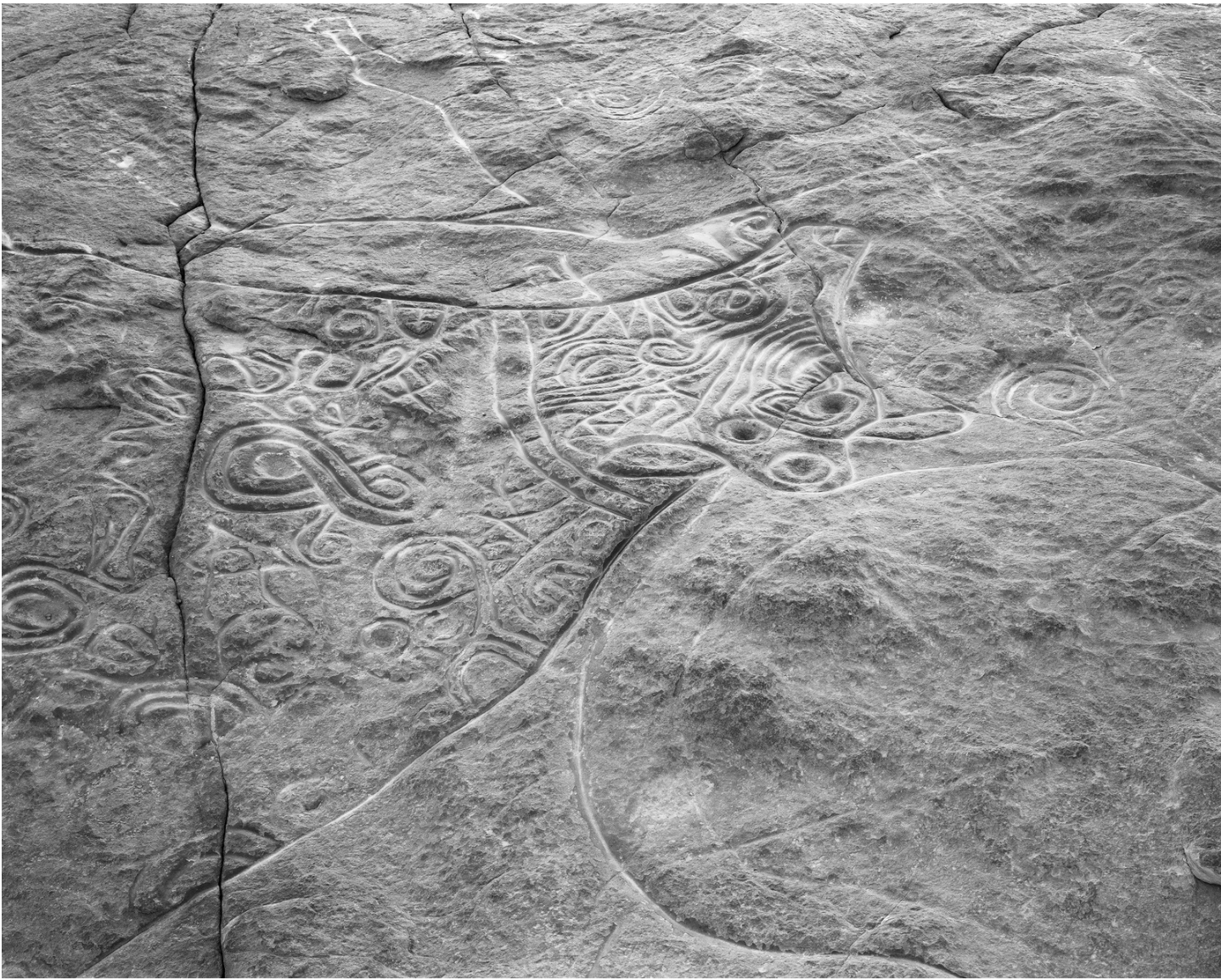 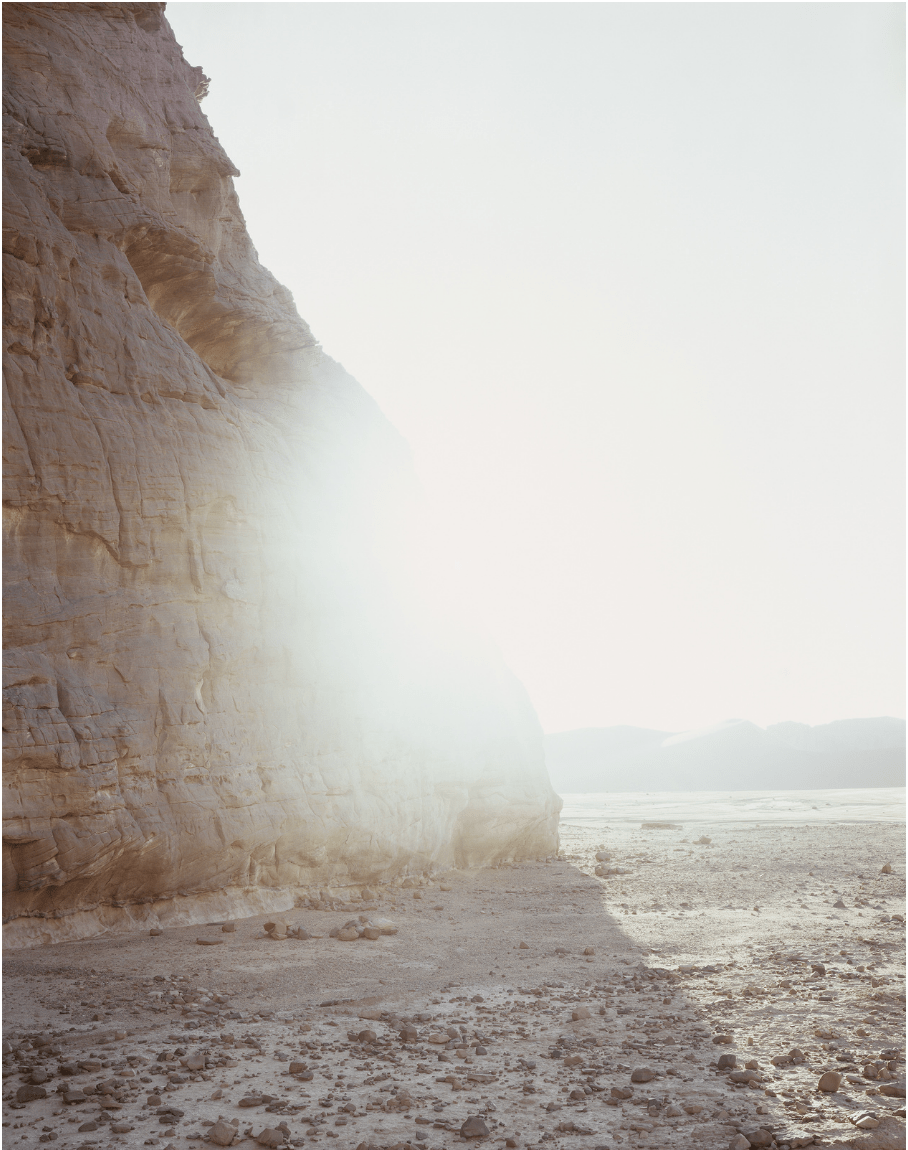 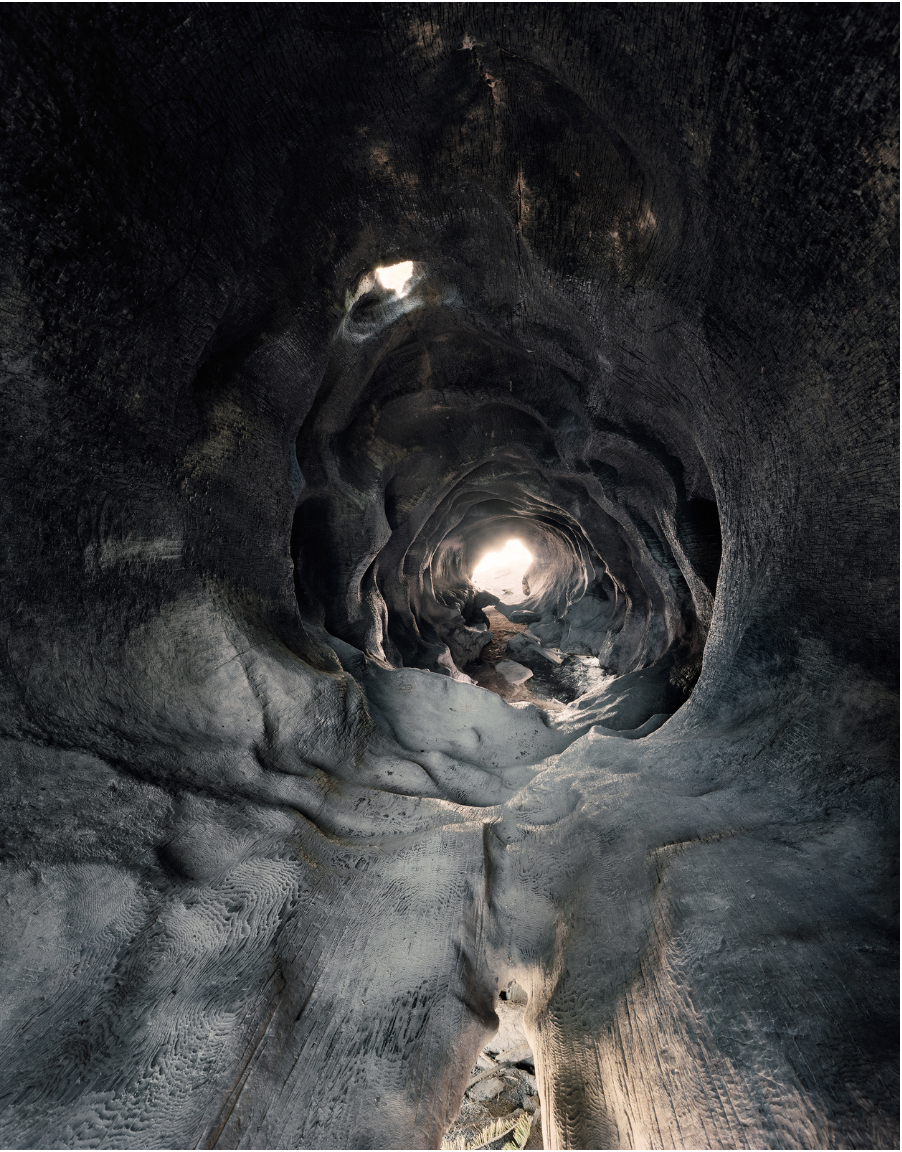 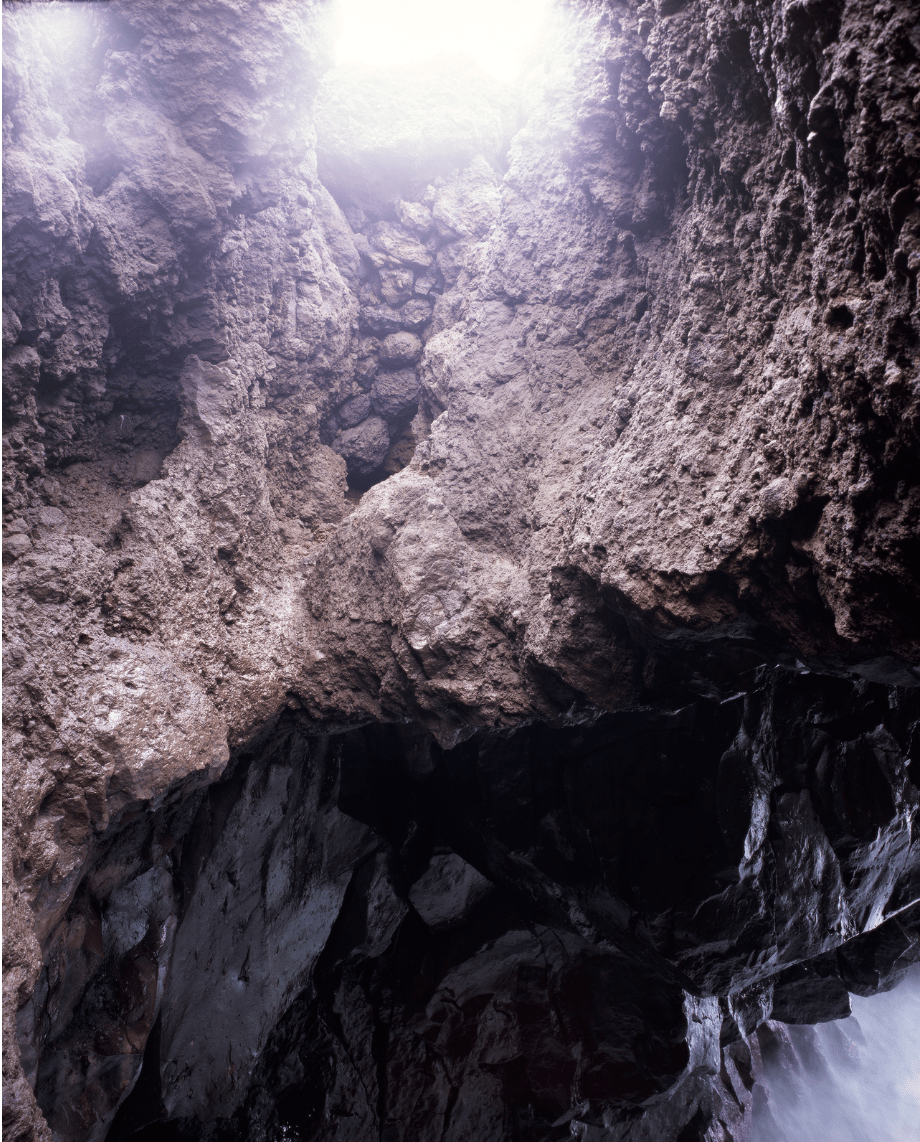 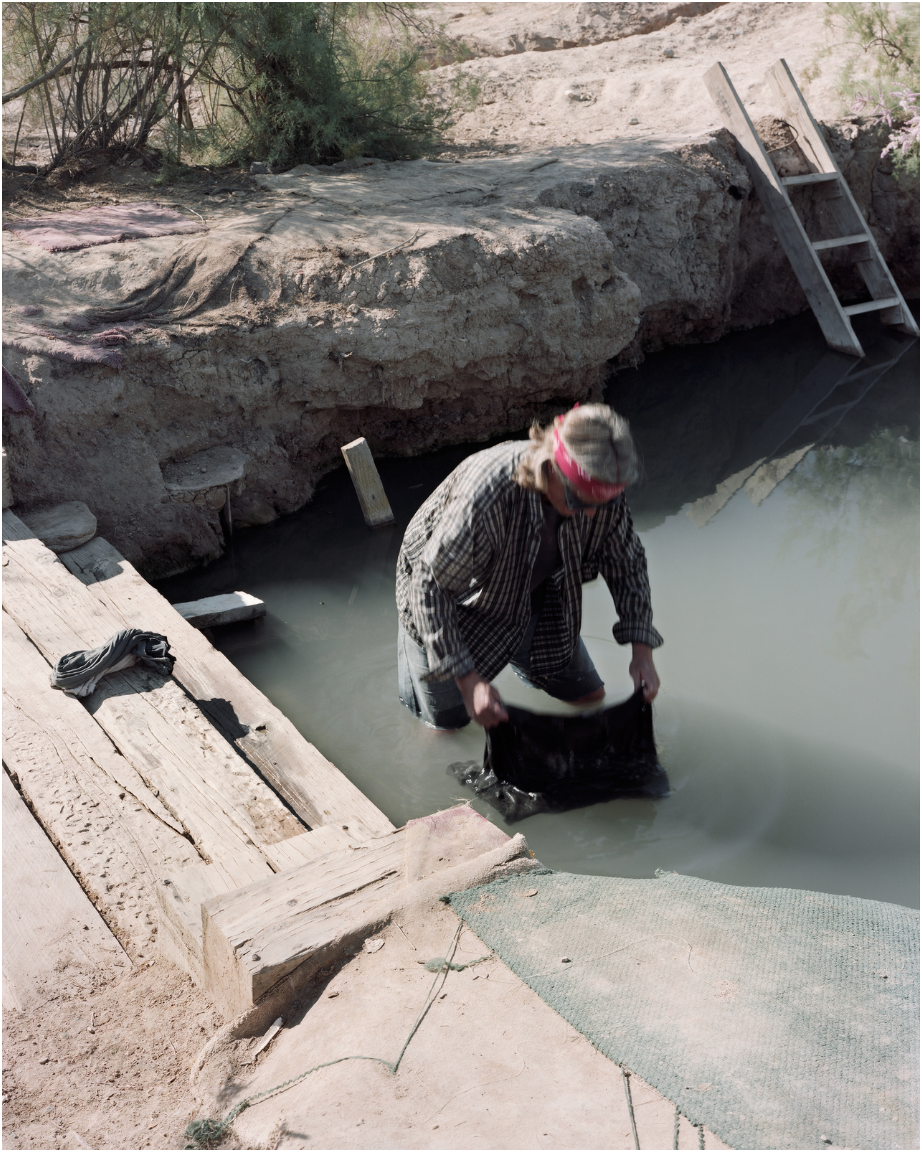 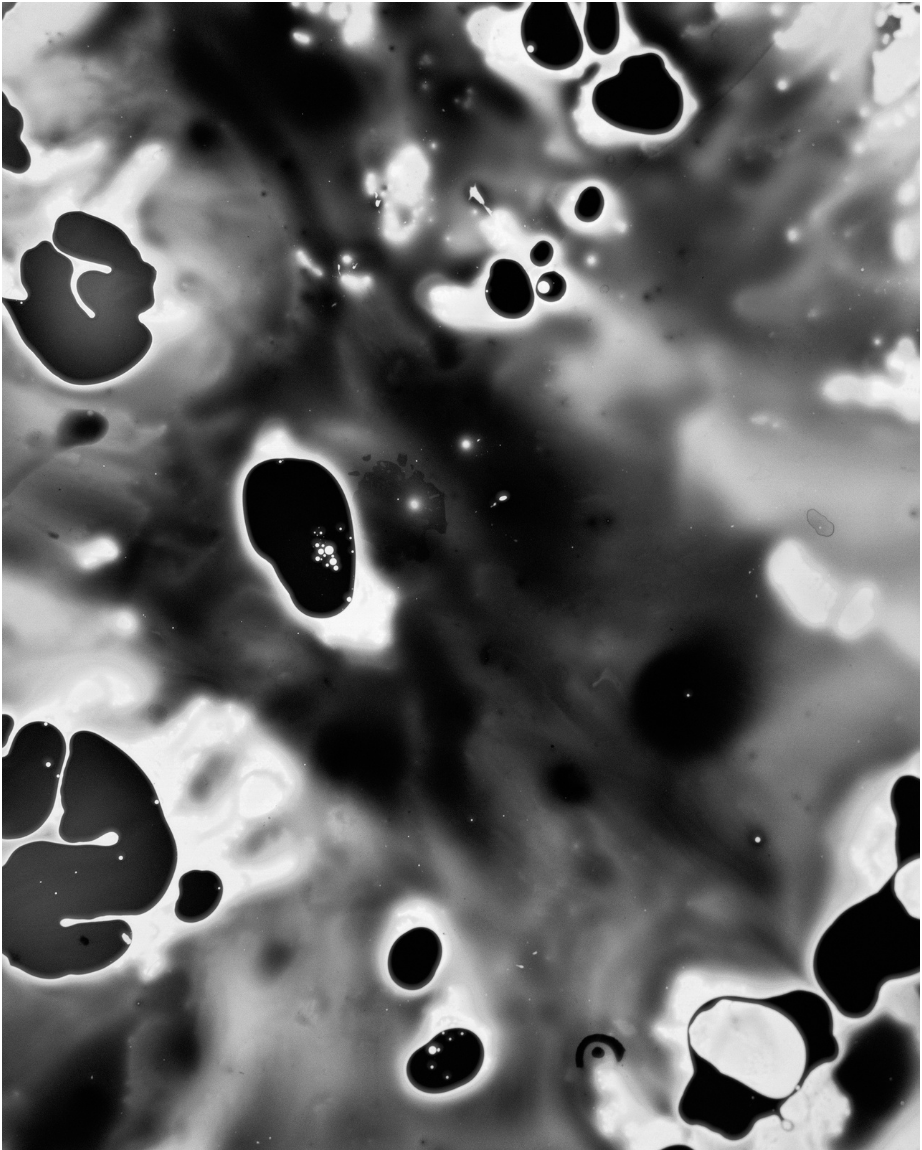 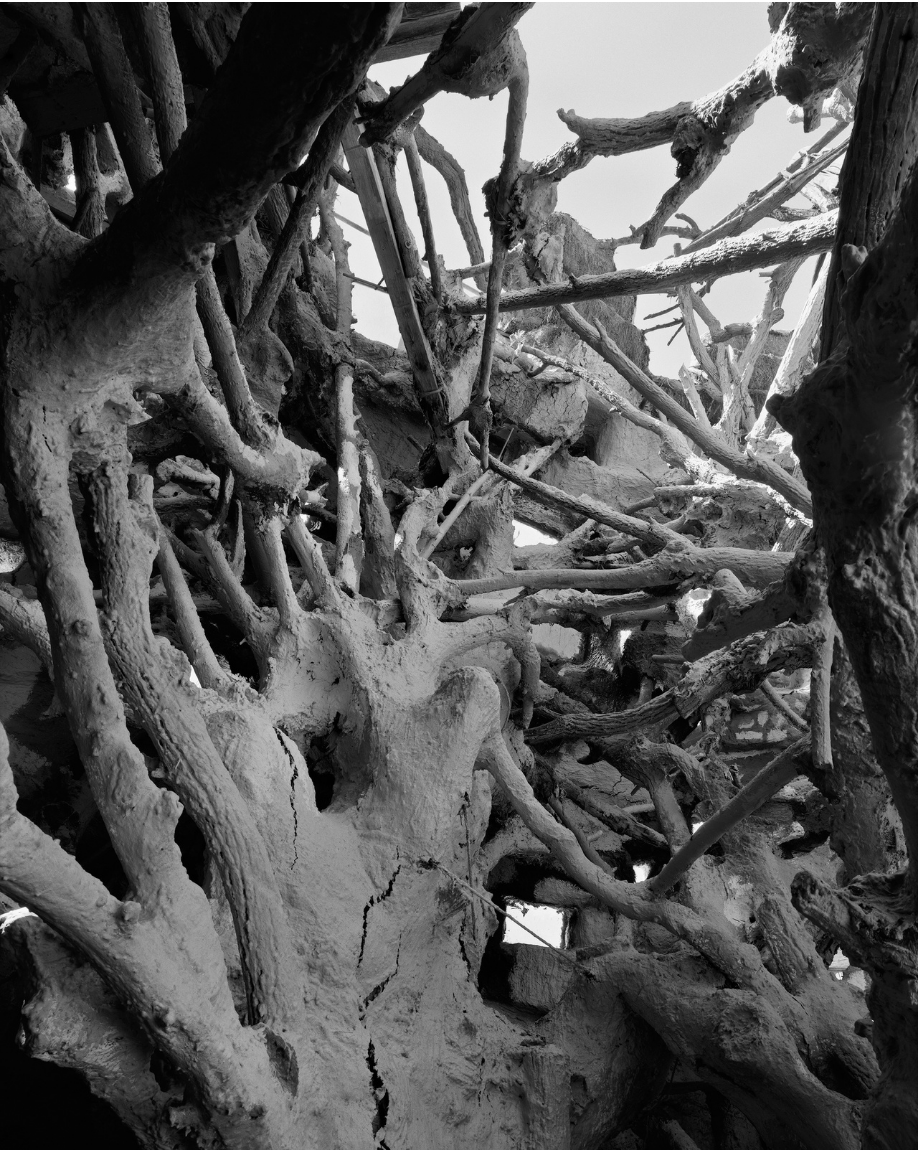 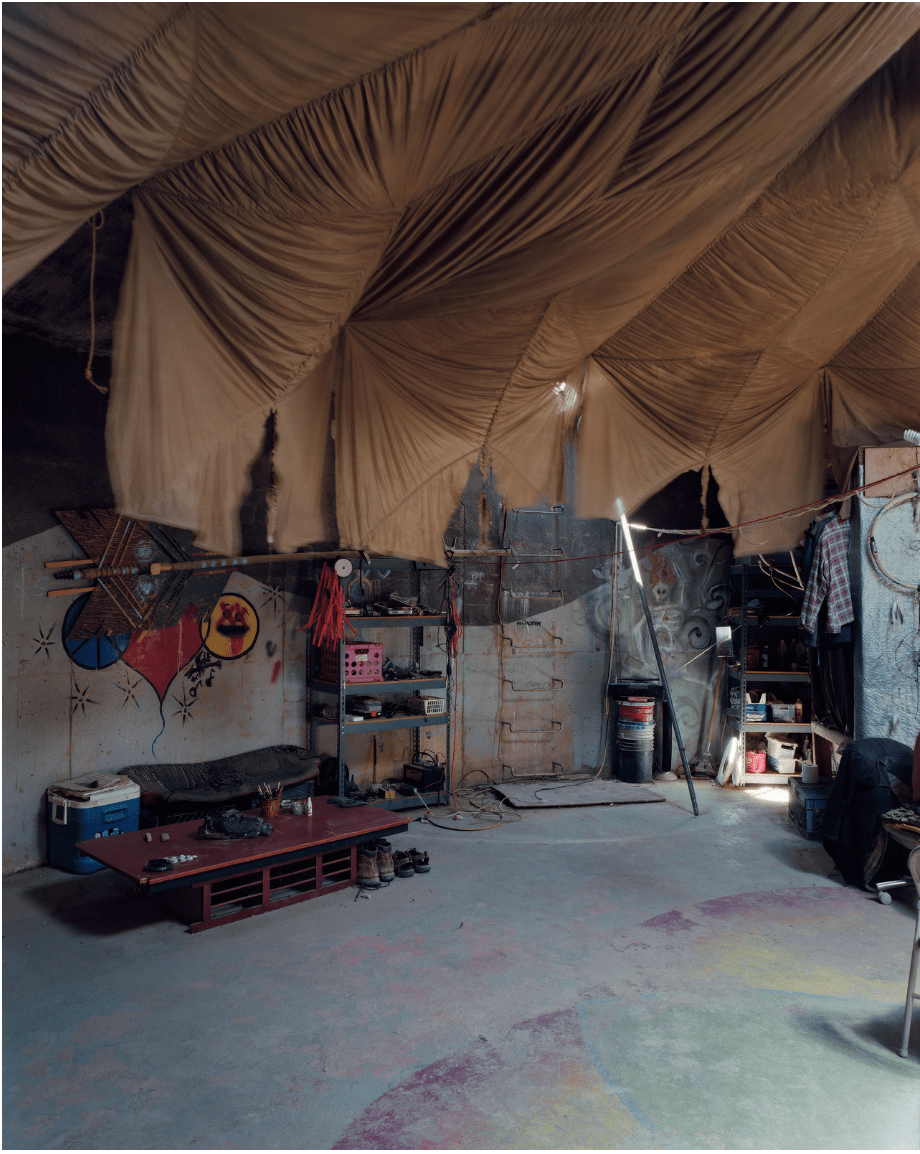 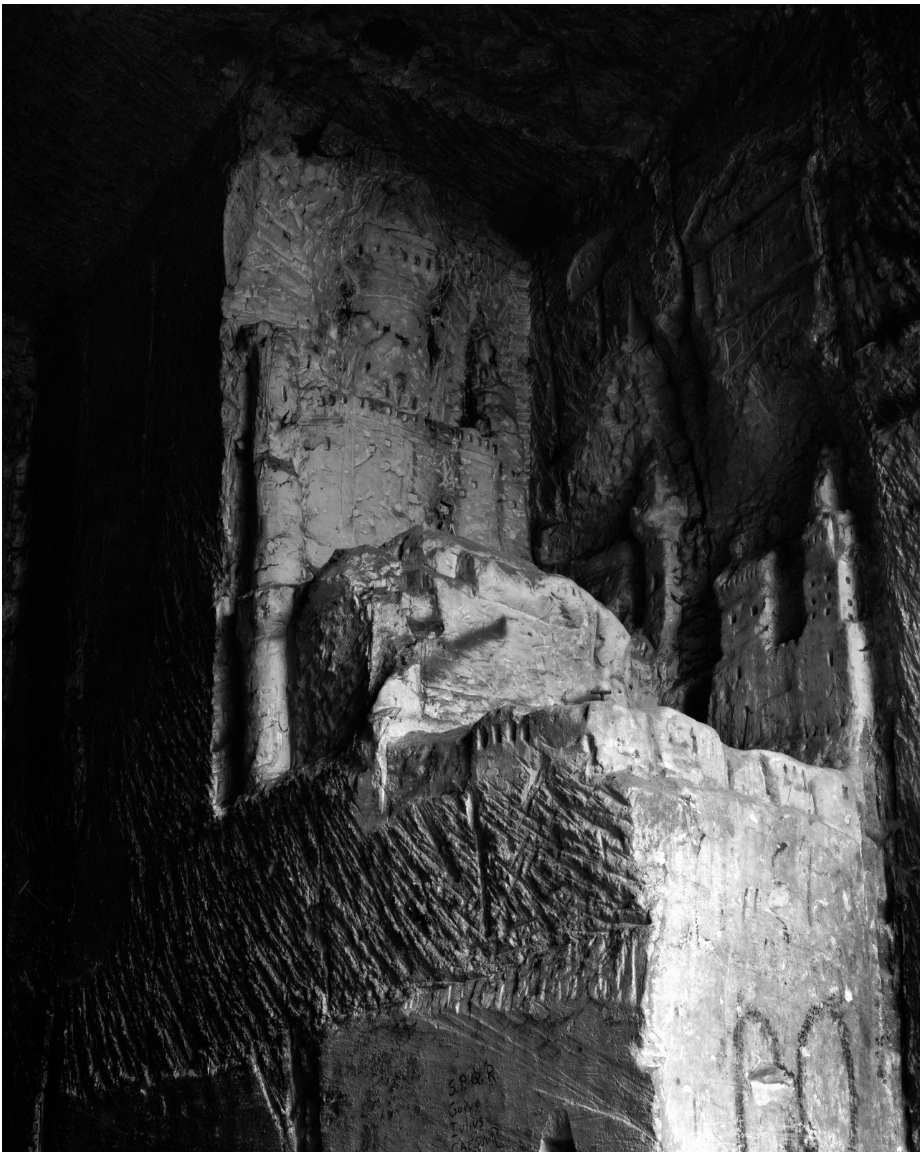 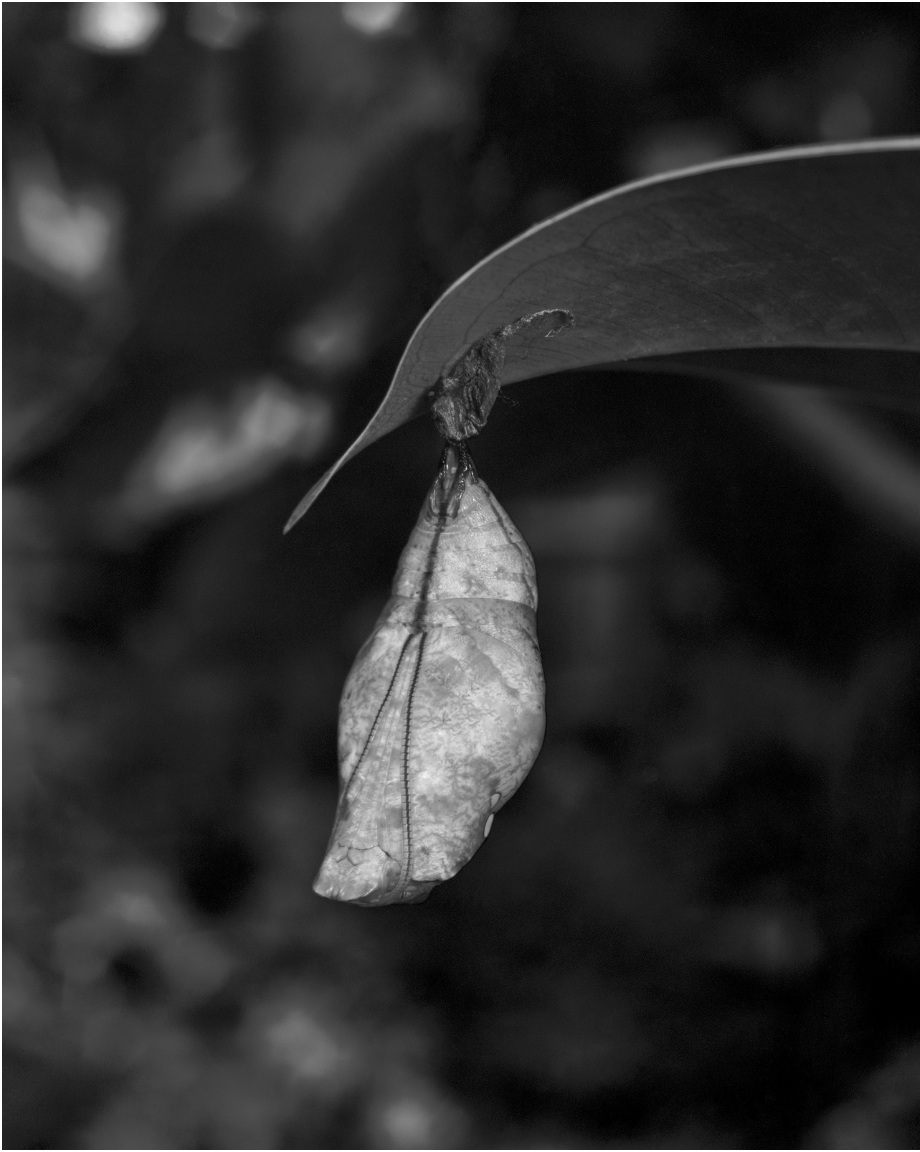 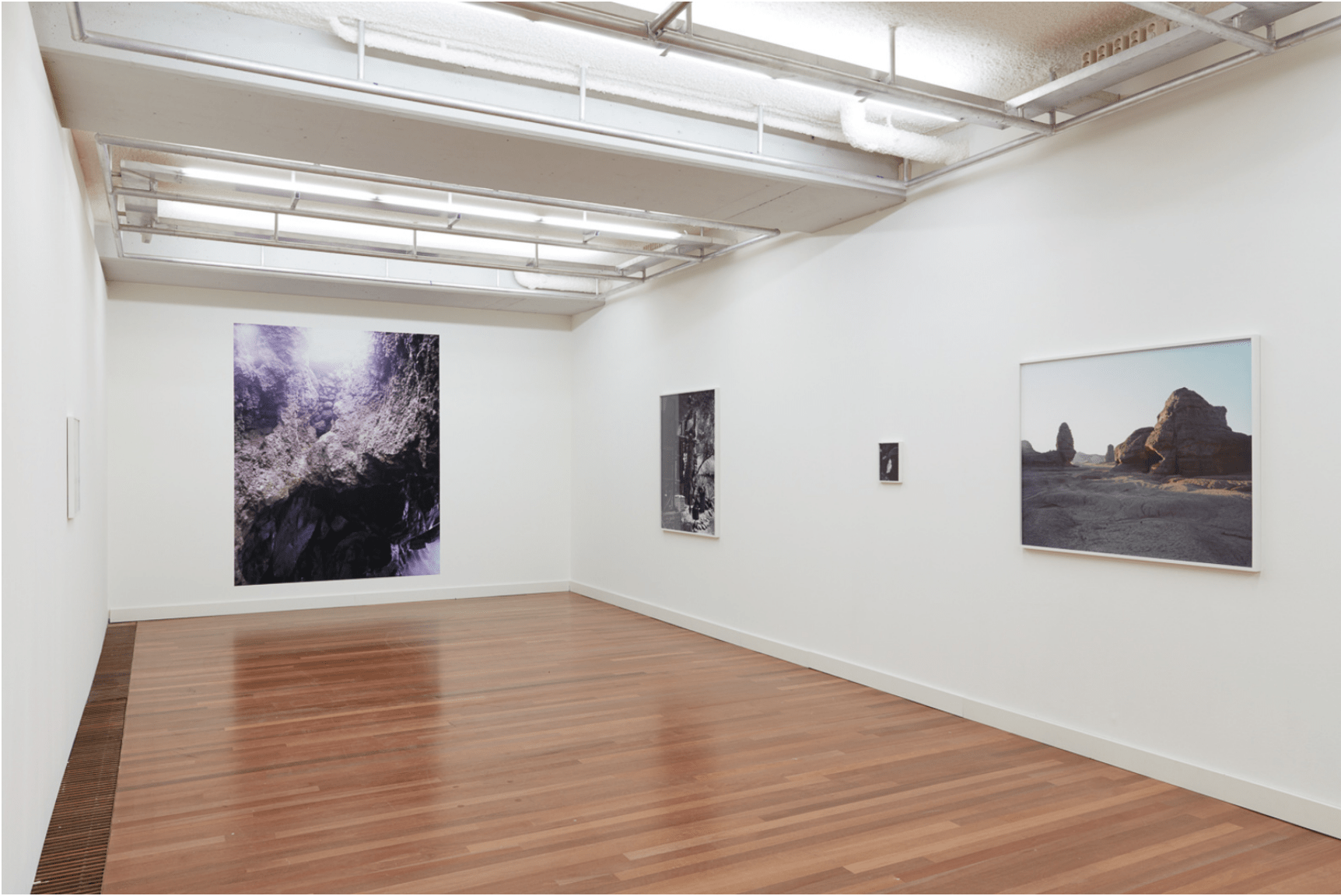 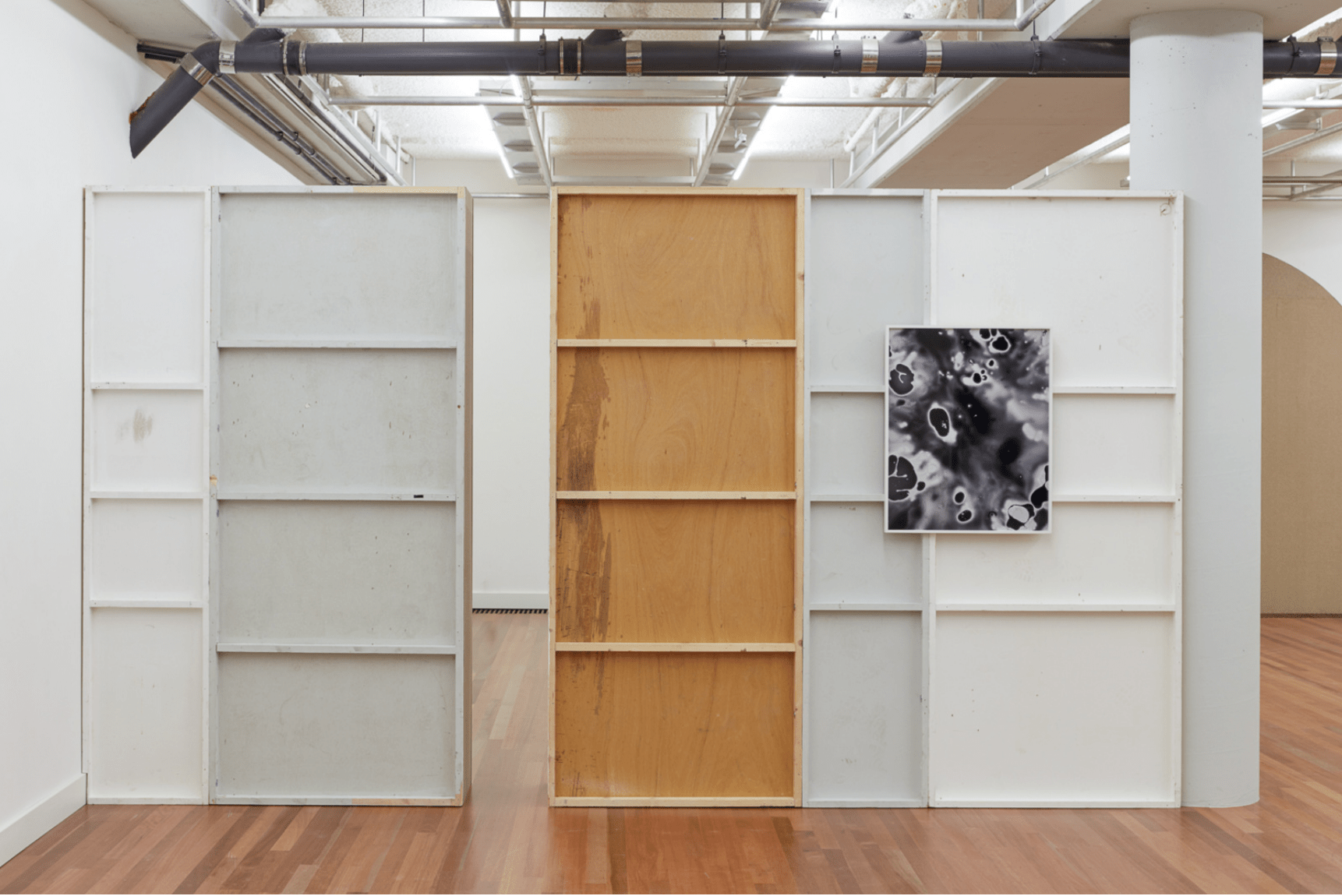 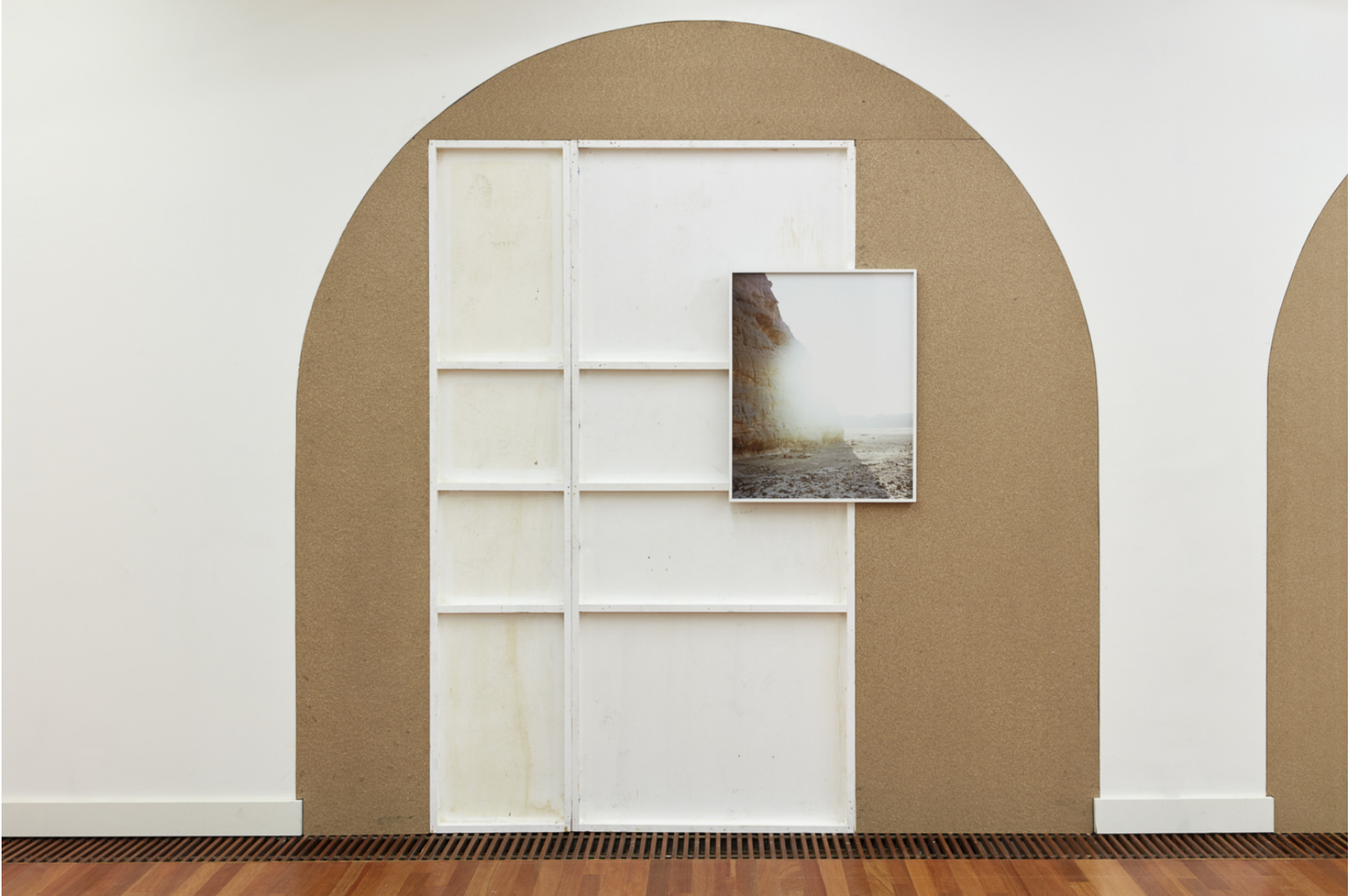 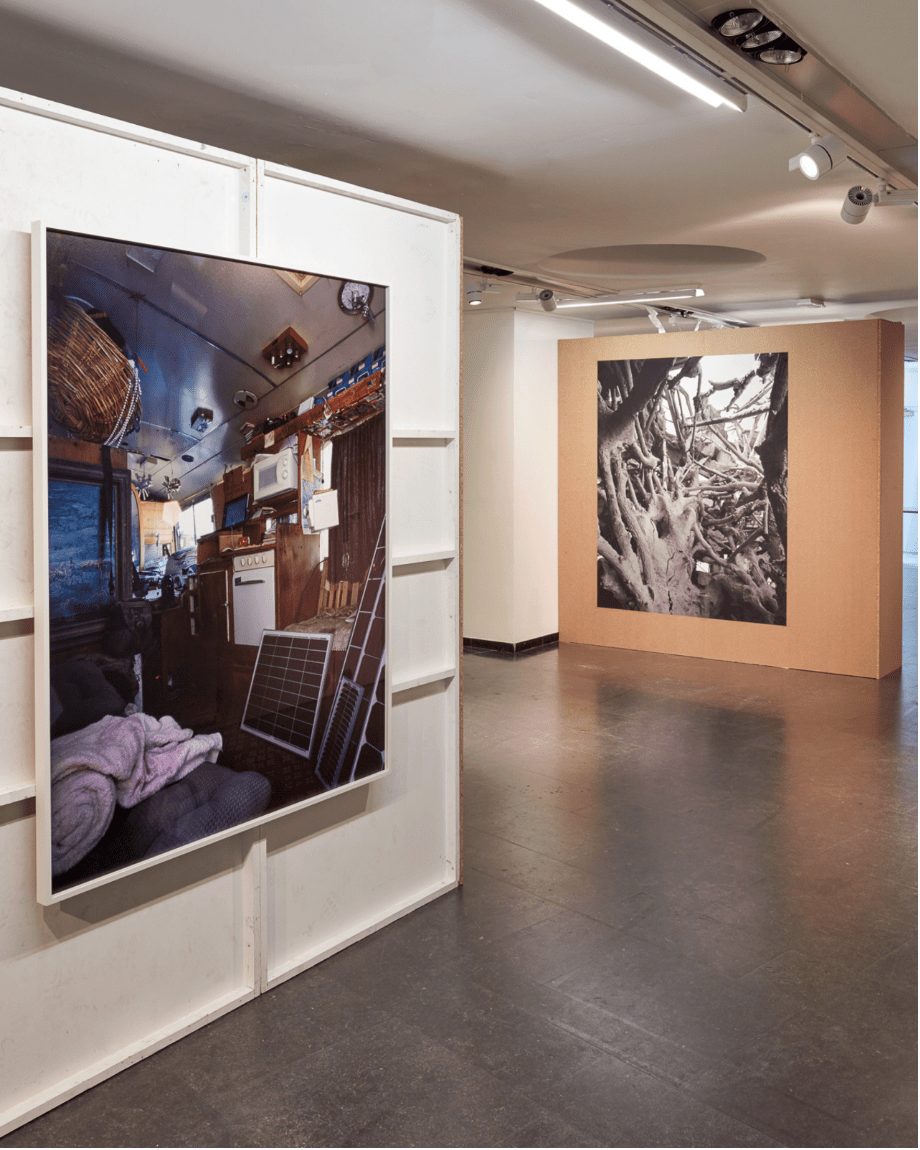 FORWARD ESCAPE INTO THE PAST

To host one of Jim Campers’ (b. 1990, Belgium) shows is not an easily accomplished task: as soon as you step into De Brakke Grond’s exhibition space and find yourself surrounded by recycled wood panels and perforated chipboards put in contrast to the whitewashed walls you realise to what extent a gallery needs to change shape in order to make it happen. Campers images expand beyond their frame and gain new significance every time they are exposed. “I prefer to call it an installation,” says Campers when we meet him before the opening of Forward Escape into the Past, an on-going project he’s been working on for almost six years, “I put a lot of effort and interest in the scenography, I design everything myself. Of course, there are limitations, but I try to manipulate the space and transform it into something else.” 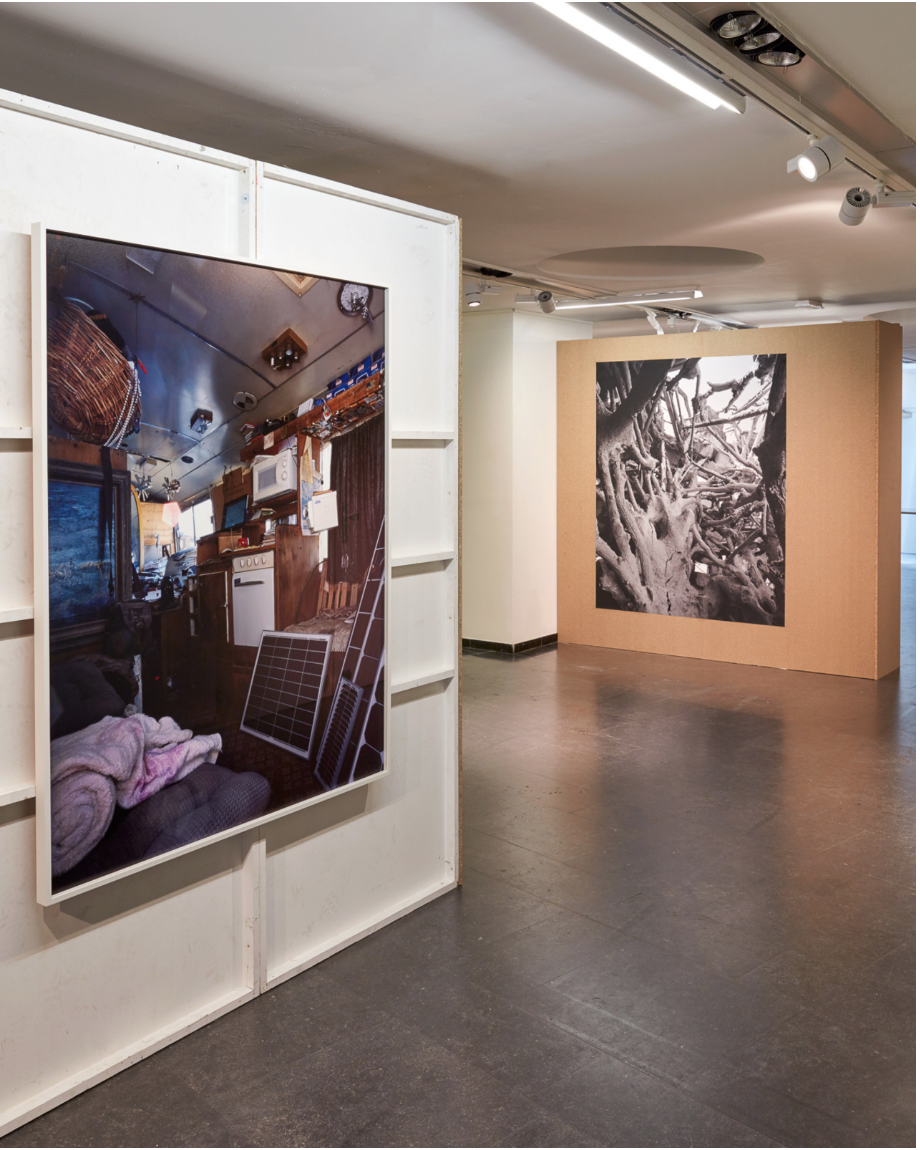 Following his first solo exhibition at M-Museum in Leuven, the Antwerp-based photographer had the opportunity to present his work at the Flemish House of Culture in Amsterdam. “I first came here a while ago and obtained the building plans. I started drawing on the maps, then I came back to check what could be used and proposed a lot of different ideas. I like to re-use scrap materials; I took boards and wooden panels that were kept in storage rooms and recycled them.” The whole process behind the creation of this installation echoes in the lifestyle ideals that originated in Drop City, a utopian artist community formed in the U.S. in 1965, which Campers researched in depth before setting out to shoot the desolated flatlands of Western U.S. “It was one of the first large communes; they wanted to start a new society, so they bought some farmland in a remote area of Colorado and began building their dome-houses with materials from surrounding scrapyards. I did the same: I came here, and tried to make something out of what was available”.
Forward Escape Into the Past – now both an exhibition and a book published by APE – combines works from two different projects, Let’s Kill the Moonlight and Intranaut. “What triggered me to start with my first series was the discovery of Theodore Kaczynski’s manifesto, Industrial Society and its Future” says Campers when asked how his interest in the counterculture period of the Sixties and Seventies affected his latest production “Kaczinsky lived in a self-built cabin in the woods for twenty-four years, while teaching himself survival skills. He believed that from the start of industrialisation our freedom has been limited, and based on this idea he founded the Freedom Club, which was actually a one-man club pretending to be much larger. He started delivering bomb packages in order to attract attention towards his message, which ultimately got published by the New York Times, before he got arrested by the FBI”.

Campers artistic production varies widely, classic landscape shots are juxtaposed to black and white textured images that hide stories waiting to be discovered. “I try to combine a lot of different styles. You see studio pictures next to photos that could be part of a reportage. By using all of those different styles and formats I try to stimulate this game of references and links that is at the core of my work. Hopefully it will encourage you to find the connection between the images. Intranaut is the perfect example” explains Campers. With his second series the photographer explored Terence McKenna’s theory about the role of psychedelics in human evolution. Here we see abstract images of liquid light or mysterious rock carvings posed side by side to studio shots of magic mushrooms. “In Food of the Gods, McKenna explains how early humans used to consume psilocybin mushrooms and how these may have caused a great leap forward thanks to their effects on vision, sexual appetite and spiritual thought. Our brain tripled in size at one point in history, and it’s not yet clear what provoked this. McKenna believes it was the mushrooms. I got curious about this controversial theory, and after months of research I travelled to the Tassili n’Ajjer Plateau in Algeria to photograph the engravings that are considered a proof of all of this”. 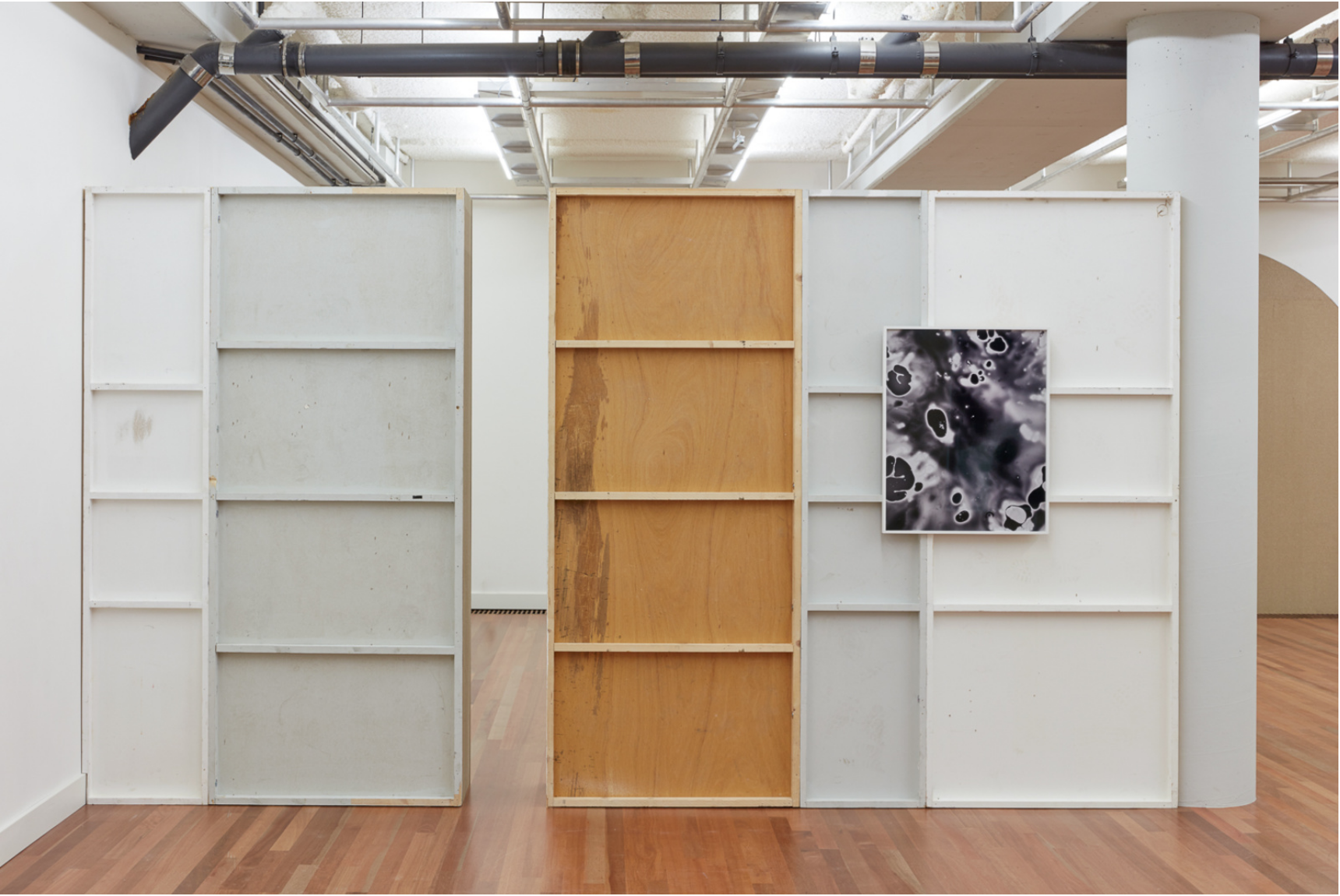 A blend of activism and nostalgia connects all of Campers’ projects, which are presented as a constantly growing archive, a transforming exploration of the relationship between past, present and future. “You might have heard about the Whole Earth Catalogue. It was a publication that existed from 1968 until 1972, the counterculture bible you could call it. The first edition was fifty pages, but then it became sixty-eight pages. It contained articles about anything that the authors found interesting, they just kept adding to it. I work in the same way, in a year this book could be something completely different”.

Forward Escape Into the Past will be on show at De Brakke Grond – Flemish Cultural Center in Amsterdam from September 15 to October 13.