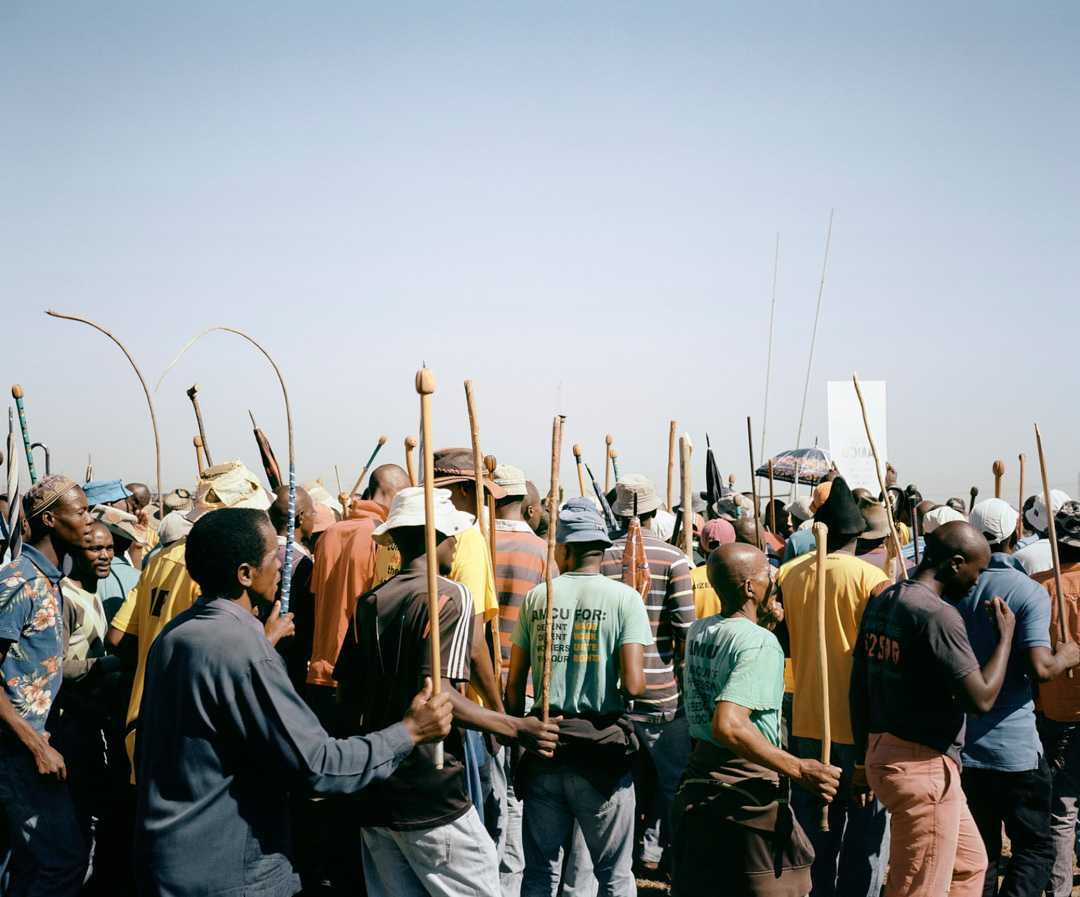 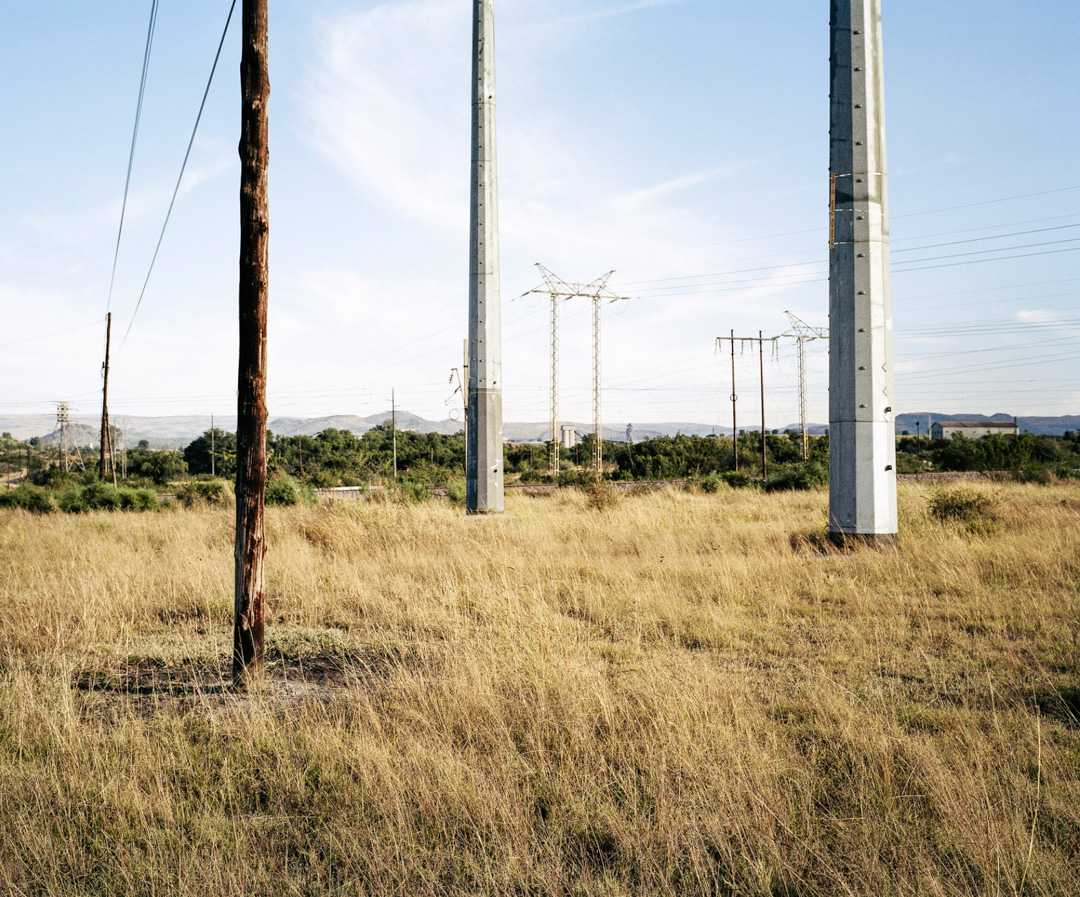 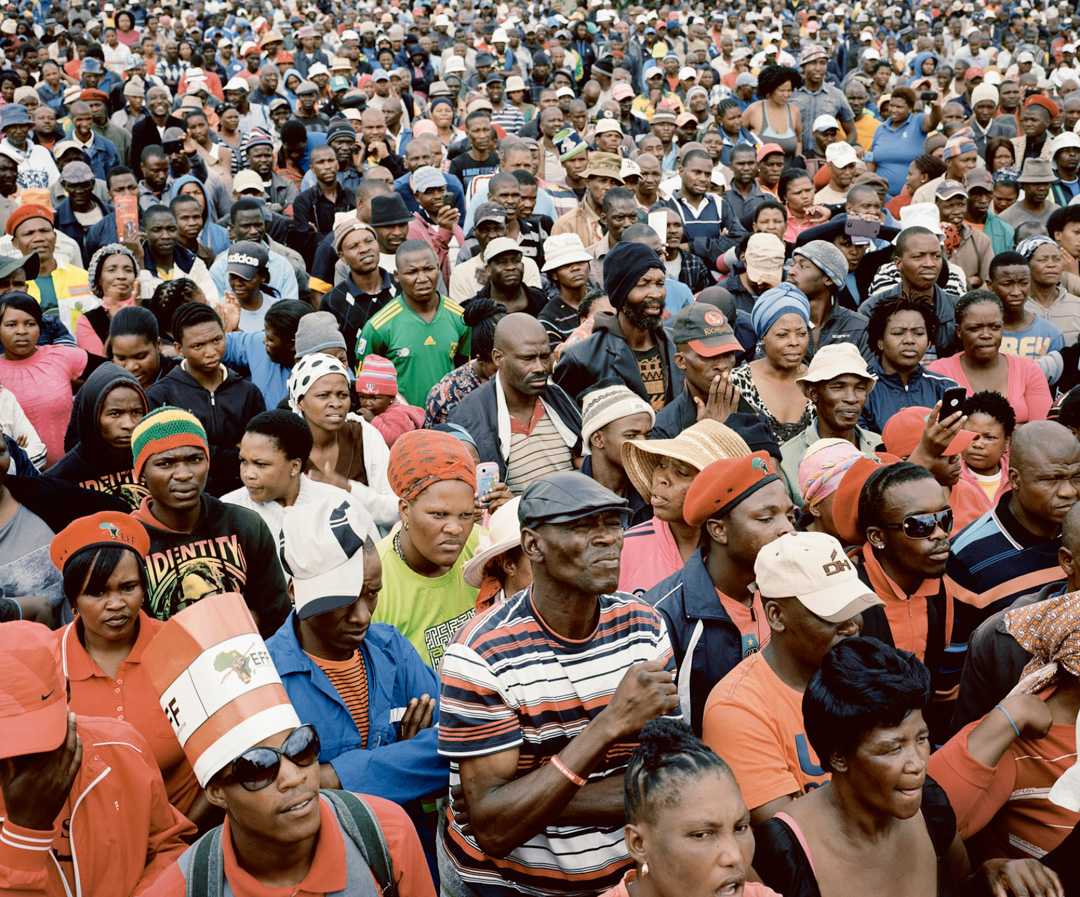 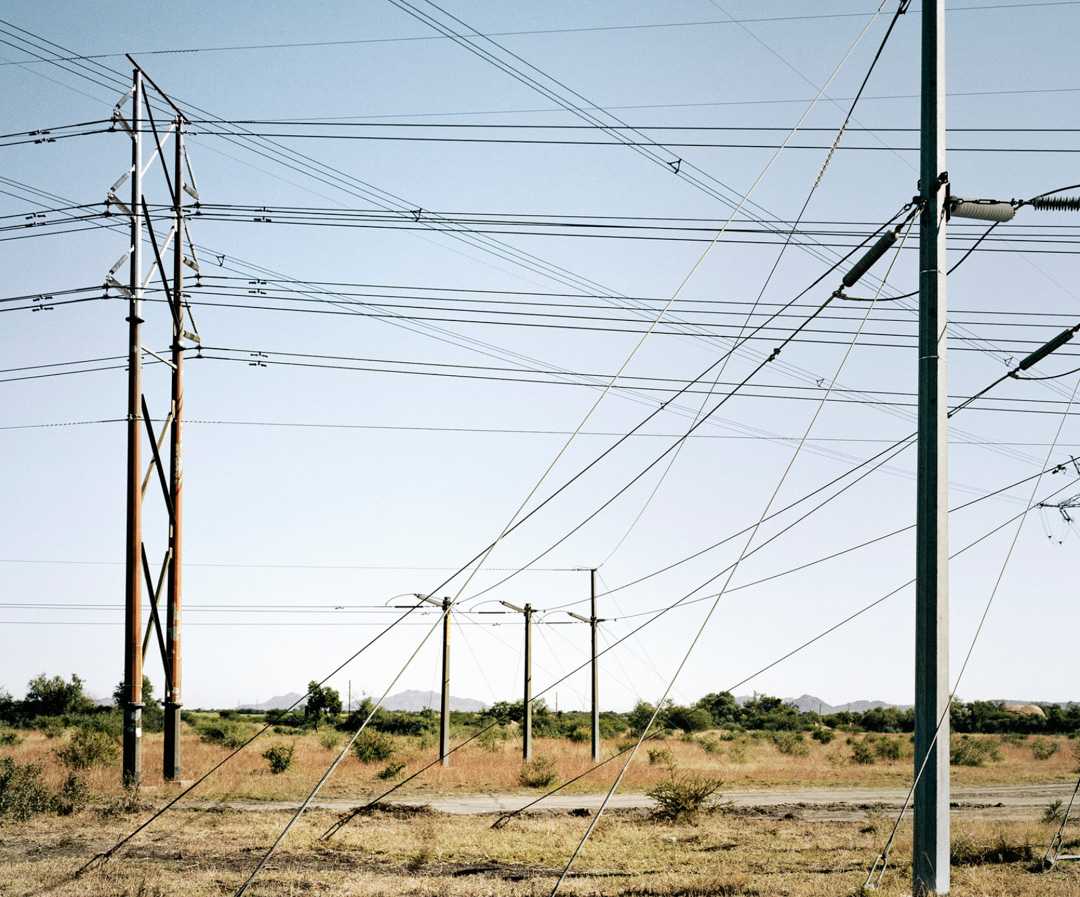 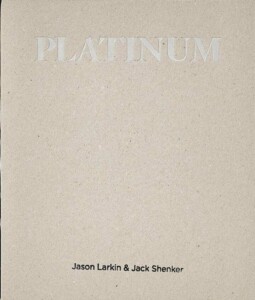 Mini-publication Platinum by photographer Jason Larkin and journalist Jack Shenker explores methods of audience engagement and outreach alongside the visual narratives of the mining communities’ unrest on which they focus. This series was created following a period of strikes by miners in 2012 in the South African town Marikana that resulted in the massacre of forty seven miners by the police; the event was depicted in the media as an act of self-defence and images utilised to represent the police’s point of view rather than the more objective reality of the circumstances. The images by Larkin explore the physical and political landscape of South Africa’s platinum mining communities, accompanied by an essay on the contemporary complexities within the nation.

The publication is constructed of four double-sided 50.5 x 41.5 cm posters, folded and bound with a taught elastic band. Presenting only eight images in total, each poster depicts a mass gathering on the one side, and the landscape on the reverse. This is a visual play between those who work on the land and the industry, the money, power and platinum that benefit so many others, but from which the inhabitants do not see the money.

These few ambiguous images of these gatherings rely upon Shenker’s essay (in English and Xhosa) to give them context. Each mass of workers and inhabitants gathers with a different purpose; residents queue to vote, queue for transport home after striking, unite at a miners’ rally and gather in the hope of finally receiving the benefits promised to them upon the end of the apartheid and changing the circumstances in which they live. Larkin captures these gatherings by stepping back to capture a holistic scene of the event, then balancing these shots with close-ups of the vast crowds: choosing one approach and then alternating it with the other in the next image. The crowds that gather in Larkin’s images are only fragments of the unrest that shapes the landscapes in rural South Africa. By giving insight into the unrest in the nation that is not usually disclosed by the mainstream media, Larkin demonstrates the amount of progress that is still necessary in the country and highlights those governing benefit from the country in its current state.

The non-conventional book format makes the images accessible and non-complex to view, while also awarding attention to the writings of Jack Shenker within the publication. Lengthy, but insightful, his text enables consideration into the potential narratives that could be attributed to these gatherings and how they can be manipulated by government, media and police, as the misuse of imagery and misinterpretation of the situation was exploited during the massacre. The shifting the camera angles questions the viewpoint and the reality of what is truly there.

All images courtesy of Flowers Gallery, London. Platinum accompanies the publication of Larkin’s Waiting that devotes further attention to the complex realities that exist within South Africa two-decades after the end of the apartheid. Platinum can be purchased online.