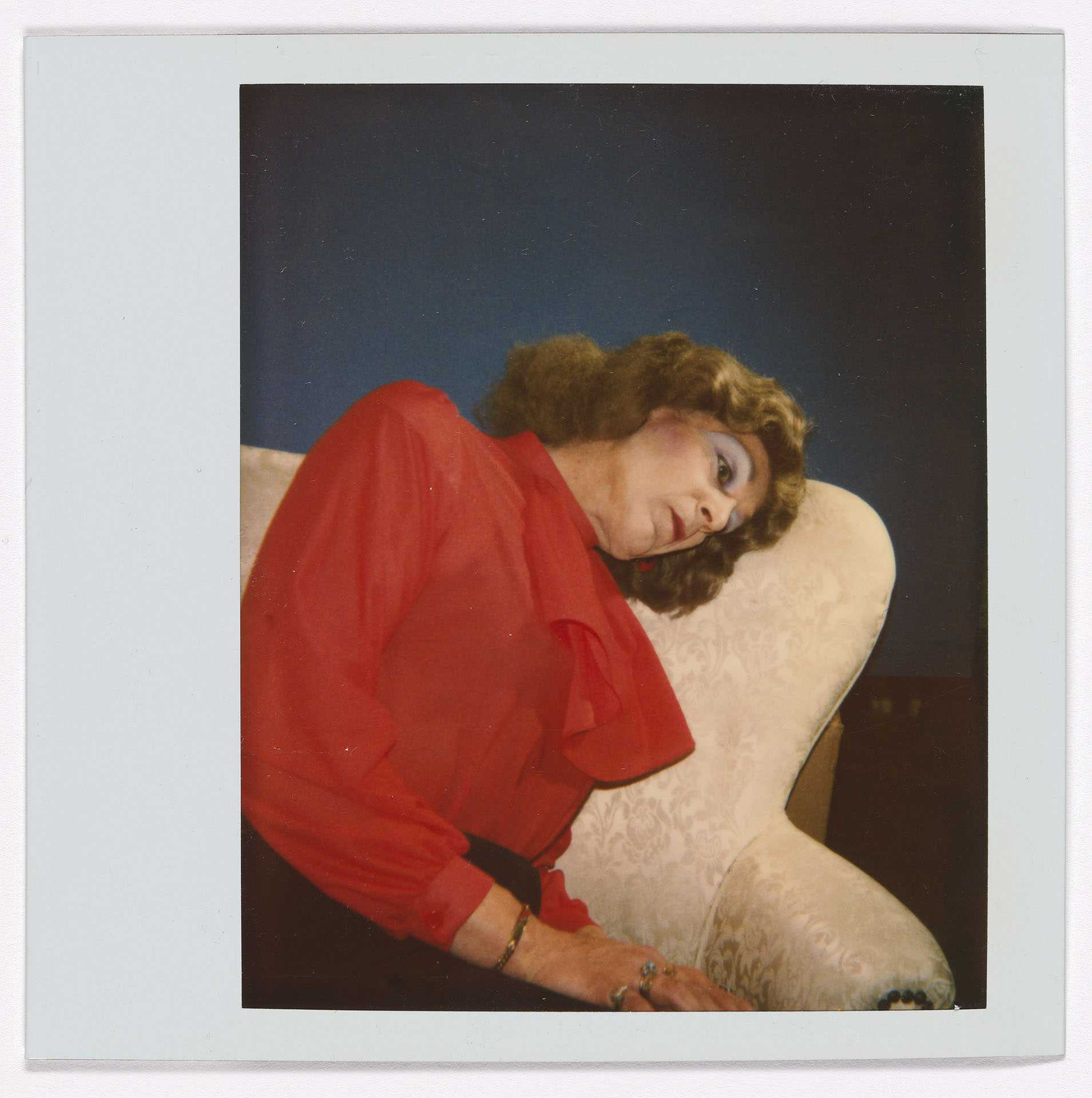 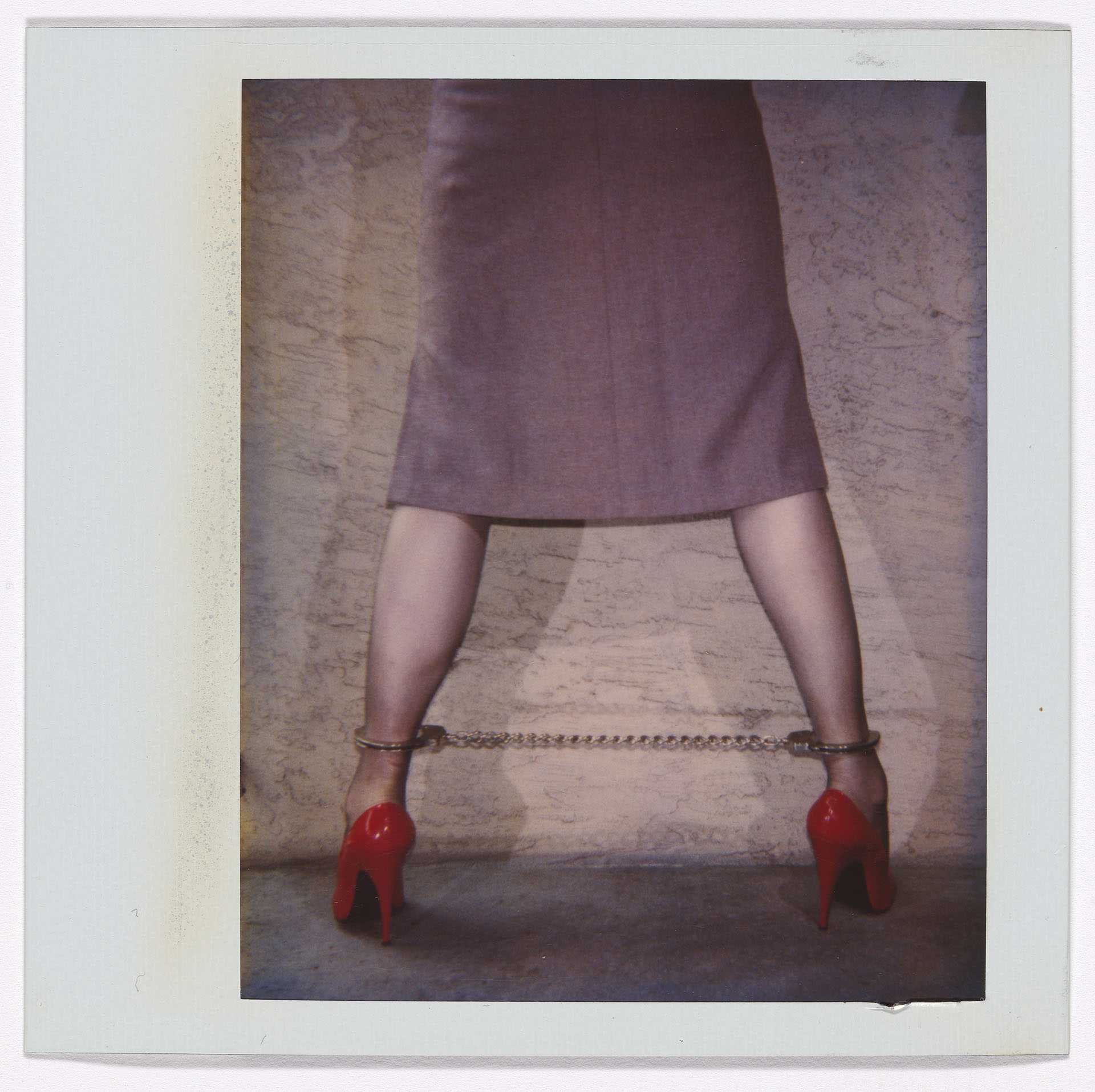 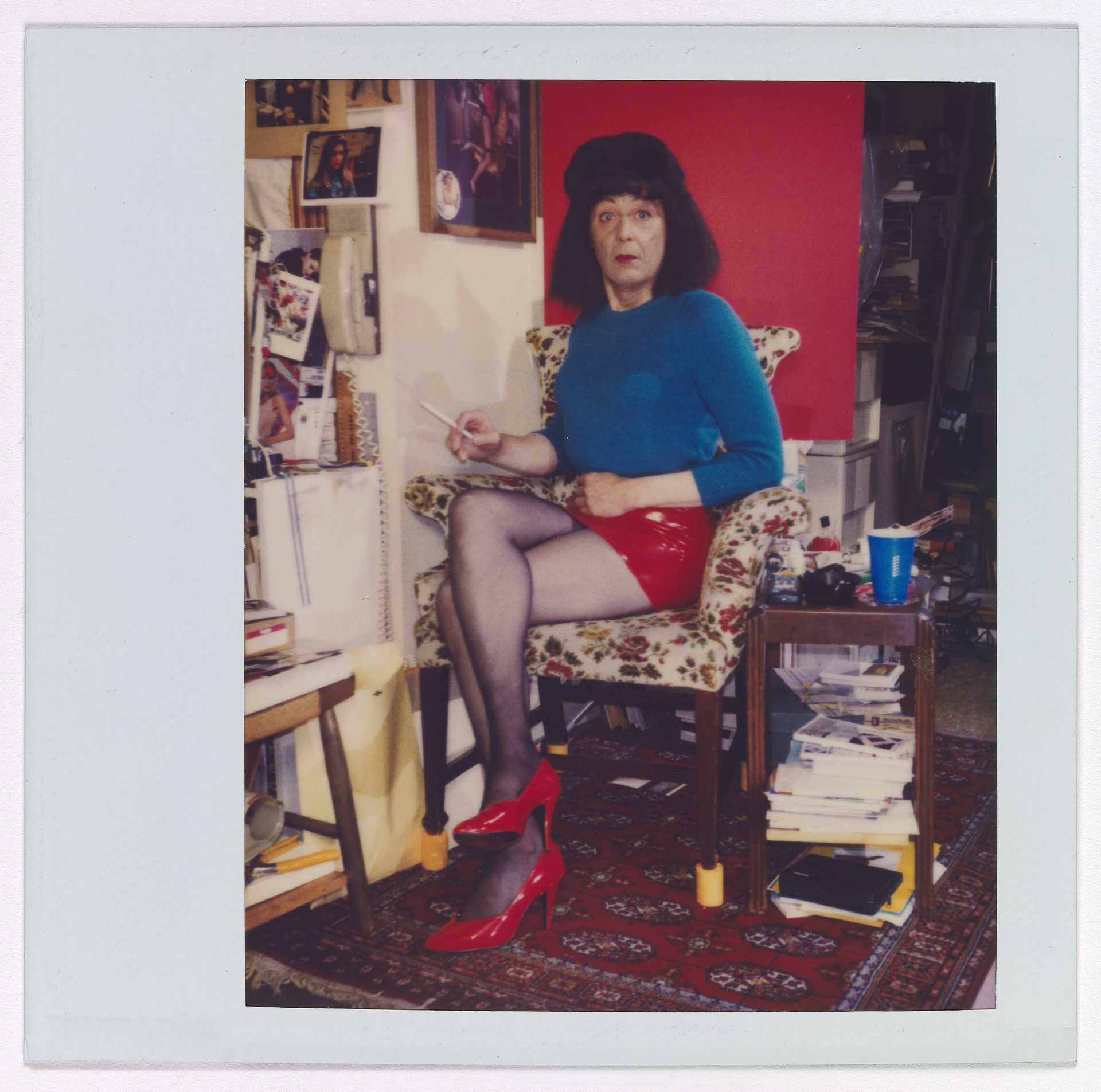 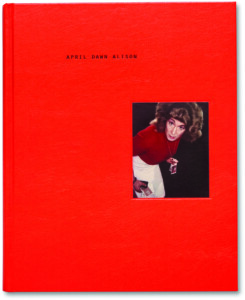 Born Alan Schaefer in the Bronx in the early 1940s, April Dawn Alison became herself by providing a place to play, a stage, as it were, for the persona trapped inside. But this might have been a rather lonely game: neither Alan’s family nor his neighbours knew about April until after (s)he – or they – died, in 2008. One cannot help but ask what Alan Schaefer’s life and artistic career might have been, had he felt confident or safe enough to step out into the world as April Dawn Alison.

“One is not born, but rather becomes, a woman,” wrote Simone de Beauvoir in one of the most famous articulations of the difference between sex and gender. By this, de Beauvoir does not mean us to believe that no one is born with reproductive organs, but that the social role of ‘woman’ (or, for that matter, ‘man’) comes from a collection of behaviours into which we are socialised. The distinction is crucial for understanding most feminist and queer theories and the variety of human identity more generally.

Judith Butler, a prominent theorist in gender studies, argues in her essay Performative Acts and Gender Constitution (1988) that gender is an identity instituted through repetition of acts. Yet, ‘performativity’, though it uses a theatrical metaphor, is not the same as ‘performance’. Rather, the technical term ‘performative’ means for Butler an act that not only communicates but also creates an identity. This creative aspect of becoming oneself is what makes photography such an interesting ‘partner’ for people who feel the urge to activate their non-binary, unfixed, and thus fluid gender.

Most famously, it was Claude Cahun – born Lucy Schwob in Nantes, France in 1894 – who challenged gender roles in a society where these were rigidly enforced. A transgender Jewish lesbian (she and her stepsister were lovers) and anti-fascist artist, Cahun created a series of theatrical self-portraits that David Bowie later described as “really quite mad, in the nicest possible way”. 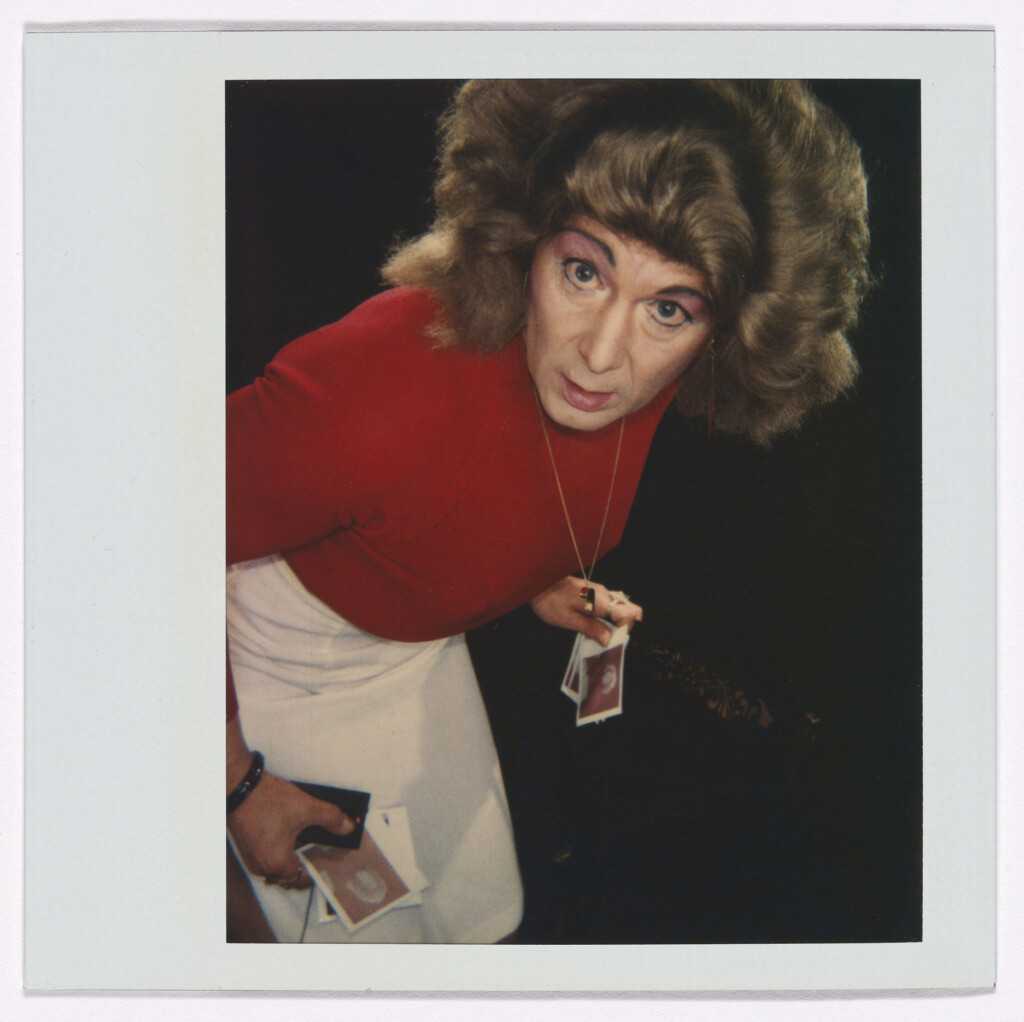 “She transforms situations, but not her face”

Since its invention in the 19th century, photography has been an important medium for exploring transgender and gender non-conforming identity. Portrait photography, specifically, has been a primary way to document the trans experience. Important early images within this genealogy furthermore include those made by a black female impersonator of William Dorsey Swann, the first reported drag queen and queer activist in the United States, as performed in the early 20th century and by German photographer Baron Wilhelm von Gloeden (1856– 1931), whose ancient Greek-influenced, homoerotic tableaux are an early queer image archive.

Throughout the twentieth century, queer and transgender photographers continued to deploy portrait photography to address their fluid gender performances, often while applying creative and conceptual approaches. Now, with the recent discovery of the many Polaroids made by April Dawn Alison, another chapter can be added to this long and colourful history.

“It’s impossible to know to what degree Alison was aware of queer predecessors like Claude Cahun or Pierre Molinier, whose photograph Les jambes de Jean Meunier (1972) finds echo in Alison’s many fetishised, stockinged legs, “writes Fanny Singer in response to the work. “Likewise, the drama of Alison’s poses, their implicit narrative and conflation of artist and subject recall the auto-scrutinising work of Cindy Sherman in the 1970s. Then there’s Andy Warhol in drag in 1981 or Robert Mapplethorpe in bondage in 1974. Whether or not Alison was looking outside for inspiration, she had a keen understanding of what makes a good picture.”

April Dawn Alison was the female persona of Alan Schaefer – a commercial photographer who lived in Oakland, California. The photographs were made over the course of more than 30 years and discovered upon the artist’s death in 2008. An estate liquidator was hired to sell the belongings left in Schaefer’s home, which is where 9,200 Polaroids made by and of Alison were discovered. The images were later sold to Andrew Masullo, a local painter who donated the archive to the San Francisco Museum of Modern Art. The SFMOMA presented the first museum exhibition of Alison’s impressive archive in 2019 (July 6 – Dec 1).

In an article for Aperture, critic Glen Helfland remarks how Alison is a consistent, recognizable individual: “She transforms situations, but not her face”. Significantly, she adopts secondary personas – maid, housewife, catalogue model, pin-up, sex slave – lending her self-portraits metafictional playfulness and conceptual density but the concept differs from Cindy Sherman, for example, who famously creates myriad intriguing tableaux and characters, from screen siren to clown to ageing socialite.

Whereas Sherman has captured herself in a range of guises and personas, Alison – though also working with iconic selves – remains ‘Alison’ who, as Helfland concludes, “doesn’t always pass for a woman, but her pictures immediately convey the tropes.” The performance is more Brechtian, in the sense that it relates to Berthold Brecht’s theatrical technique to prevent the audience from losing itself completely in the narrative. In short, Alison is performing while also not hiding the performance.

“Who was the performance for?”

April Dawn Alison was certainly not the first trans person using photography to construct identities. But she was, as critic Hilton Als aptly noted in the recently published book on the archive, “the photographic object of her own dreams”. The extensive selection of ‘selfie’ Polaroids as recently discovered is indeed of extraordinary quality; an intimate personal archive documenting a fully realised self, unseen by others, exploring a wide range of feminine archetypes drawn from advertising, movies, and fetish and pornographic imagery.

Posing in the safety of her own home, Alison presents herself in her full beauty and humanity in a way she may not have felt free to do in public. An arresting sense of humour prevails: many images show Alison posed on her back, legs splayed, feet in the air, her face contorted in mock horror or feigned surprise. Others show her from behind: svelte waist, shapely legs, formfitting skirts, a mane of freshly brushed hair – a woman, unmistakably. The result hints at a rich inner life filled with pathos, revealing as much joy as loneliness. “It is a way of seeing yourself as you believe yourself to be, or as you may not be in the world yet,” says Erin O’Toole, associate curator of photography at SFMOMA, in an interview with the British Journal of Photography, for the occasion of the show (2019).

The question remains: who was the performance for? The images were kept hidden and were not known to exist by the public or, it seems, by any close friend throughout the life of Alan Schaefer. There was no audience; no exhibitions; no books; no interviews. A singular and long-term exploration of a non-public alter-ego, a performance executed within the realm of the home, off-stage, in privacy, and in secret. Why? A plausible answer for the enigma comes from Zackary Drucker’s essay in the book: “Many trans people never find spaces to express or manifest their true selves, and they let their authentic interior worlds die with their bodies.”

The exhibition April Dawn Alison was shown at SFMOMA (San Francisco Museum of Modern Art) in 2019. The accompanying book is published by MACK. In addition to a wide selection of Alison’s Polaroids, it contains essays by Hilton Als (American writer and theatre critic for The New Yorker), Zackary Drucker (American transgender multimedia artist, LGBT activist, actress, and producer of smash US television series Transparent) and Erin O’Toole (associate curator of photography at SFMOMA).

On 30 October 2020, Studio A, a brand-new collaborative project between the independent music label Erased Tapes and MACK, invited musician and artist Douglas Dare to perform three newly created pieces inspired by April Dawn Alison. The publishing house will continue to explore the boundaries of art and music with these kinds of live streamed events.

The full story of William Dorsey Swann will be told in the forthcoming biography “House of Swann: Where Slaves Became Queens – And Changed the World” by award winning journalist and historical researcher Channing Gerard Joseph. It will be released in 2022 by Crown (Penguin Random House) in North America and by Picador (Macmillan) in the United Kingdom and 79 other nations and territories.