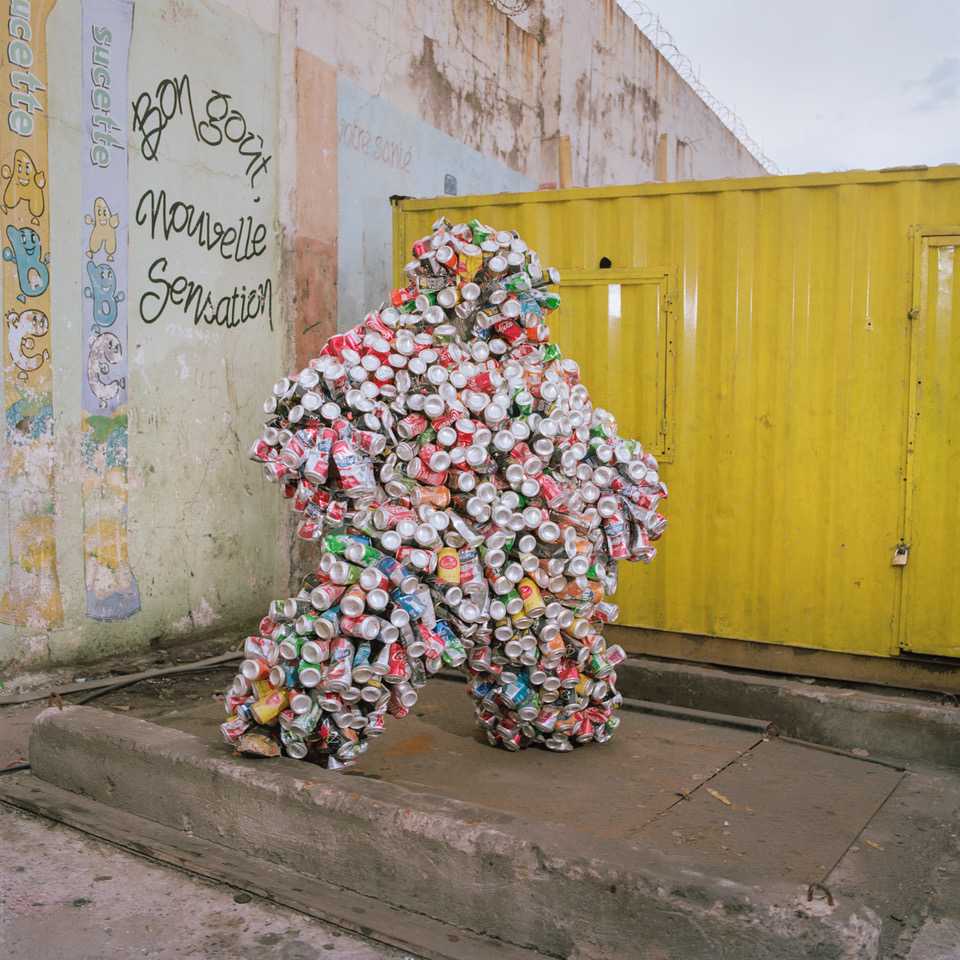 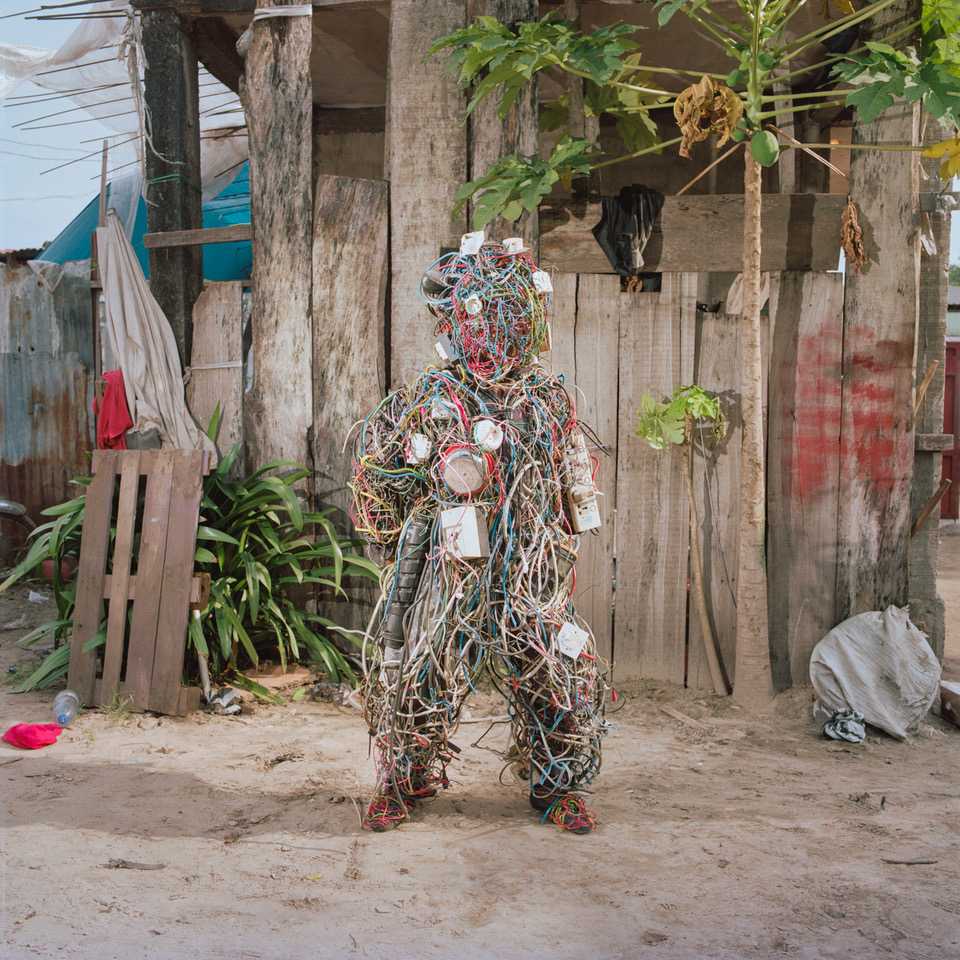 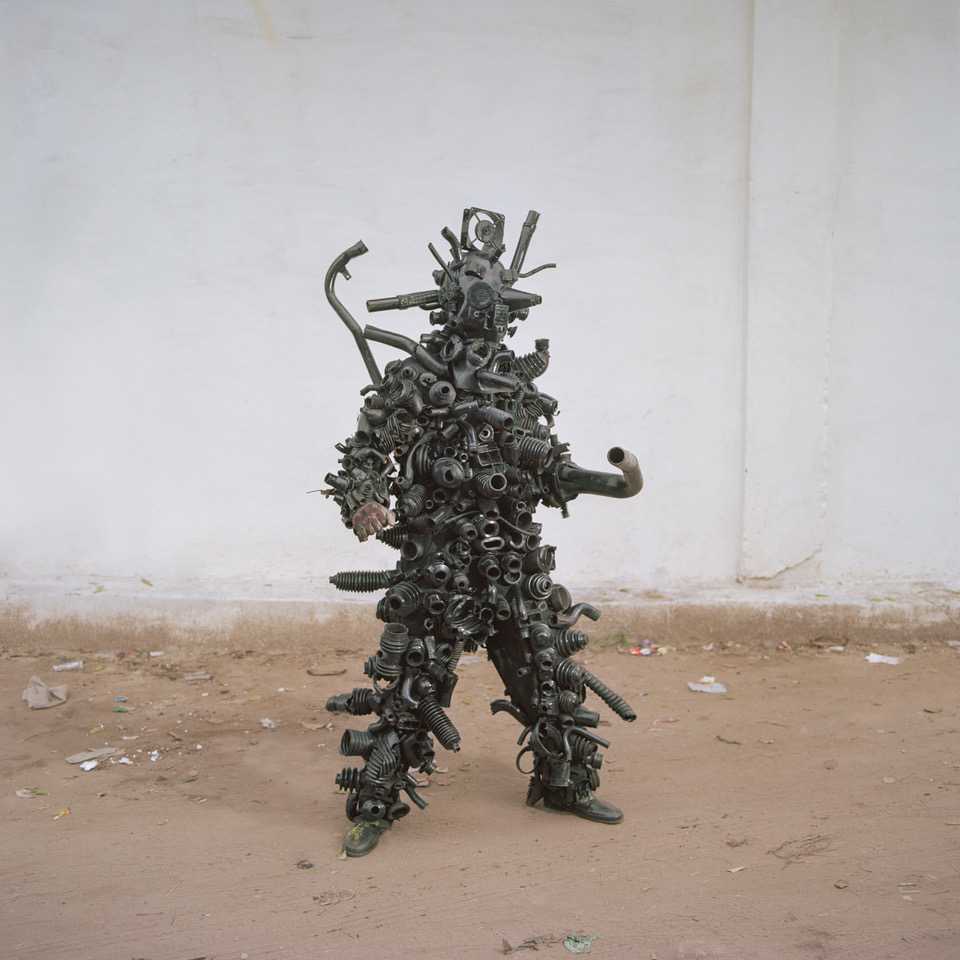 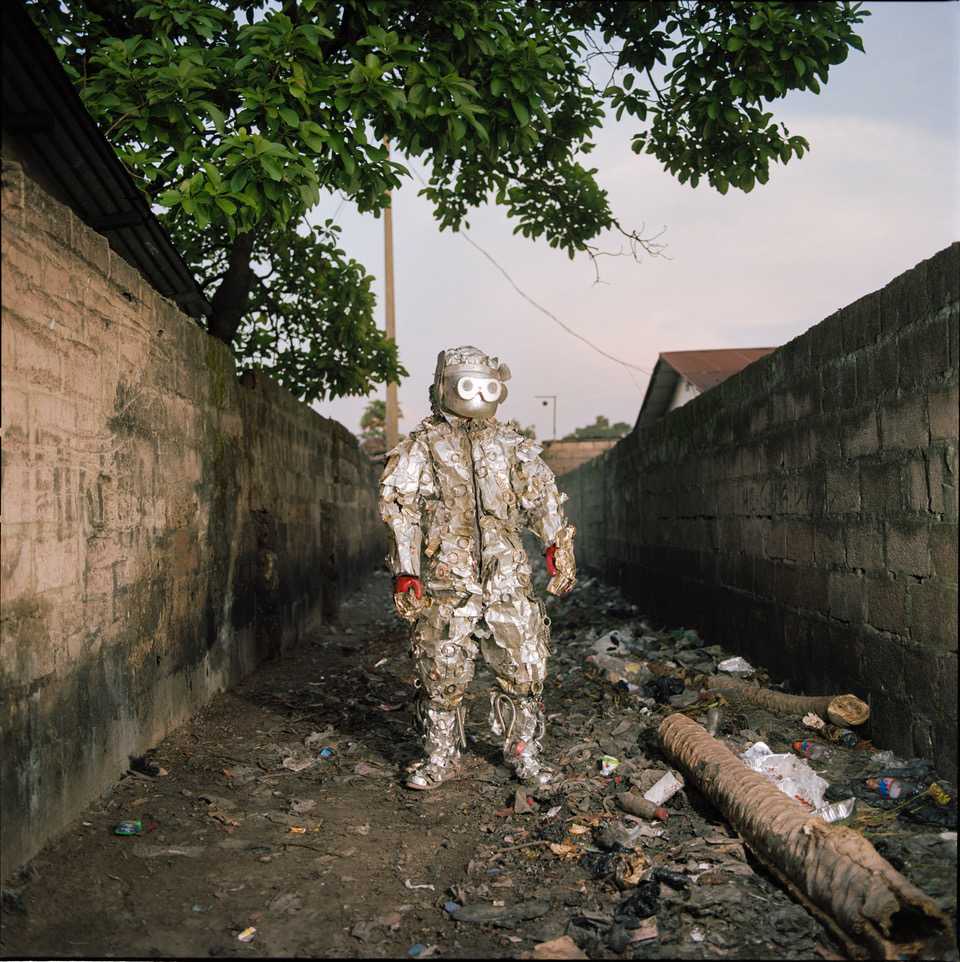 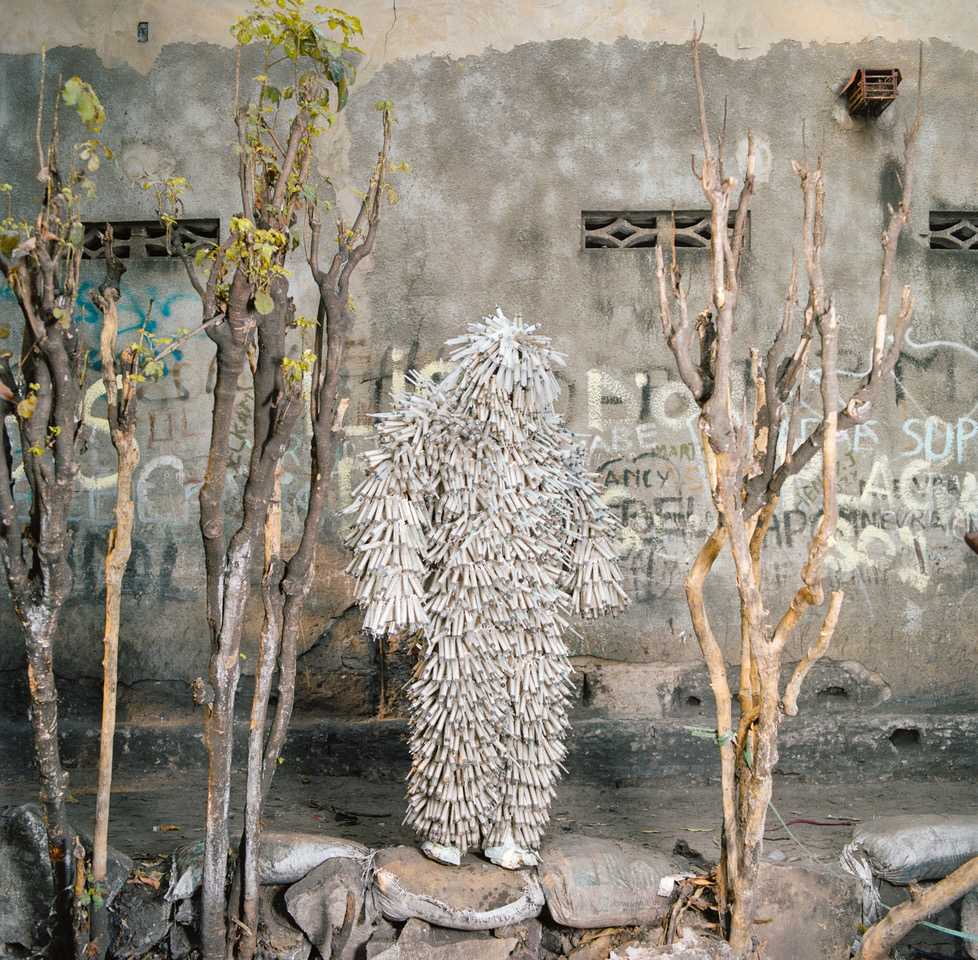 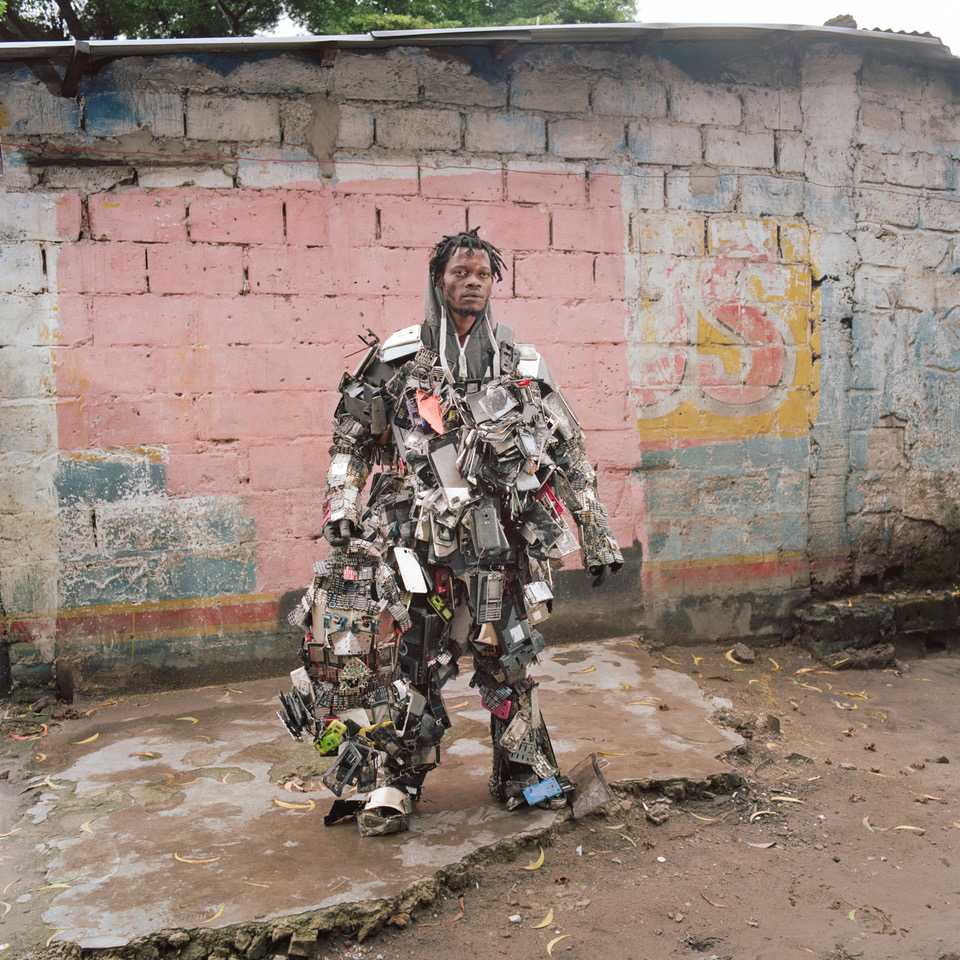 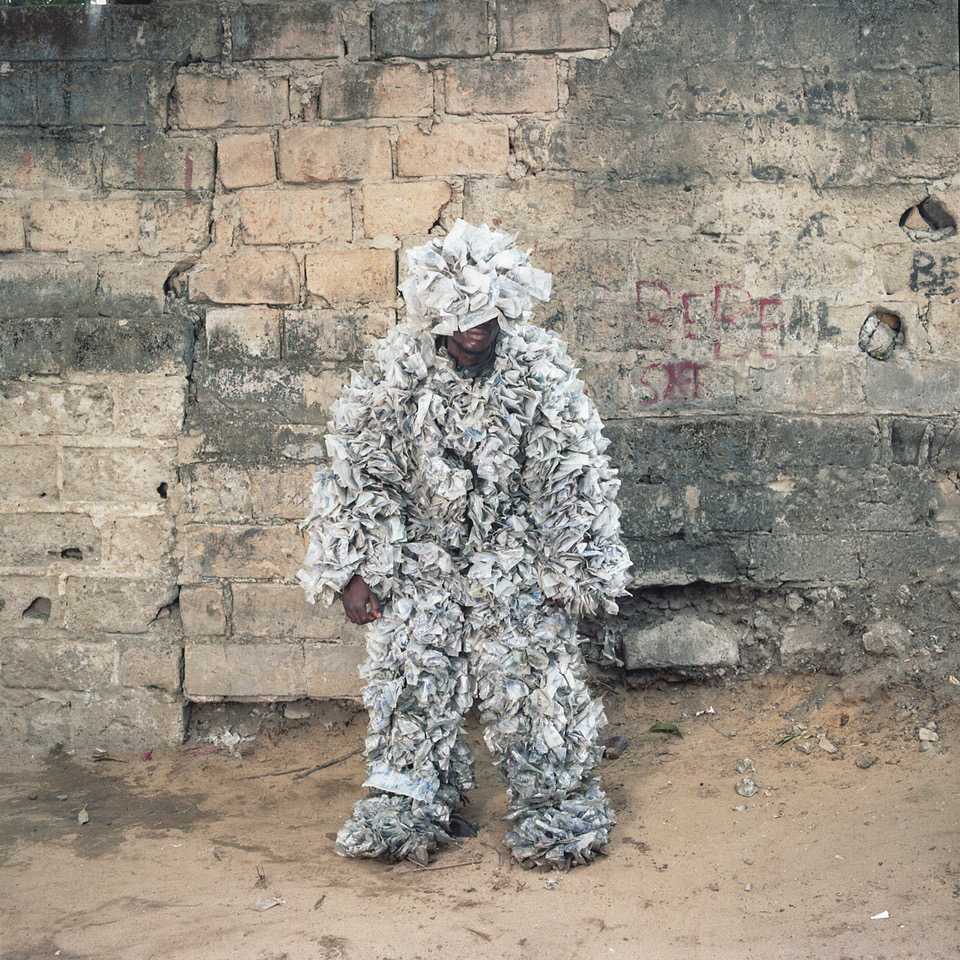 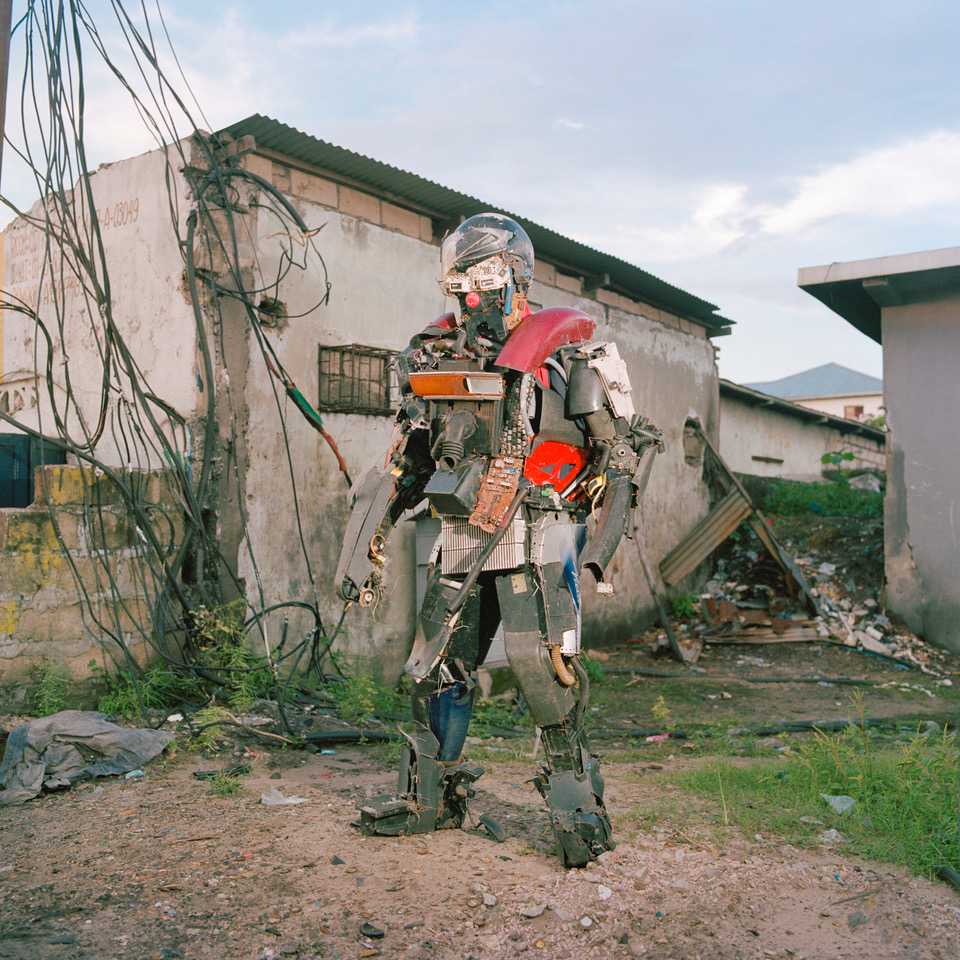 Since the Berlin conference in 1884, Congo has been at the forefront of globalization. The advent of the country as the leading exporter of cobalt (a key ore in the construction of smartphones) is the latest example. In his series ‘Fulu Act’, Colin Delfosse (b. 1981, Belgium) set out to illuminate the ecological and social consequences of the hundreds of thousands of phones — as well as many other everyday objects — that are dumped in the streets of the Congolese capital every year, photographing a community of artist-performers dressed in costumes made out of recycled materials.

To denounce the problems faced by its citizens as a result of the city’s growing needs and consumption patterns — such as lack of access to healthcare and electricity, pollution and deforestation — he photographed individuals from the two performance collectives Ndaku Ya La Vie Est Belle and Farata (whom he met at the Kinact Festival in 2012) in the streets of Kinshasa. Colorful and playful as the images may be, their reality calls for a serious reading. The upright posture and physical presence of the performers becomes sculptural and monumental, making visible the underlying paradox of their appearance and how they came into existence. From syringes, cans, car parts, vacuum cleaners and pharmaceutical packaging, to old laptops and other electronic devices, the mythical-looking characters captured by Delfosse question our modernity and the society we live in, as they re-embody the third most populous city on the African continent.

With the inheritors of an urban culture and an African symbolic tradition, Delfosse produces alternative photographic narratives about this country, ultimately to initiate a dialogue amongst fellow citizens with the intention to try and change behaviour.

The title of the project refers to the term ‘Fulu’, which means waste, rubbish or garbage in Lingala.

Colin Delfosse grew up in Brussels, where he is currently based. Working on long-term personal projects as a freelance photographer, he initiated his first reportages in Mali and the Democratic Republic of Congo, focusing on the mining issues. After graduating in Journalism from IHECS in Brussels, Delfosse turned to documentary photography and became a founding member of the Out of Focus collective, as well as the photo editor of the Belgian investigative magazine Médor. His reportages have been shown in different festivals across Europe, including a screening at Les Rencontres d’Arles and Visa pour l’image, exhibitions at Paris Photo, Circulation(s), Lagos Photo Festival and Photo Festival of Hanover. Over the years, he has won the POYi Award of Excellence, Nikon Press Awards, PDN Photo Annual Awards, Sony World Photography Awards, and has been published in many newspapers and magazines, including The New York Times, Le Monde, L’Internazionale, Jeune Afrique, Polka and Photo Raw.