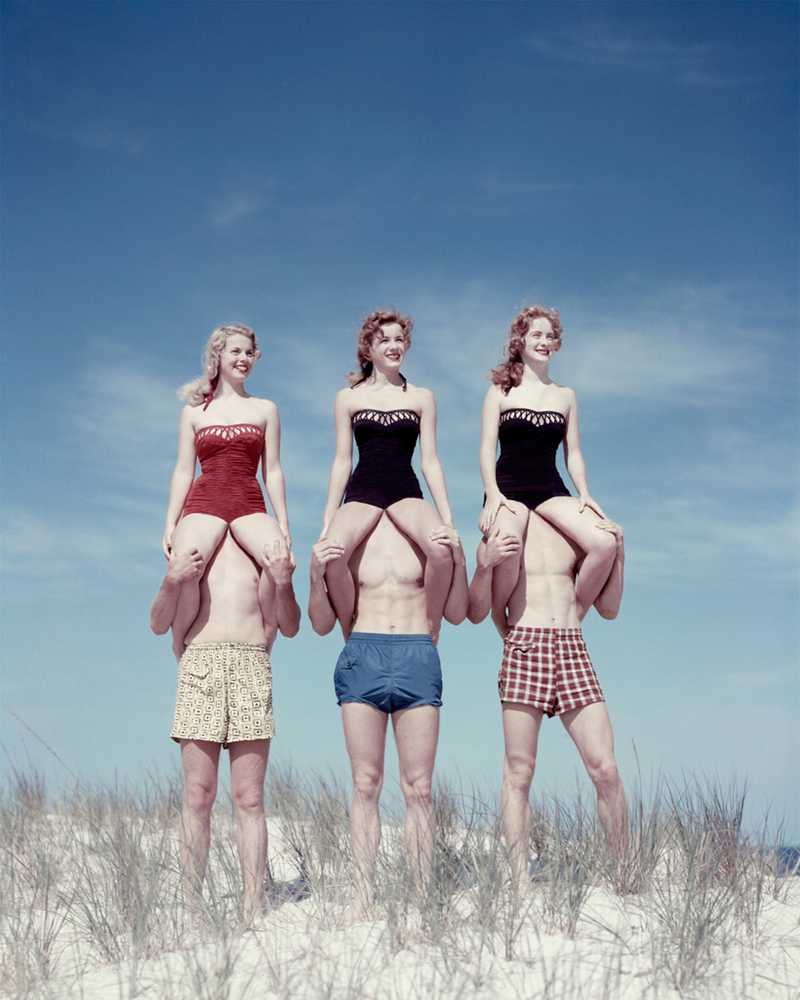 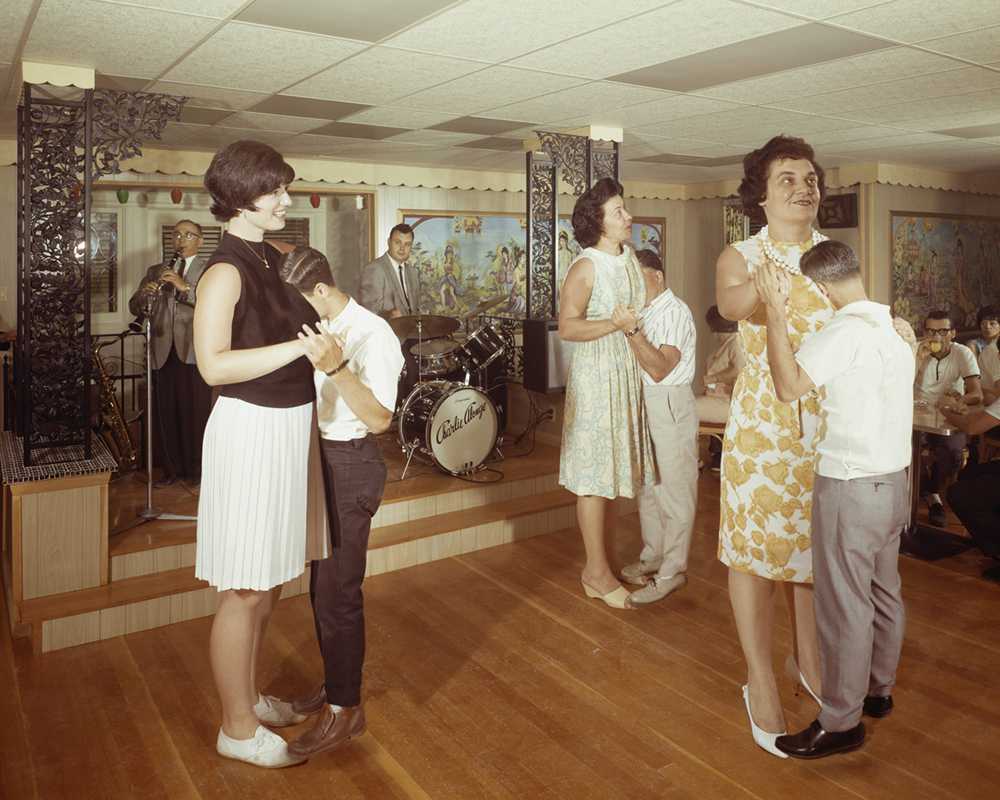 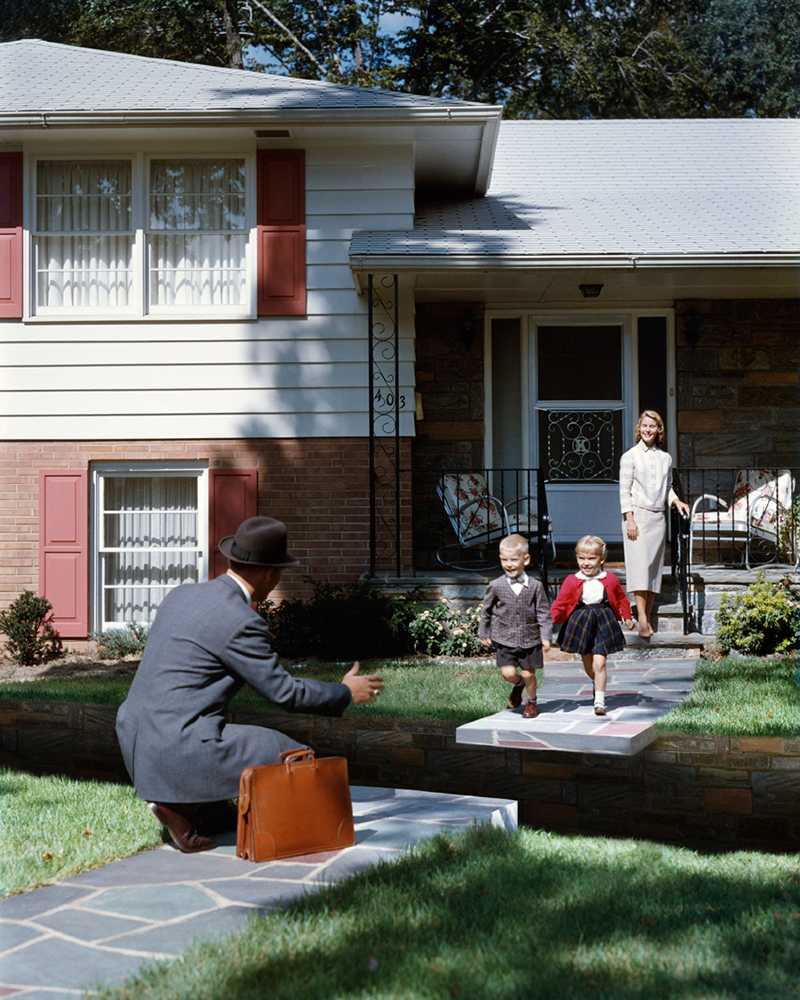 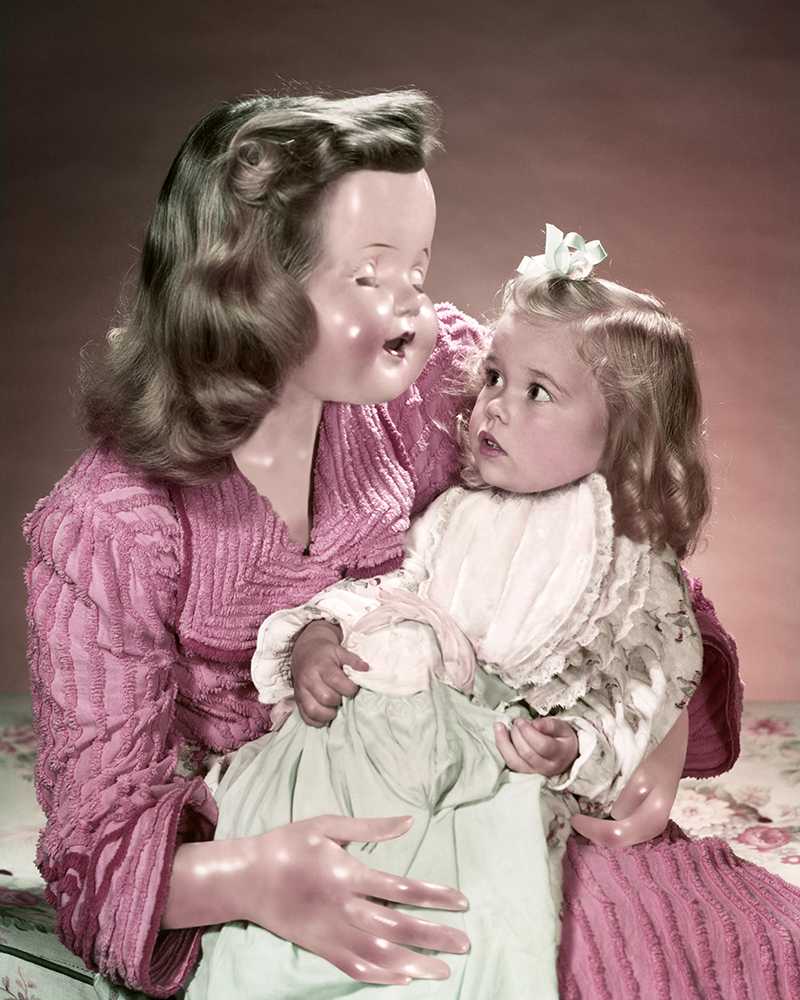 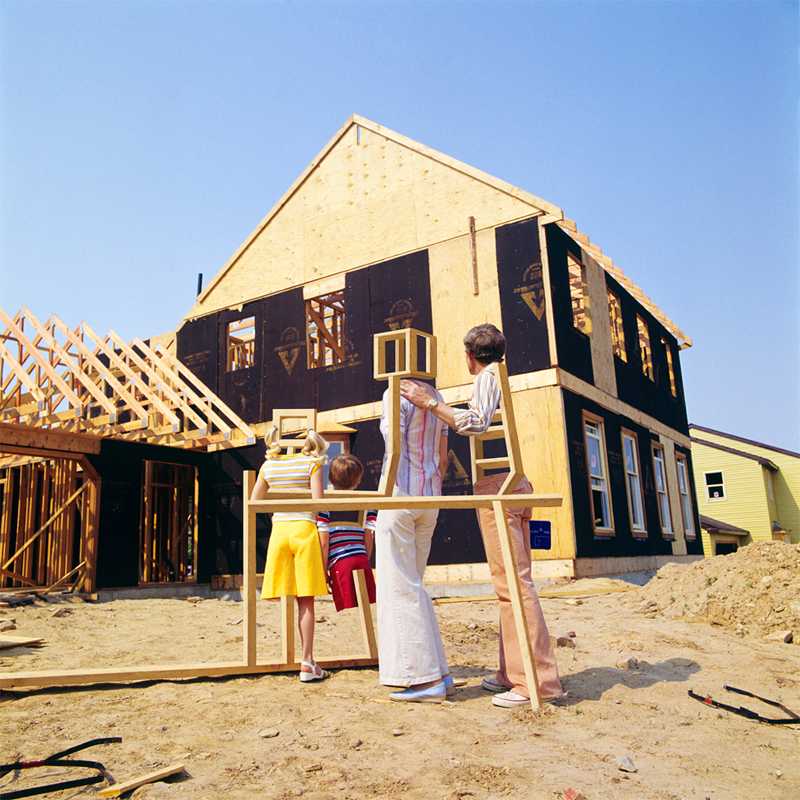 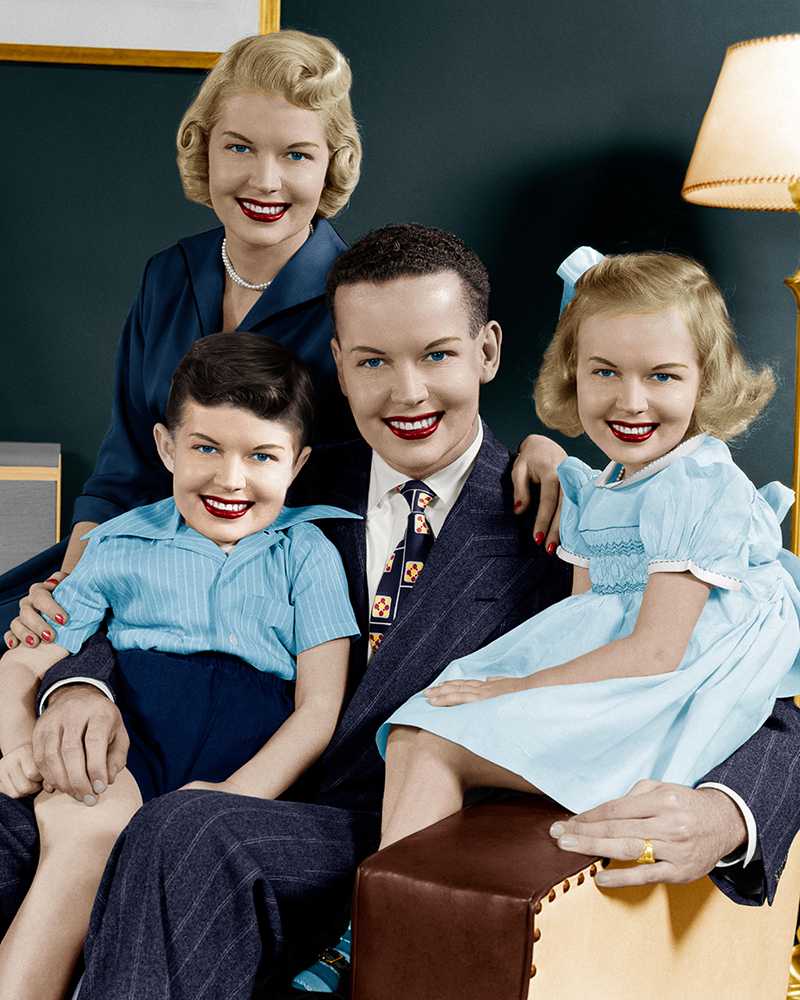 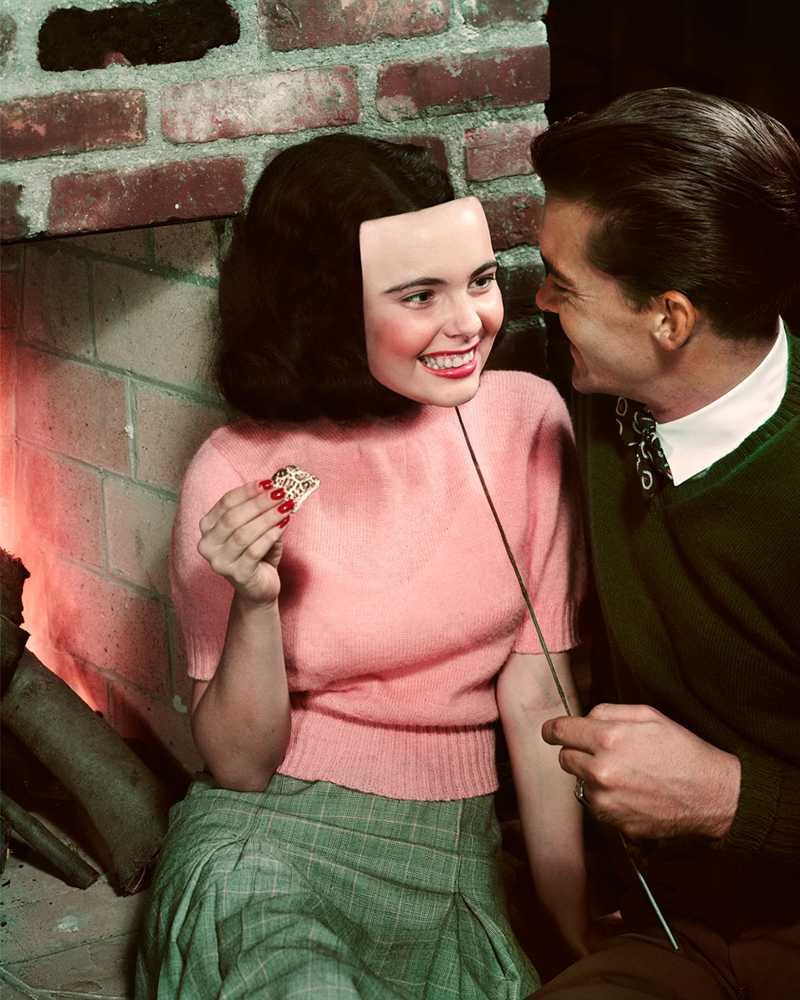 Fascinated by scientific and pseudoscientific theories, Weronika Gęsicka’s (b. 1984, Poland) projects explore mnemonics and various mechanisms concerning human memory and veracity. Fundamental to her practice is archival material, which she sources from the internet: old press photographs and advertisements from image banks and police records.

In her series ‘Traces’, Gęsicka presents playful and lively photomontages created with American stock photographs from the 1950s and 60s. Speculating about the real story behind them, the ambivalent question of whether they originated from actual family albums or had been commissioned for commercial purposes was what initially sparked her interest in the vintage pictures. The latter turned out to be true. 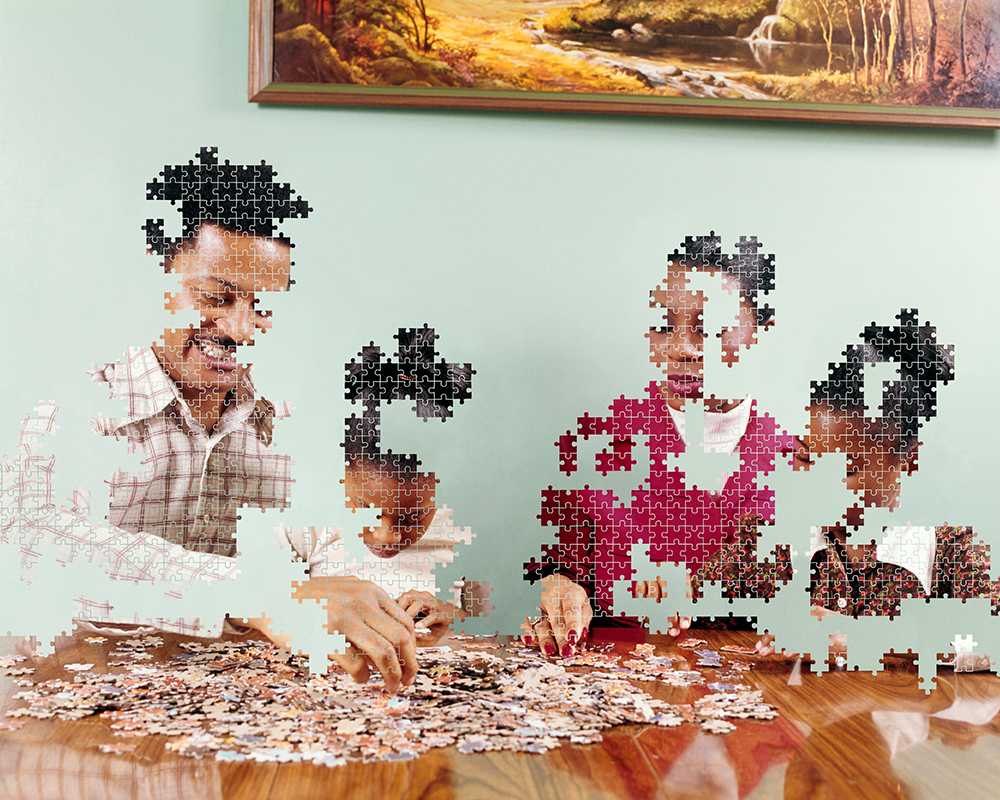 Weronika Gęsicka, Untitled #40 from the Traces series, 2015–2017. Courtesy the artist and Jednostka Gallery

After the fall of the communist regime in Poland, American-made media was welcomed with open arms. Gęsicka grew up with the imported societal model — the liberal attitude and luxury lifestyles as shown in films and television series. Using Photoshop to digitally alter the staged, domestic scenes of smiling families with suburban homes and well-tended gardens, holiday memories and long-lost souvenirs, she fractures the ideal image of the American Dream.

“Traces are, by definition, marks or other indications of the existence or passing of something. Evidence of a presence. Confirmation of participation. Photographs are such traces, documenting the existence of people, situations, moments. They are like engrams that come about through certain stimuli and experiences.” 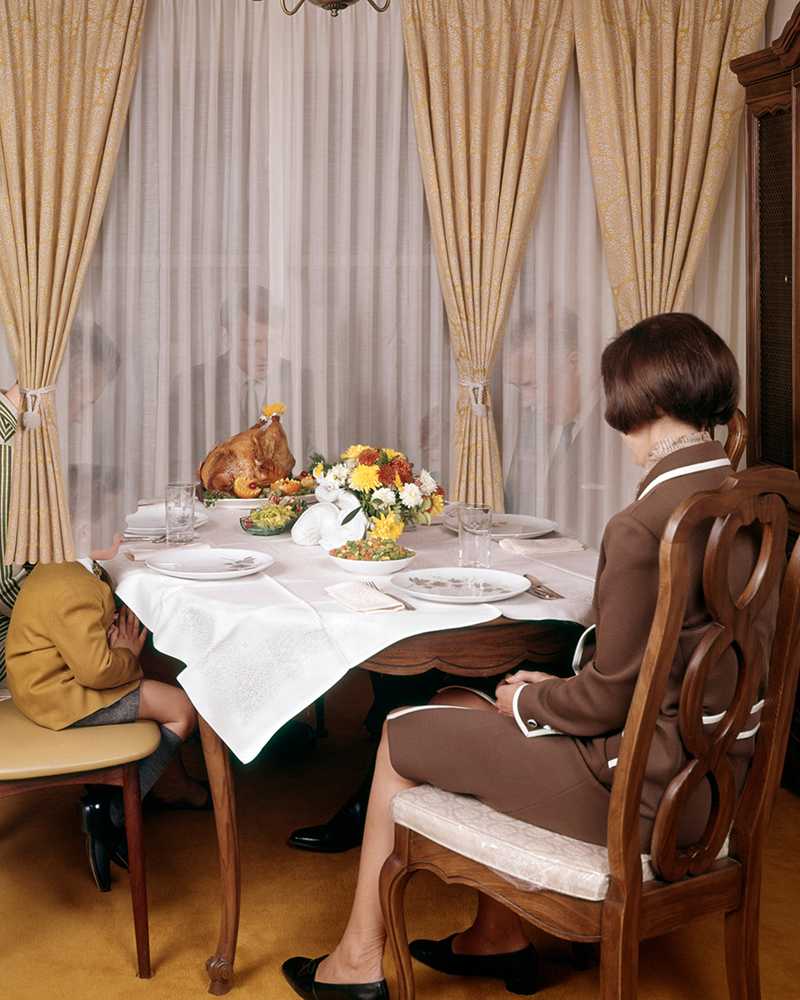 Weronika Gęsicka, Untitled #18 from the Traces series, 2015–2017. Courtesy the artist and Jednostka Gallery

Traveling through blissful moments of the post-war economic boom, we delve into Gęsicka’s constructed universe — an imaginary rendering of this bygone era. In each photo, she finds an element that serves as the base for creating an alternative narrative. Wrapped up in a new context, the modified images exist somewhere between reality and fiction, authenticity and artifice. Subjects become one with the interior, their bodies partially disappearing behind the walls and blending in with the furniture. Nearly vanished, they appear to be replaced by something straight out of a catalogue or glossy magazine.

As witty and idyllic they may seem, Gęsicka’s deceptive works are a commentary on fundamental matters such as identity, introspection, imperfection and relationships, such as the internal dynamics of family life. In ‘Traces’ she explores the broader context of social memory and the memory of an individual, looking at how our perception of the world changes over the years and why we remember certain relationships and situations very well, while others become gradually blurred. 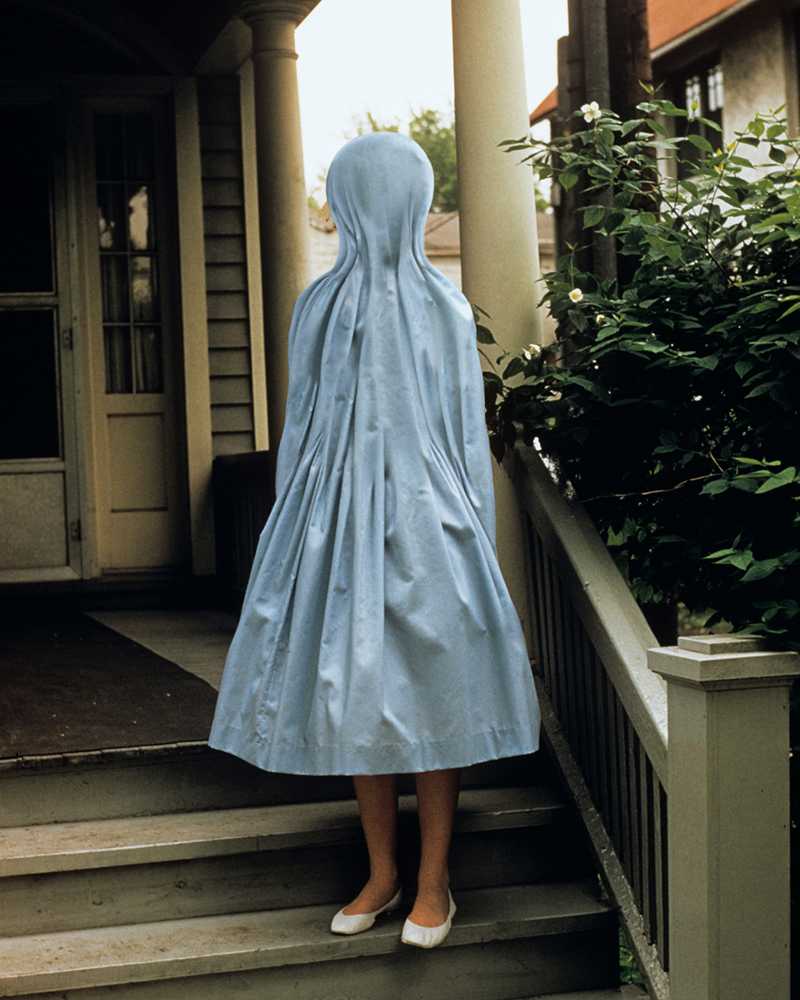 Weronika Gęsicka, Untitled #4 from the Traces series, 2015–2017. Courtesy the artist and Jednostka Gallery

Weronika Gęsicka graduated from the graphics department of the Academy of Fine Arts and the Academy of Photography in Warsaw. She mainly works within the field of photography, but also creates artefacts, often in collaboration with craftsmen and occasionally with other artists. Her work is part of several collections including the Deutsche Börse Photography Foundation. In 2017 she was announced as a Foam Talent winner and published the book ‘Traces’ with Jednostka and M. Sokalska.