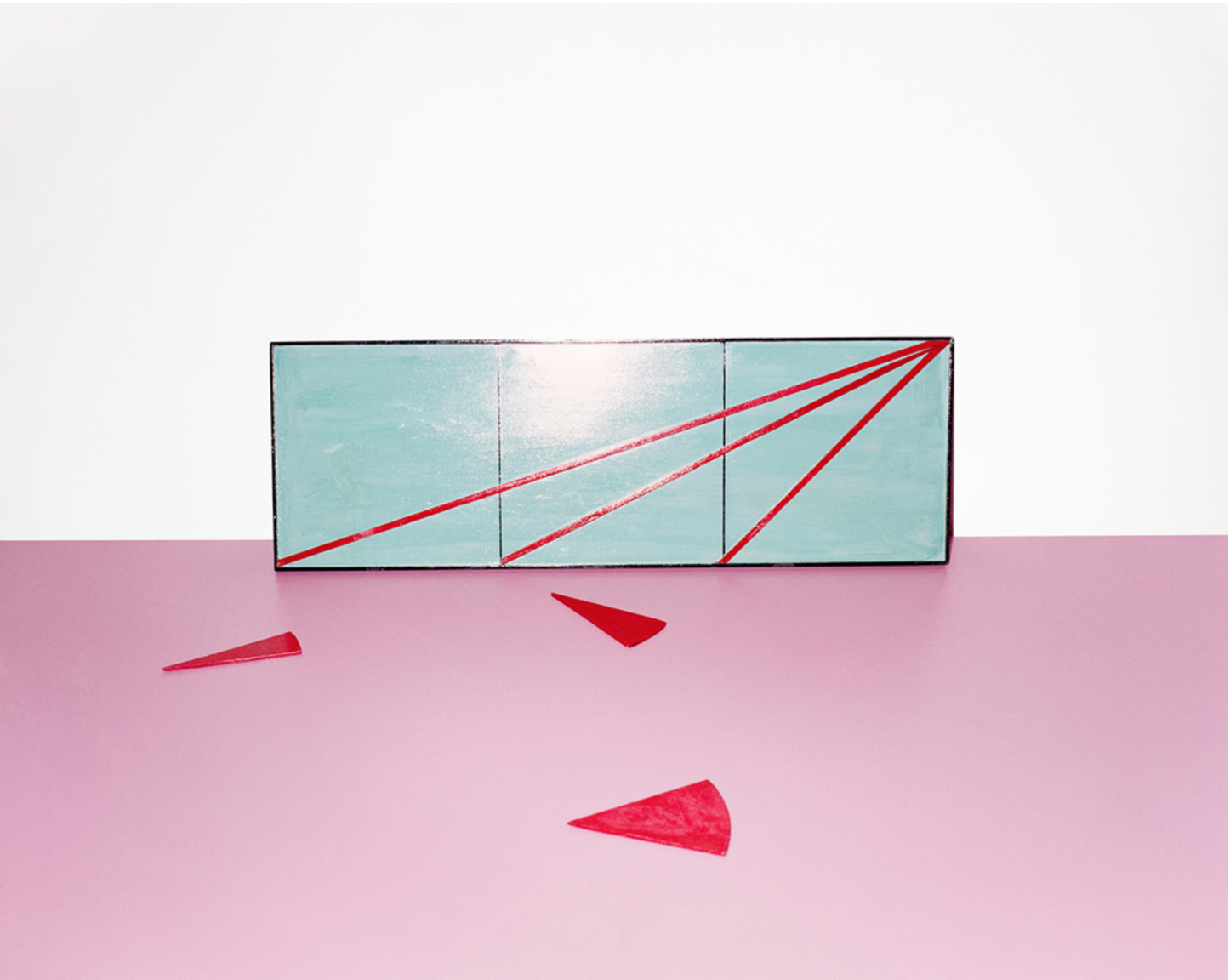 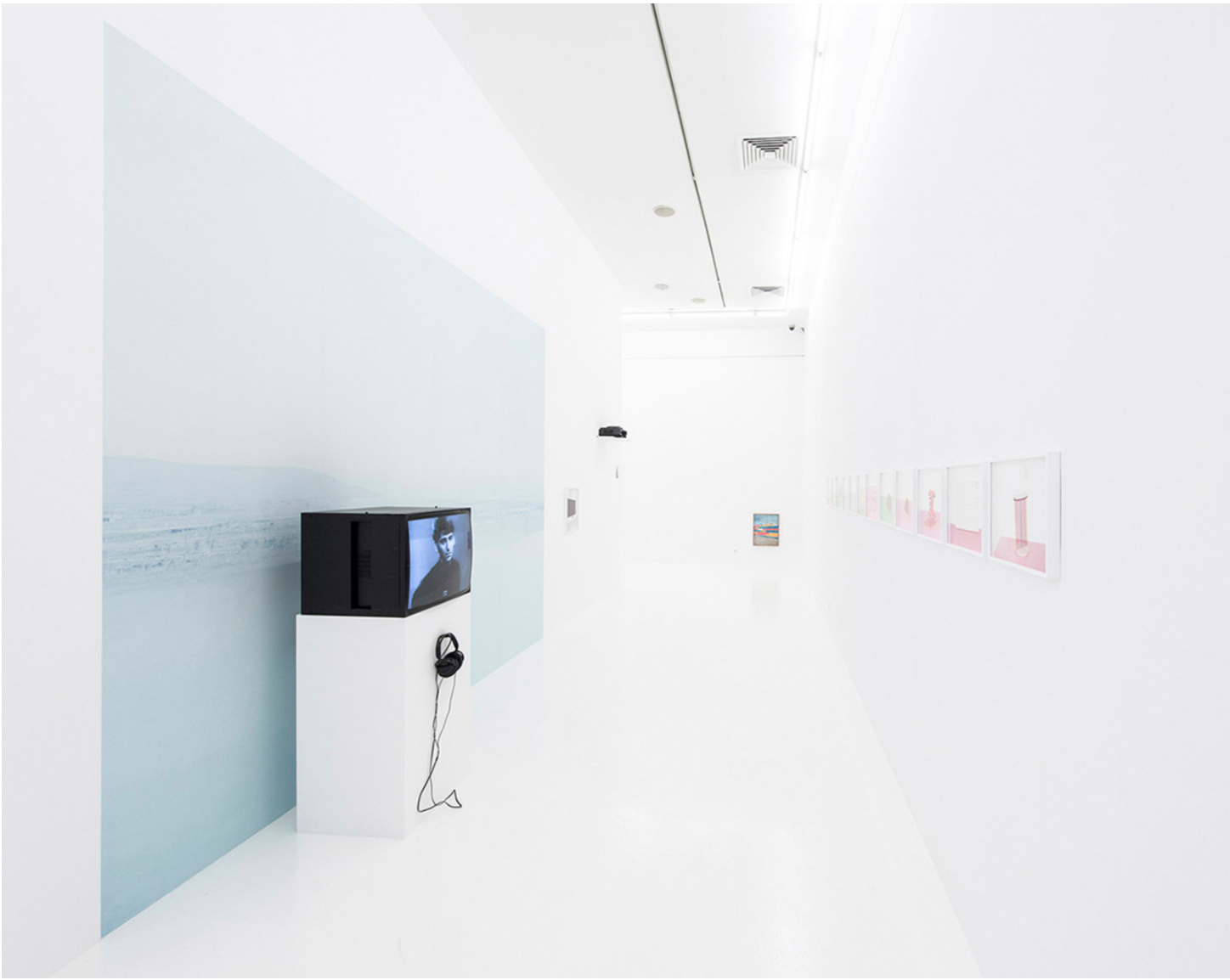 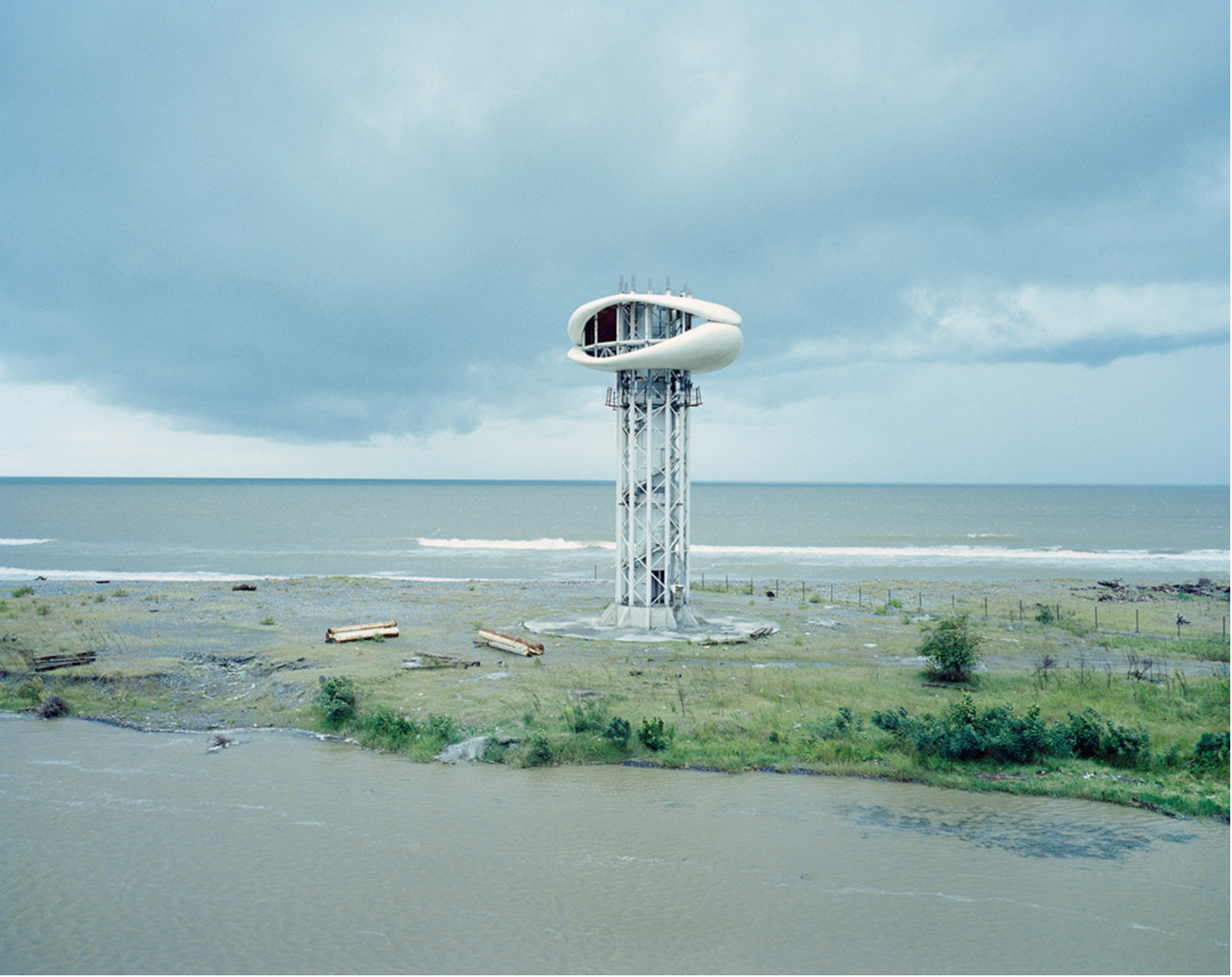 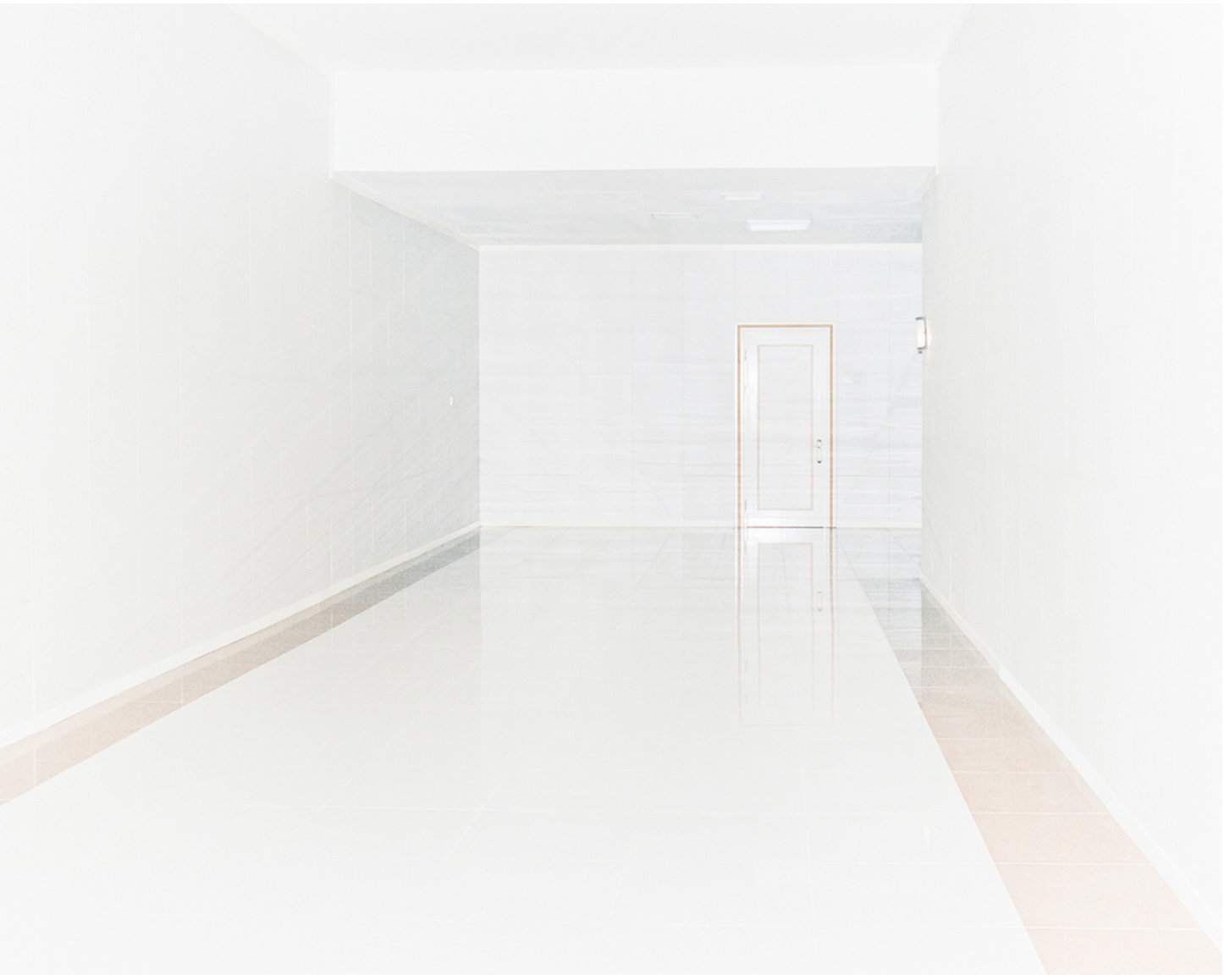 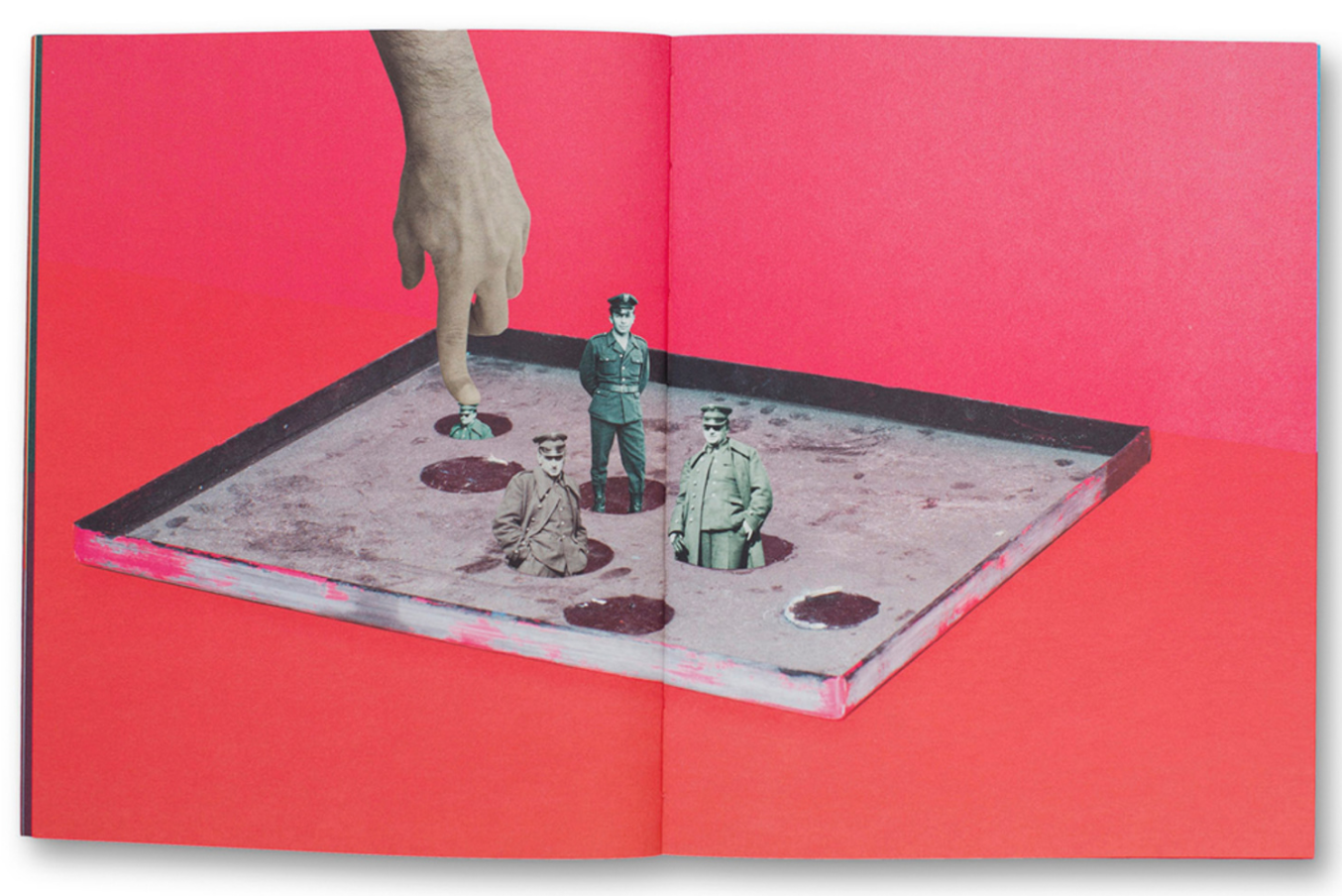 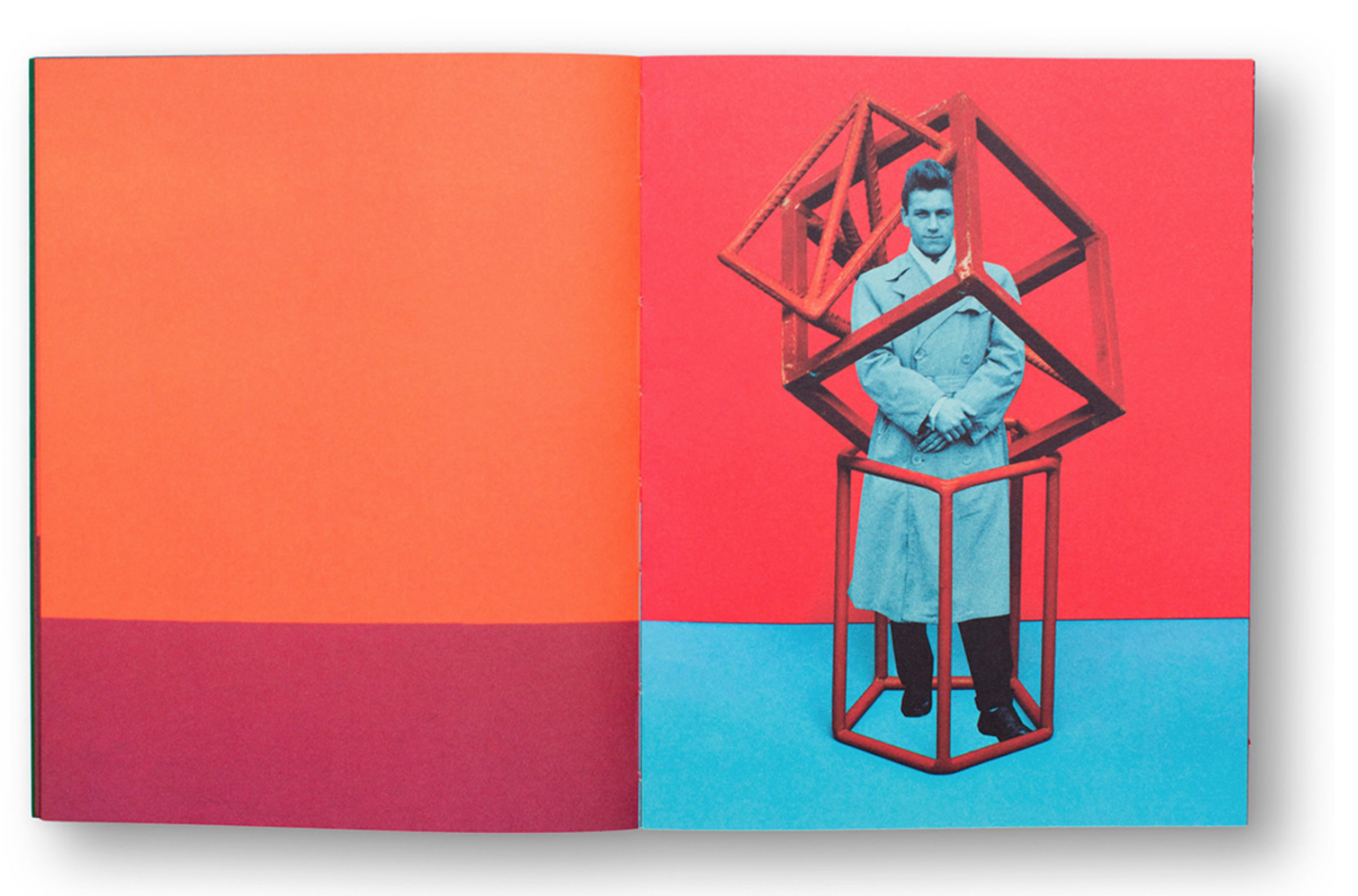 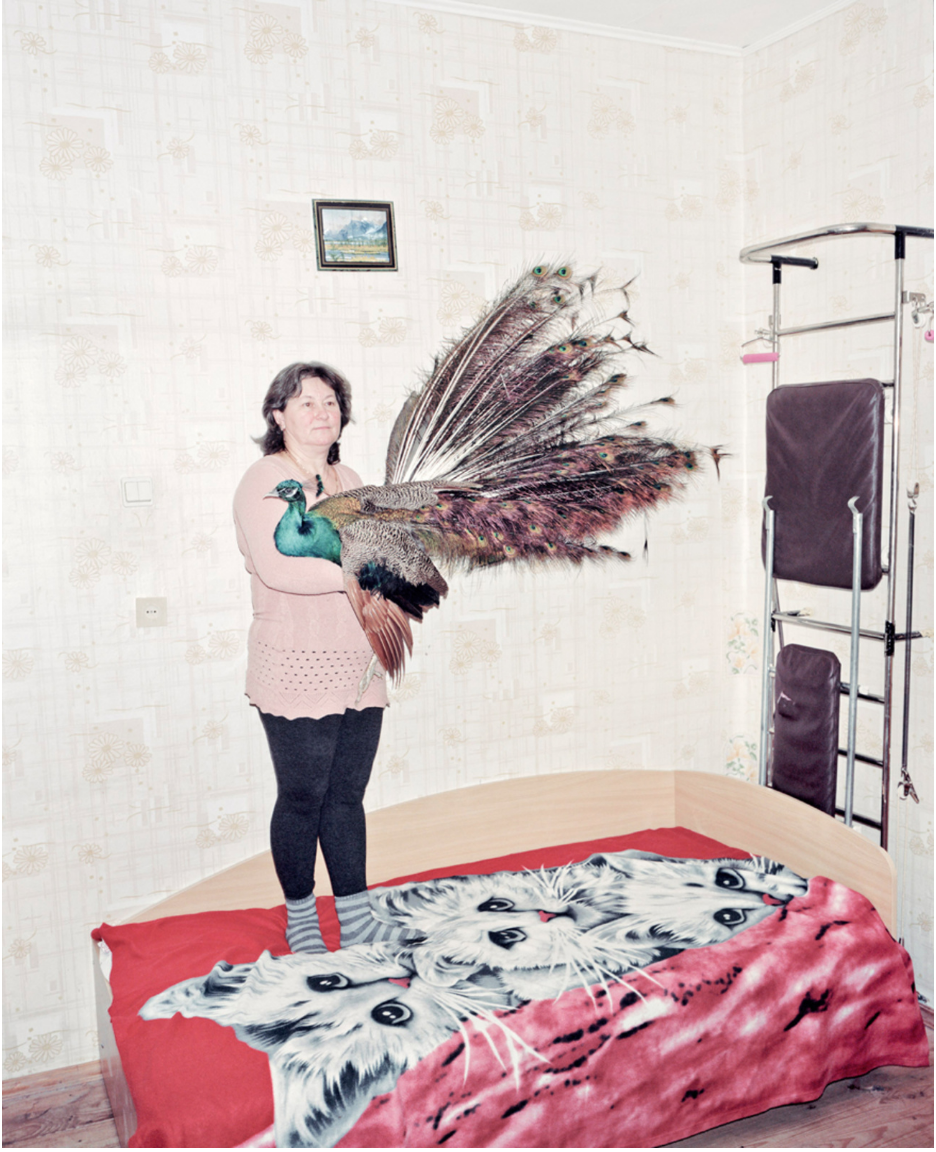 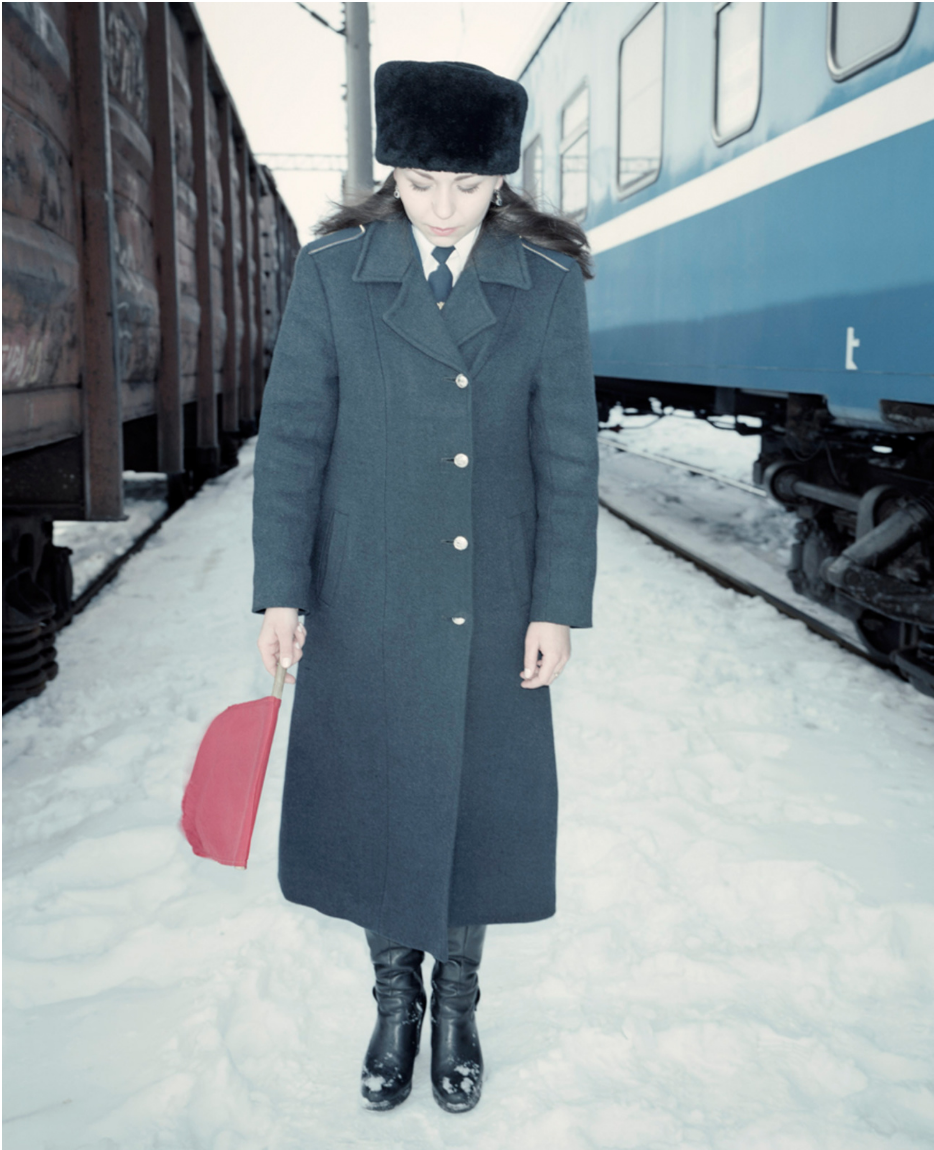 In the last decade or so, we have witnessed the rise of a strong generation of Polish photographers. Rafal Milach (1978) is probably one of the best known among them. He is co-founder of the collective Sputnik, and has been working on long-term projects concerning former Soviet and European post-communist states. He is active on many different levels: as a photographer, visual artist, graphic designer, curator, mentor. You name it. But Rafal himself will meanwhile refuse to be labelled, just as he avoids the pitfall of conventions. Erik Vroons (our editor-at-large) had a conversation with him, and they touched on issues of politics, appropriation of propaganda techniques, the act of curating for different platforms, and the overall function of visual art in contemporary Poland.

The First March of Gentlemen, one of your latest projects published in 2017 with GOST (UK), consists of very colourful, collaged images. It seems a step away from being a ‘traditional’ documentary photographer. How to understand this more conceptual approach?

The book you refer to is a fictitious narrative composed from archival material that I discovered in Września, a town in Poland that offered me a residency. The images themselves relate to the postwar communist era but the problems which the project touches on are universal, and may be seen as a metaphor for the contemporary social tensions in my country. As you may know, our government – led, since its autumn 2015 election victory, by the right-wing Law and Justice (PiS) party – is pulling itself to the periphery of the European Union by challenging our constitution.

Lately, many documentary photographers apply a stronger, conceptual guidance regarding the socio-political issues that they address. Why do you think this is happening?

First of all, I can only speak for myself and don’t really see how my work is being part of a trend or movement. I’ve never considered myself a photojournalist and I’m actually not that concerned about being labelled as either a ‘documentary photographer’, ‘artist’, or whatever. For me, it is just a question of finding the visual language that best fits the story I want to tell. I don’t want to get pinpointed to one strategy, it just needs to be relevant for the content I’m dealing with.

The things that keep me occupied actually arrive from a time even before I started to get professionally involved with photography. I started my career as a graphic designer and this is slowly but steadily coming back to me. So when images need to function in a more metaphorical way, less straightforward, this background helps me in the communication of what I intend to get across.

“It’s just a question of finding the visual language that best fits the story I want to tell.” 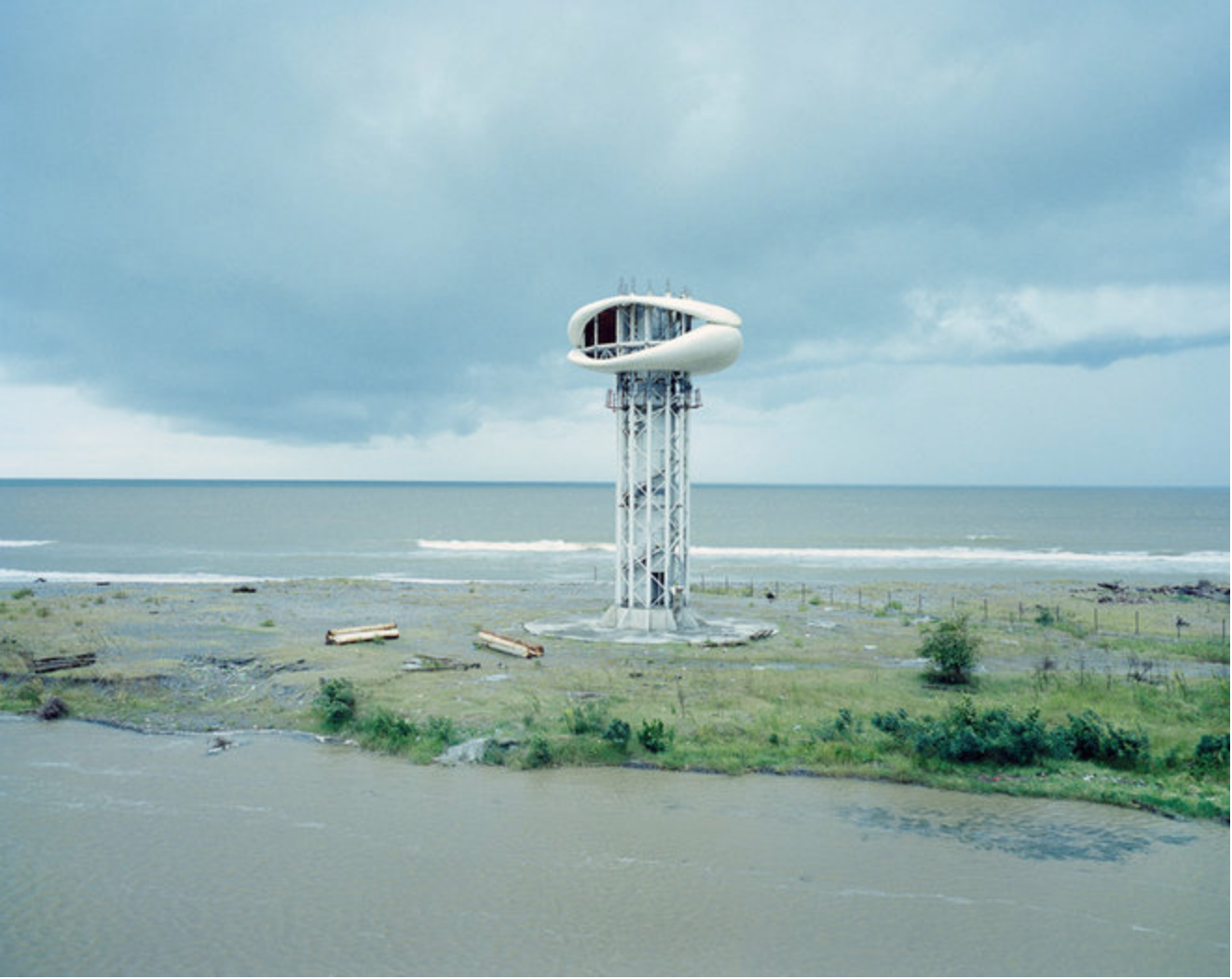 You are shortlisted for the prestigious Deutsche Borse Prize 2018. This nomination relates to a specific exhibition you curated earlier this year: Refusal. Can you tell something about that?

Well, yes. This was in the Atlas Gallery in Lodz. You were actually there! Afterwards, it was also exhibited in Katowice, but ‘Refusal’ was specifically designed for this gallery in Lodz. Its elements are distilled from my personal archive, from various projects that I’ve been working on in the last few years. One section of the gallery was set up as an eclectic ‘mirror’ of spaces that I’ve visited over the years. Overall, it breathes the complex power relations of the various post-Soviet states. In the other room I showed the complete set of images on winners of various state and local competitions, as supported by the Belorussian authorities. These portraits were initially not meant to be exhibited but, I figured, it somehow fits the theme of ‘Refusal’. Now, for the Photographers’ Gallery, I will include ‘The Winners’ too, be it as a book (published by GOST in 2014) and not as prints.

‘Refusal’ will be exhibited at the Photographers’ Gallery (London) in a new form but will it also be published as a book?

I’m constantly having in mind if and how I could translate the concept of this exhibition to a paper version, but a book is just a very different space, potentially. It worked so well as an exhibition, I think, because the gallery itself allowed me to appropriate the essence of manipulation, to ‘mirror’ how power is effectively displayed by the leadership of ex-Soviet states. I mean, be it in Azerbaijan, Belarus or Georgia, you can just feel it when you enter a museum there. Power is omnipresent and integrated in the local architecture. With ‘Refusal’, I aimed to confront the audience with that complex and somewhat abstract atmosphere.

To what extent do you wish to control the message that you try to communicate?

Ah, this is a very tricky thing. My projects need guidance, I’m aware of that responsibility and I’m also willing to give context where I see it needed. Before going public, I always test my presentations out on others. Not only by showing it to so called ‘visual literate’ friends but also to my parents, for instance. I think that I can only do my part, by making a good edit and by way of letting the material interrelate – by design and combining visual elements with text, be it for an exhibition or a book – and then I guess I expect from the viewer to also make an effort to understand my intentions. I wish my work to be widely accessible, be it that I expect some investigation or just plane curiosity from the other end too.

Considering the current political situation in Poland, I also feel the responsibility to not just lean back and with my work, I hope to stimulate others to also stay wide awake. It is the only way for us, the people, to anticipate such a crisis. Visual art can play a role in that process. It is a less direct form of demonstration. It is the kind of activism that I feel comfortable with, including the fact that I can’t completely control how it is being received. Most recently, for example, a right-wing newspaper wrote an announcement of the ‘Refusal’ show in Katowice. I’m not sure if they realized what the content is about exactly, but that already proves to me that my work can somehow negotiate with the power structures it addresses! To me, that is a very interesting aspect of my role as a visual artist.

“I wish my work to be widely accessible, be it that I expect some investigation or just plane curiosity from the other end too.” 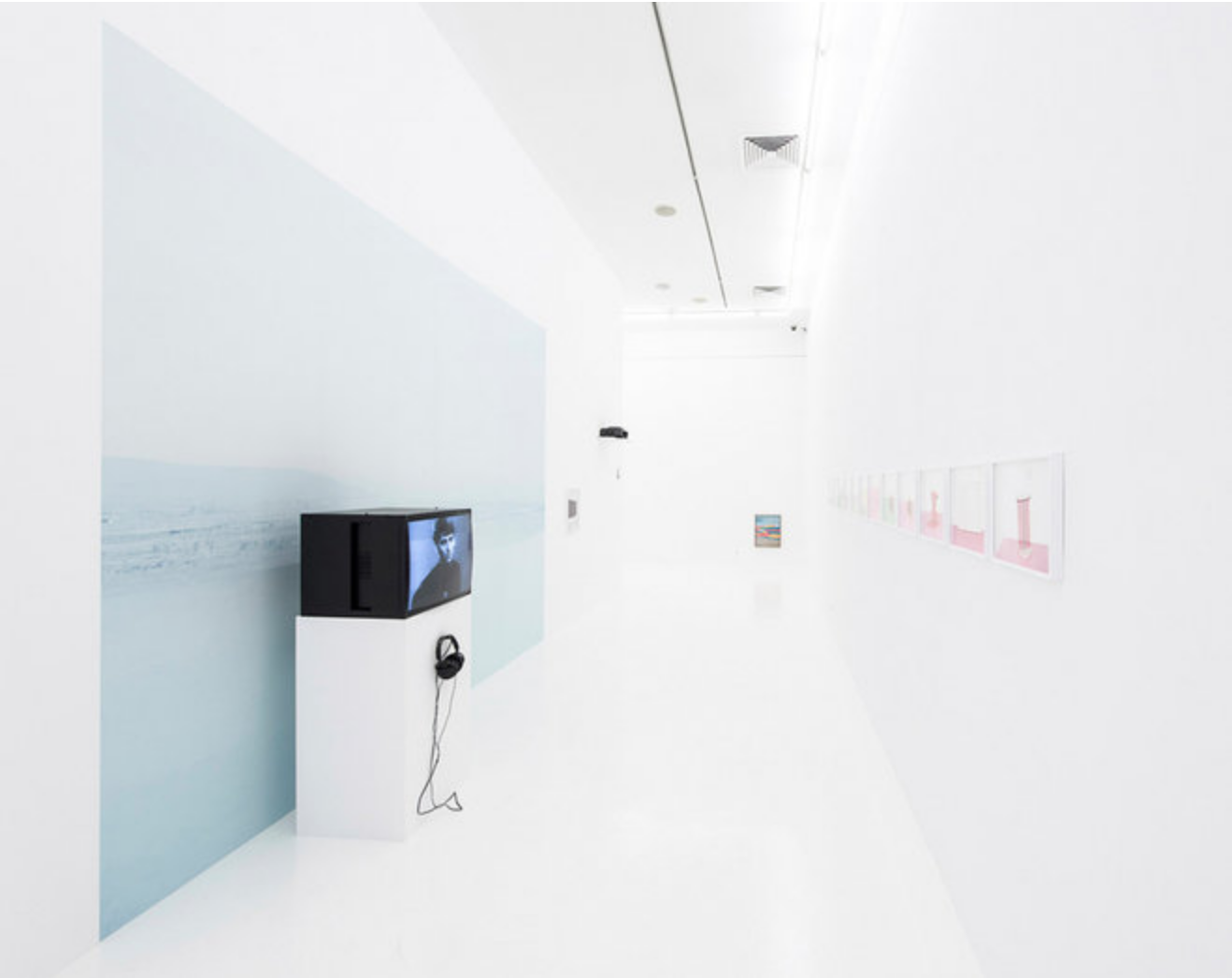 The winner of the Deutsche Börse Prize will be announced in May, but the related exhibition in the Photographers’ Gallery (London) already opens in February. I just finished the proposal for that and it was quite a puzzle as I can’t show ‘Refusal’ in the exact same way as I did in Lodz. On the other hand, that is also the kind of challenge I’m always looking for. The projects I’m involved with – be it personal or in joint venture with the Sputnik collective – are always dynamic and ongoing. For ‘Lost Territories’, the overarching project on the post-soviet countries that Sputnik has been focused on for a good while now, we always try to adjust the set to the specific occasion and location in which it is being presented, and we’ll continue to do so in the coming year.

With Sputnik, we also recently launched a magazine, STRONY, which in Polish has a double meaning. It translates both as ‘pages’ or as ‘sides’, which can mean so much as ‘taking position’. All content is gathered around specific contemporary problems, such as ‘pollution’, ‘immigration’ and ‘post-truth’, among others. We collaborated with experts from all kind of disciplines – critical writers, historians, philosophers. As a collective, we’ll continue to address these social issues but this doesn’t necessarily means sticking with the form of a print magazine. It could also find its way to the public space in another format but, as always, all depends on finding the means to execute our ideas. Fingers crossed!

The four artists shortlisted for the 21st edition of the Deutsche Börse Photography Foundation Prize are Mathieu Asselin, Rafal Milach, Batia Suter and Luke Willis Thompson. The winner will be announced at a special award ceremony in May 2018 at The Photographers’ Gallery in London.

Works by the shortlisted photographers will be exhibited at The Photographers’ Gallery London from 23 February until 3 June 2018 and subsequently tour to the MMK Museum für Moderne Kunst Frankfurt am Main as part of the triennial RAY Fotografieprojekte Frankfurt/Rhein Main 2018.