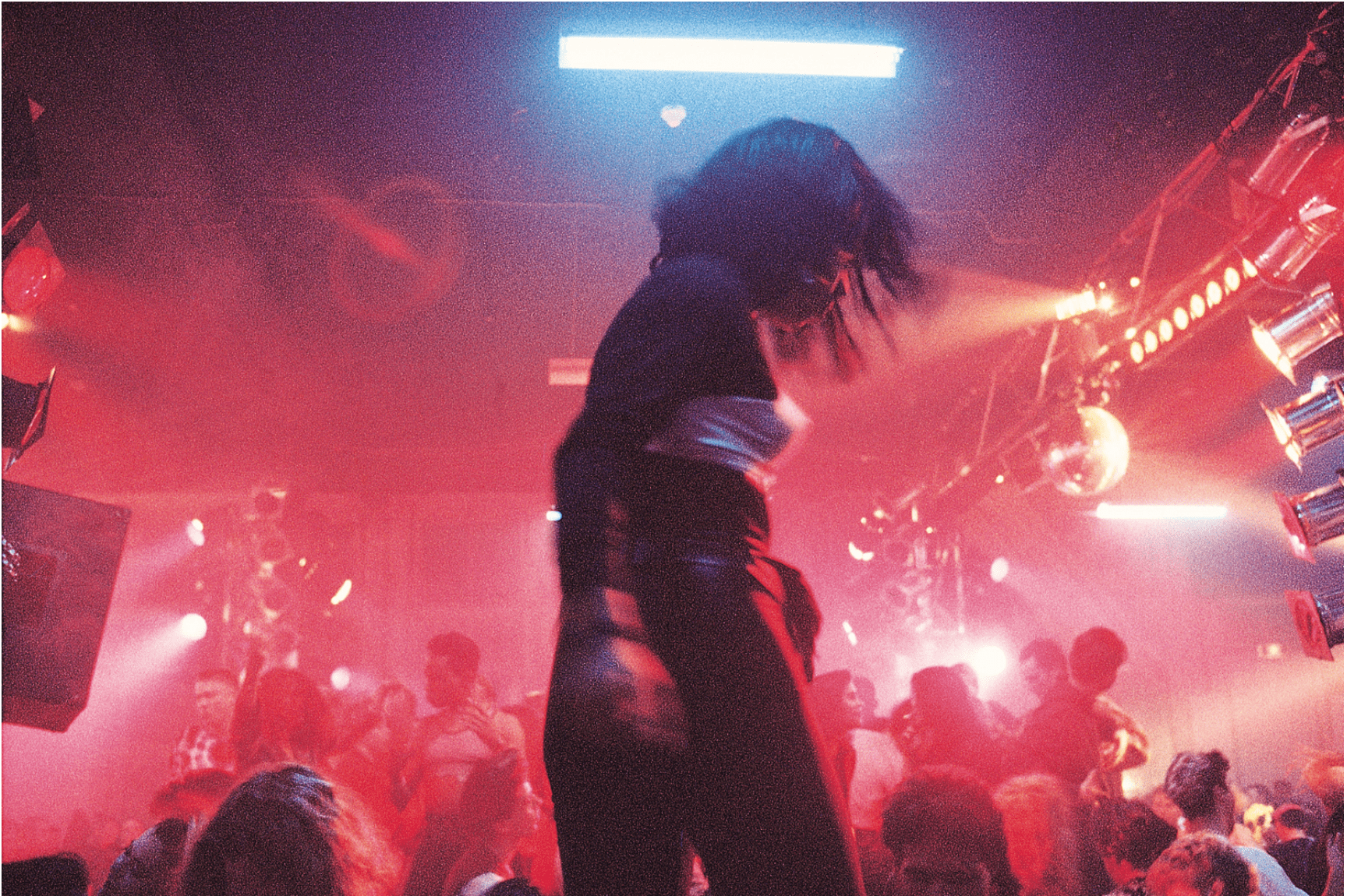 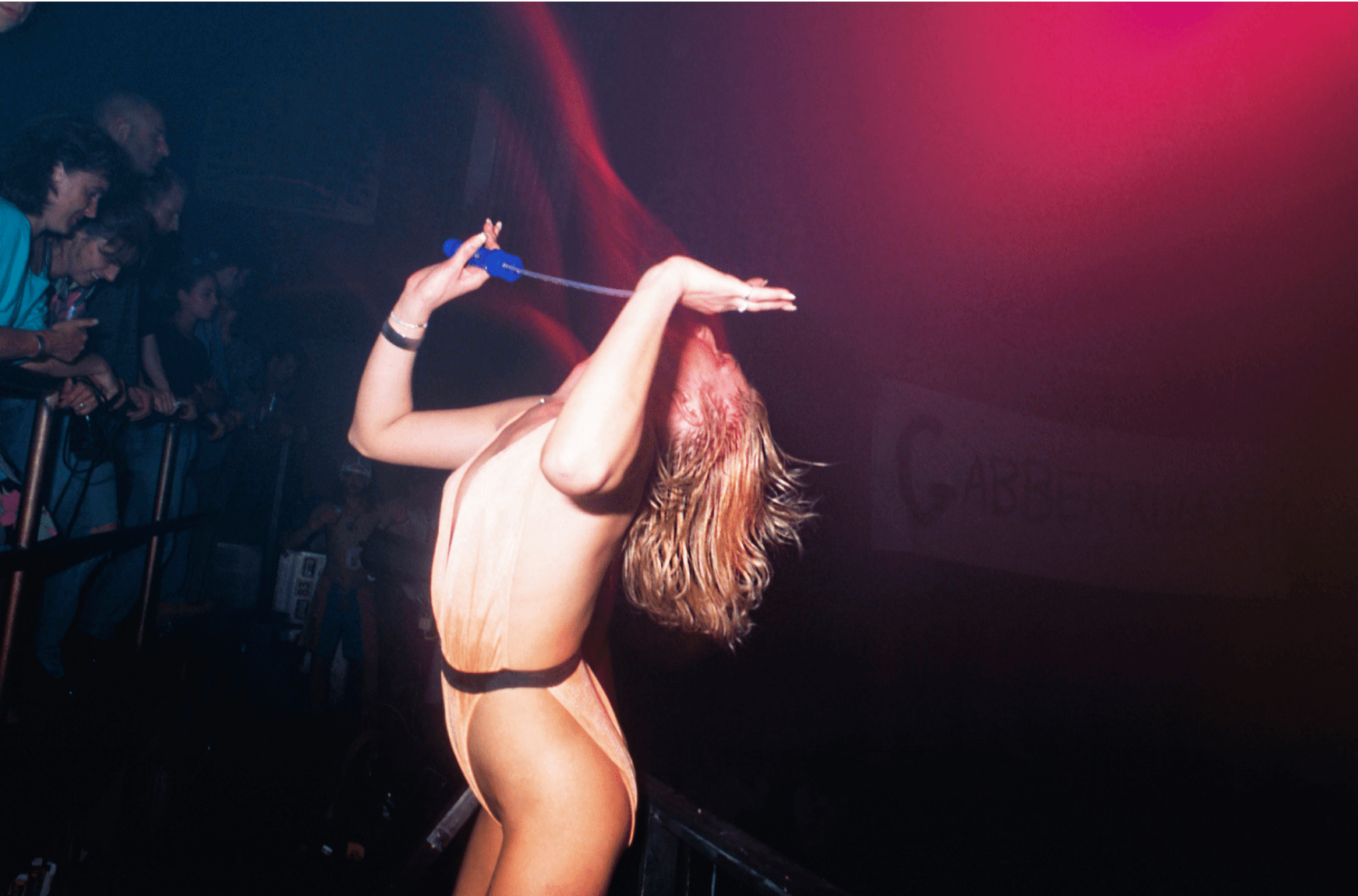 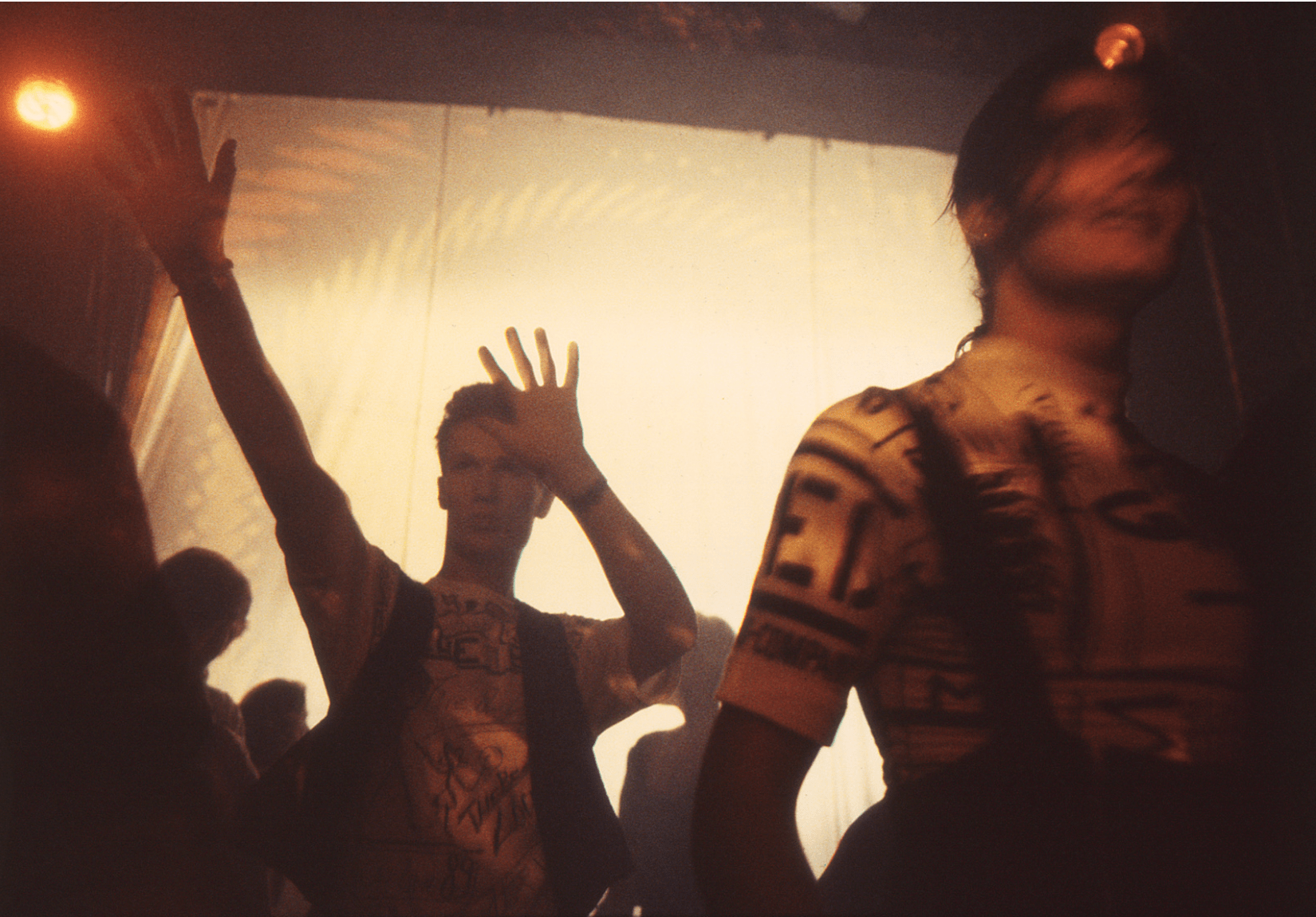 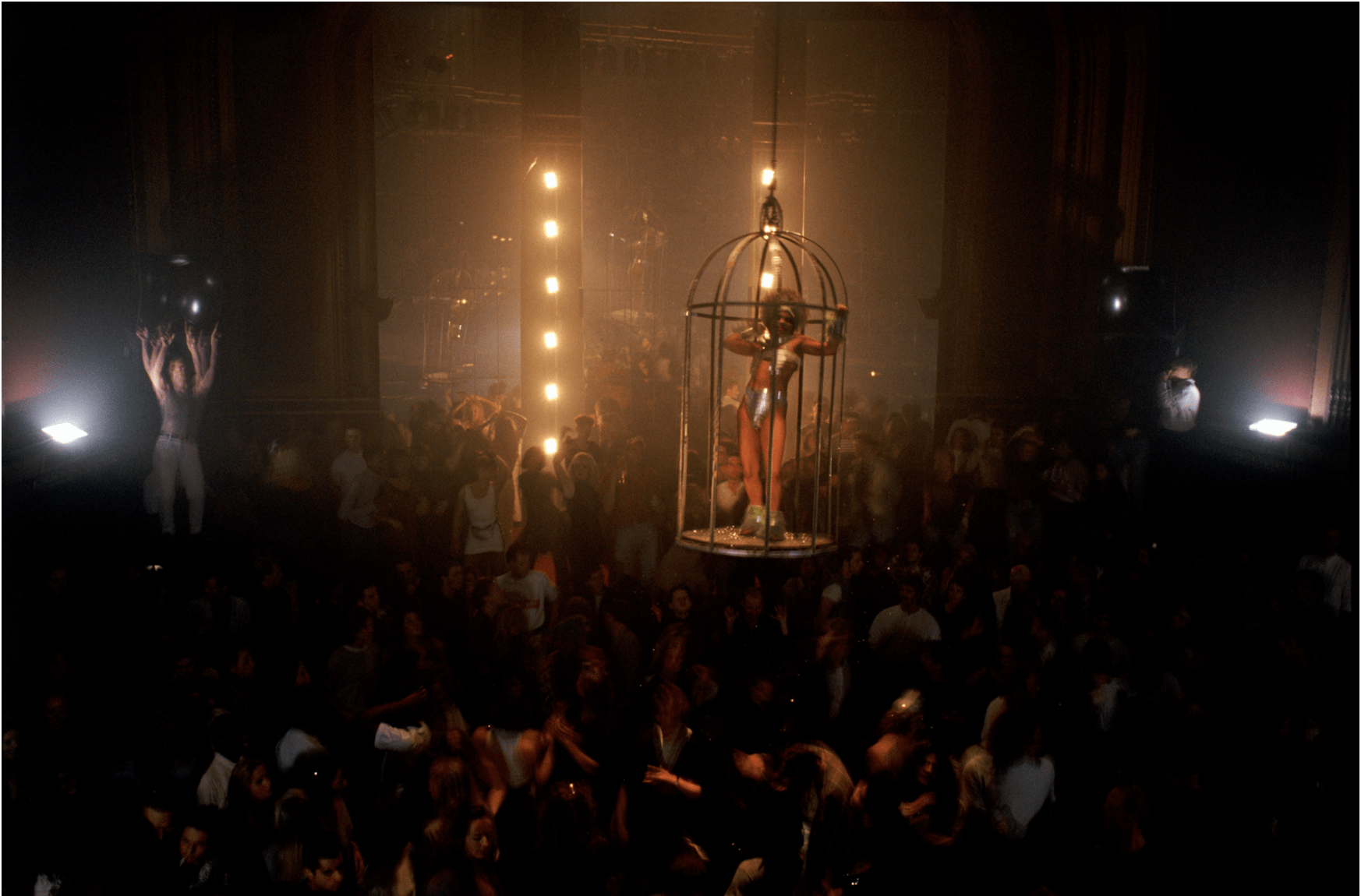 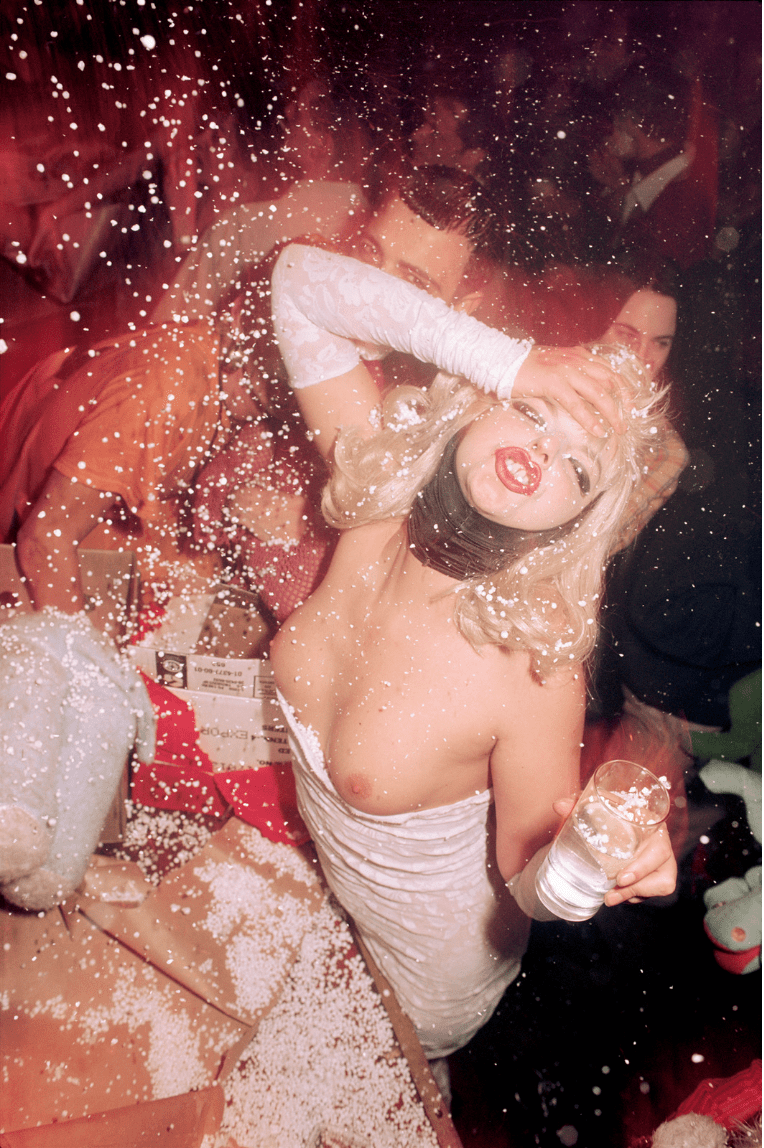 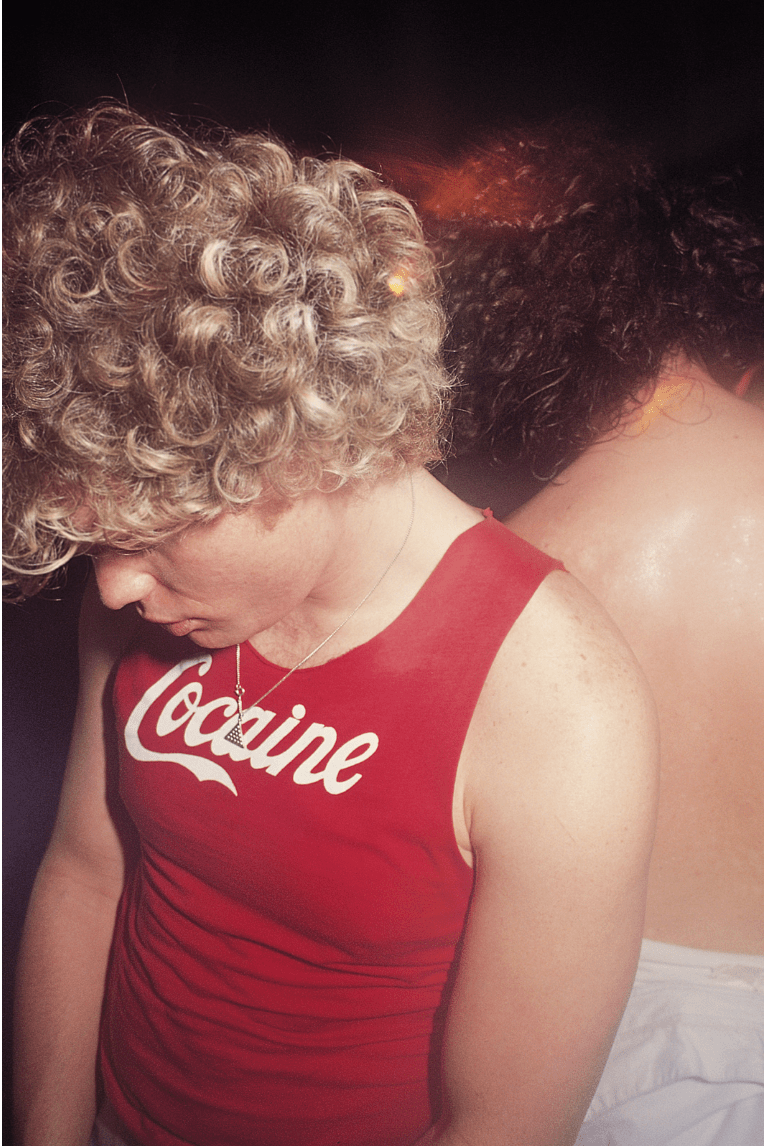 Cleo Campert (b. 1963, Netherlands) started photographing club nights at the infamous RoXY in 1989, and then continued to work as a party photographer throughout the years. In 2015 and 2016 she documented the Dutch festival culture, focusing on both the crowded events and the serene landscapes in which they are situated; the natural environments, when the festivals are over and the people went back home. But in this interview, we mainly look back on her ‘RoXY years’, now 30 years ago.

The club was known for its extravagant shows, which were depicted in large, often multimedia, sets that changed every six weeks. The RoXY was also known for its very arbitrary door policy, but the strict selection guaranteed a pleasant atmosphere of trust and freedom inside – much in line with contemporary clubs such as Berghain in Berlin.

You started your practice in 1989. How did you manage to get your camera inside the RoXY?

Joost van Bellen was a friend of mine, he was a resident DJ and I liked going out there. I was around 25 at the time, and already had made photos in the RoXY for a magazine (De Haagse Post). It was for a subsection on street fashion, so about everything that was in and happening at the time. I was documenting this illegal party at the time, and I really felt connected with the music and with the photography. I then felt an urge to do this in the RoXY too. I asked Joost if I could start out as a resident photographer, but they’d just hired someone. However, not much later, as it turned out that this person was not very suited for the job, they asked me to do it. The rest is history.

The contract was from 1989 till 1993, and after that I started working for print media again. But I always ended up coming back. I’d become part of the furniture, so to speak. The RoXY had become a second living room to me, as I went there 3 or 4 times a week – and the times I had there were amazing.

I only know about the RoXY through stories, and people often mention how progressive this club was, especially for that period in time. Is this true?

Fully expressing your own persona was something refreshing and new at the time. Before that, the DJ was on a stage and the audience was standing in front, mostly looking down to the ground and trying to be lowkey. Everybody was dressed in black and listening to New Wave music. Laughing was definitely not perceived as something cool. But when house music started to come up in the RoXY, this attitude radically changed. It seemed more focused on positivity and creativity, and people weren’t just dressed in black anymore. And yes, drugs were part of the scene too.

Nowadays, pictures from a night out are being instantly shared on all kinds of social media platforms. This has become part of the whole experience. But I reckon this did not really happen in the beginning of the 90s. What were the pictures used for at the time?

Photography was a completely different field back then. First of all there were way less women in photography. There was always enough work, you never had to stress about not having a job. Around the end of the 90s, this started to change: magazines had smaller budgets, advertisements dropped, so there was less money for reports. On top of this there was the rise of the art directors, which became like a middle man in the process. This caused some friction because art directors work primarily with photographers that could carry out their own ideas.

Was there any filter of what could be shown?

I was the photographer of the club, exclusively (except when there were press photographers on special events like the Loveball). No other pictures were taken, as visitors were not carrying around image-taking devices. There were no smartphones. As a photographer you were respected, and nobody really minded that I took photos of them. And what happened after with the images was relatively unclear, also to the RoXY. They did not really make any promotional use of the material I shot there, during the parties. But the newspapers and magazines were interested in it. De Nieuwe Revu which I started working for around 1994 as well, was very interested in the topic. They really loved to see images of such extravagant nightlife. It just had something very magical. People could walk around naked and no one would care. That was what great about the RoXY, it was a safe space.

For me the limit of when to take a picture was when people were completely out of it, having no clue of what they were doing anymore. I did not want to show that, out of respect. There was no reason for it. For me, in those days, it was just about shooting pictures without thinking what would be the use for it later on. Later it became a little more of a conscious exercise. Everybody wanted to see the RoXY imaged as extremely extravagant but actually, most of the people inside looked very ‘normal’. Only some of them really stood out.

So how professional was this?

It was just another mentality altogether. I was walking around with 2 Nikon cameras in the club. One with a flash with its pretty heavy battery, and the other without. I always took pictures of the events that were happening, may it be an on-stage performance or the set of a DJ. Usually this started around 1AM or 2AM. In the meantime I would take pictures of the people in the audience, put the equipment away, dance for a bit, and pick up the cameras again. So it was not really a set plan on beforehand, I did how I felt like.

One time I did do a photography gig while being stoned at a performance (Snap). It was my first stadium gig at the time, I was photographing a lot of parties outside of the RoXY already, but this gig was huge. I vaguely remember that at one point I was kind of out of it, and I was standing right in the middle of the stage taking pictures of the frontman, and I realized that I should not be there at that time. So I tried to head down, and he started following me while performing. And I just thought ‘get out of here Cleo’ and was super embarrassed. He thought it was quite funny. But to be fair everyone at that concert was kind of out of it and nobody really cared anyways. The pictures turned out great though. It wasn’t even for a job, it was just for me. On a job this would never have happened, I would never use drugs on a job, there is too much distraction.

What made you decide to publish a selection of these pictures now, 30 years later?

I’m in the possession of all the material, and at one point I’m going to scan all the (positive slides) but first need to digitize them. The sale of prints also makes it possible to afford these practices. I’m motivated to continue working on it as I get a lot of positive feedback. People love to see the images from back in the day, and they’re curious to see more. At one point I want to make a book out of all the prints as well.

These photos are part of the special edition Cleo Campert issued for the 30th anniversary of her RoXY photography, for more information you can email to info@cleocampert.nl.