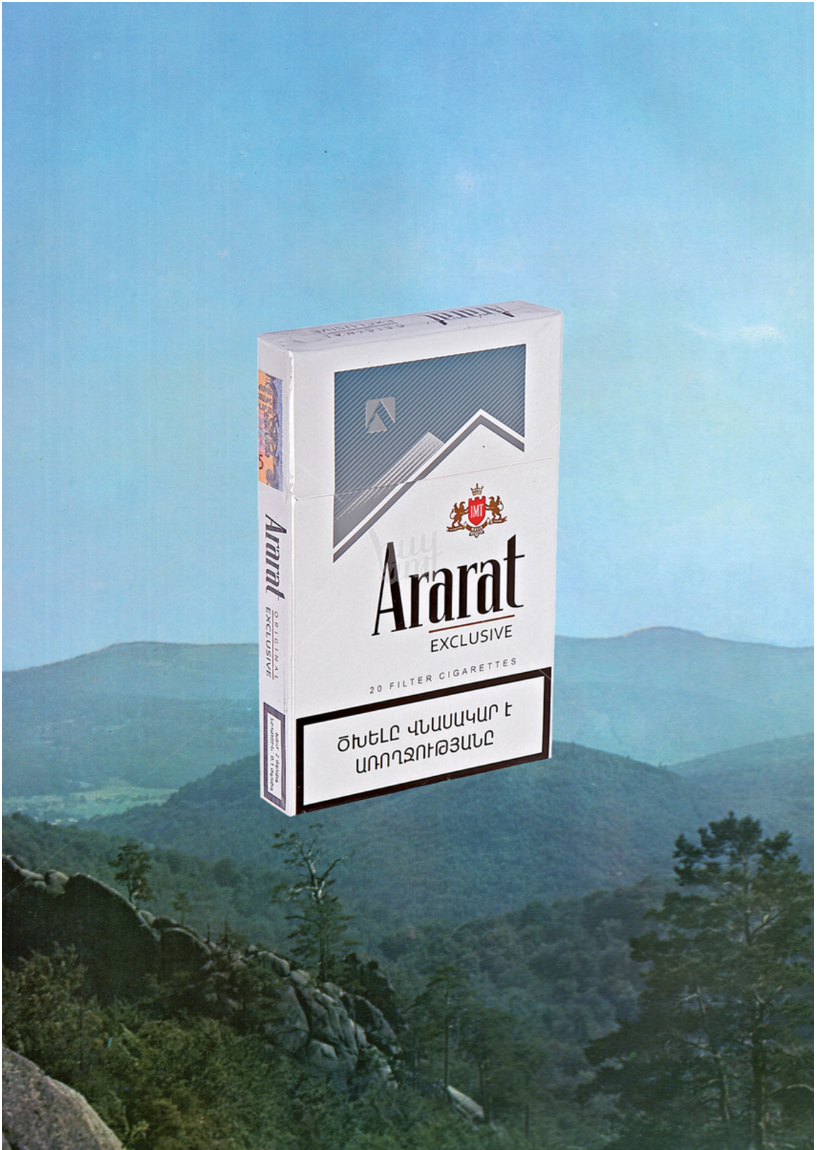 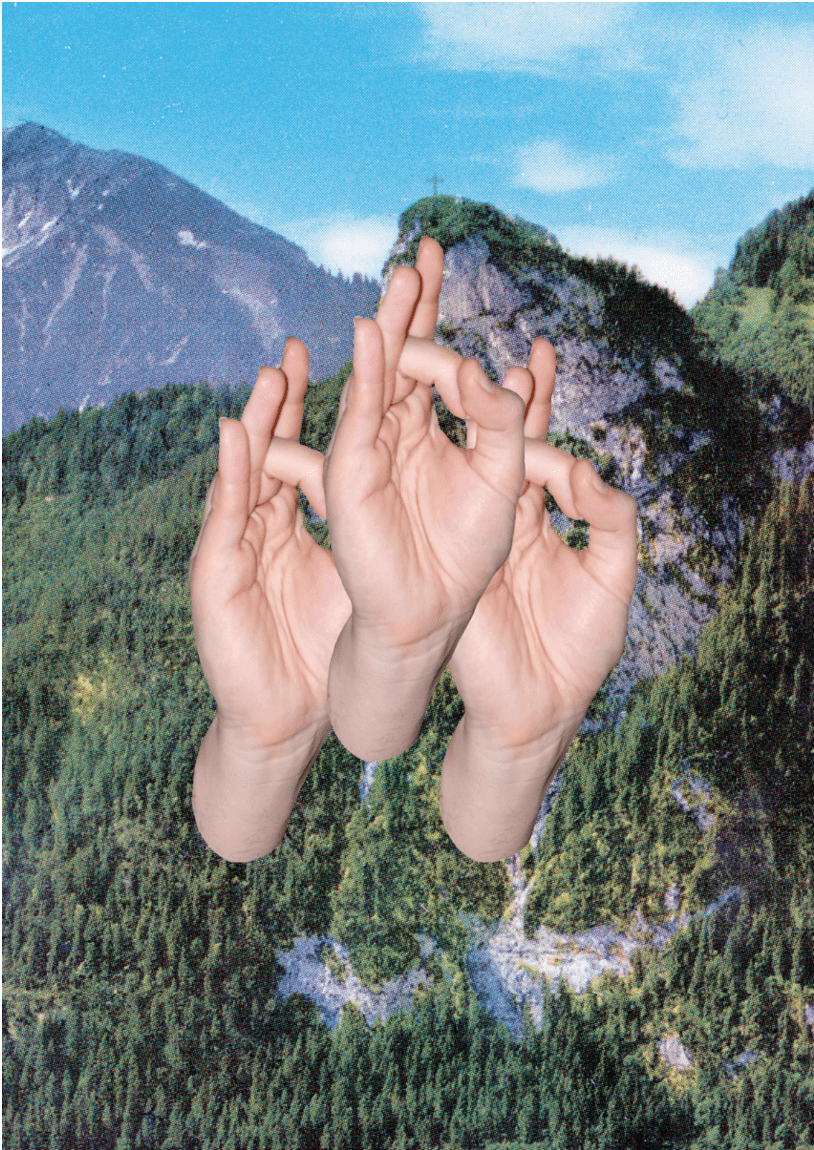 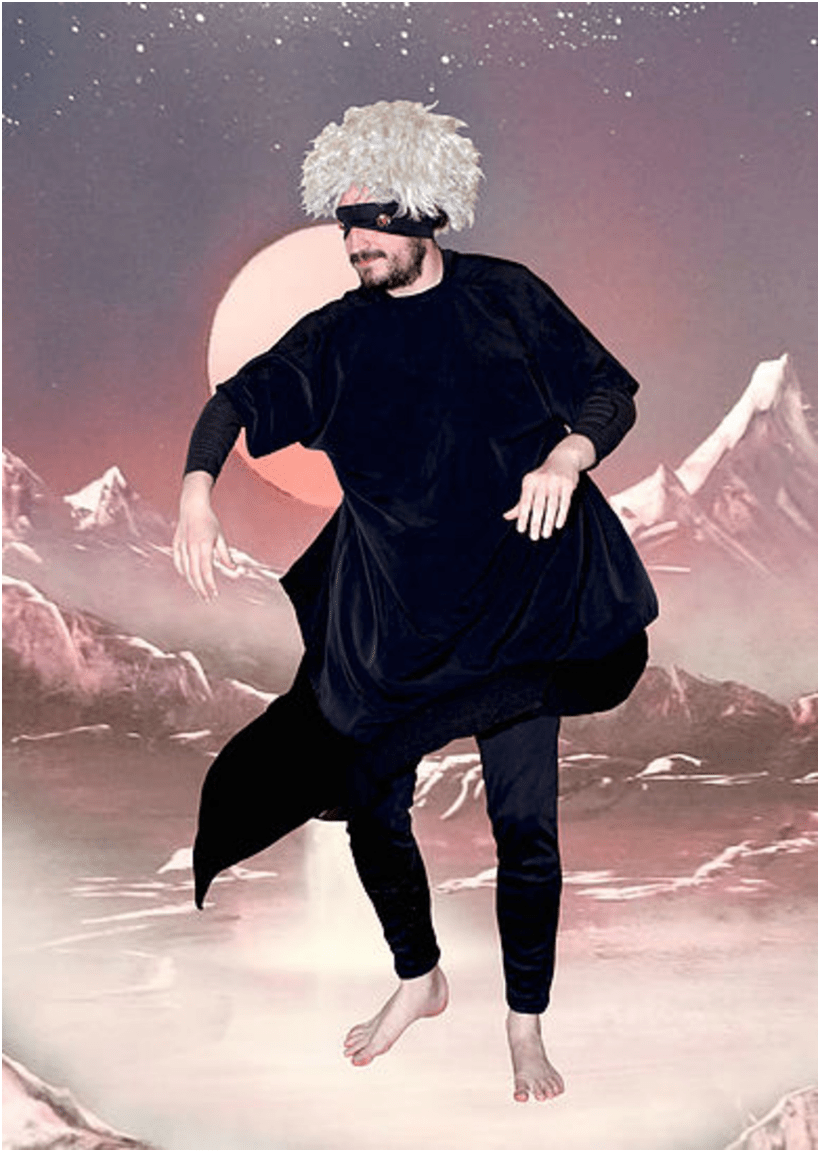 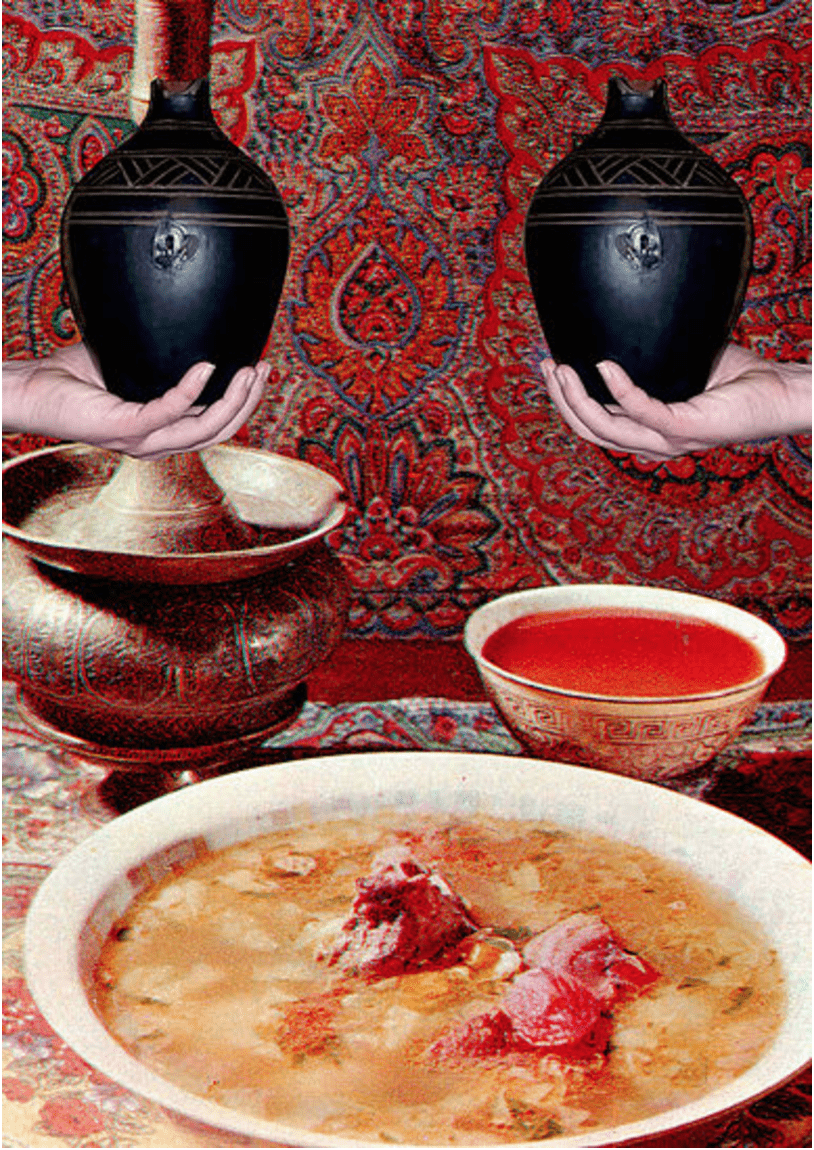 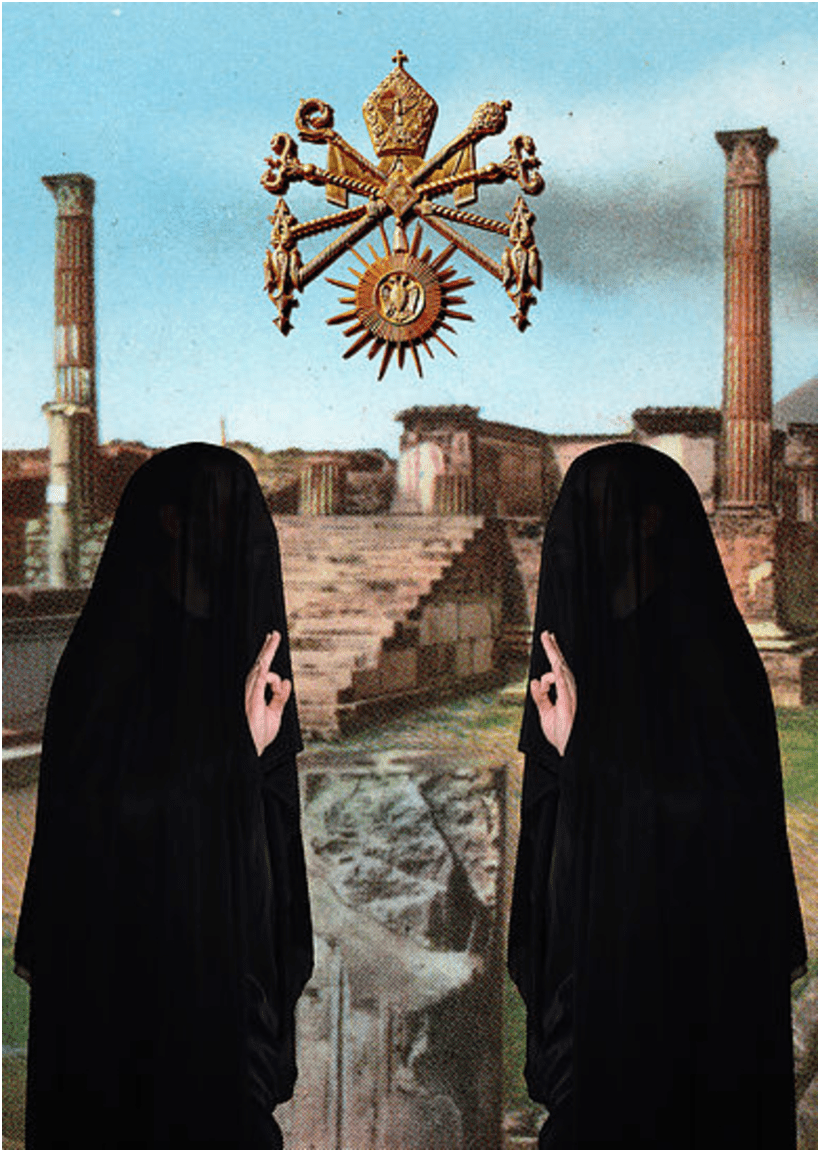 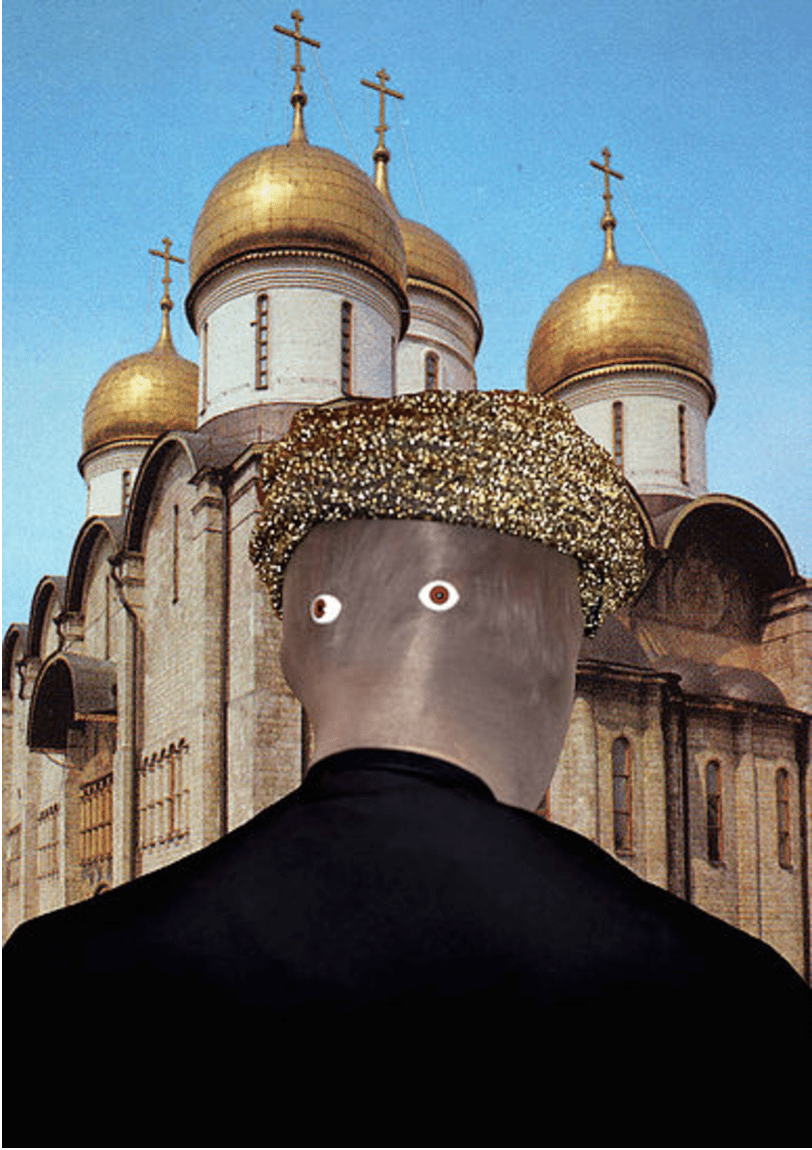 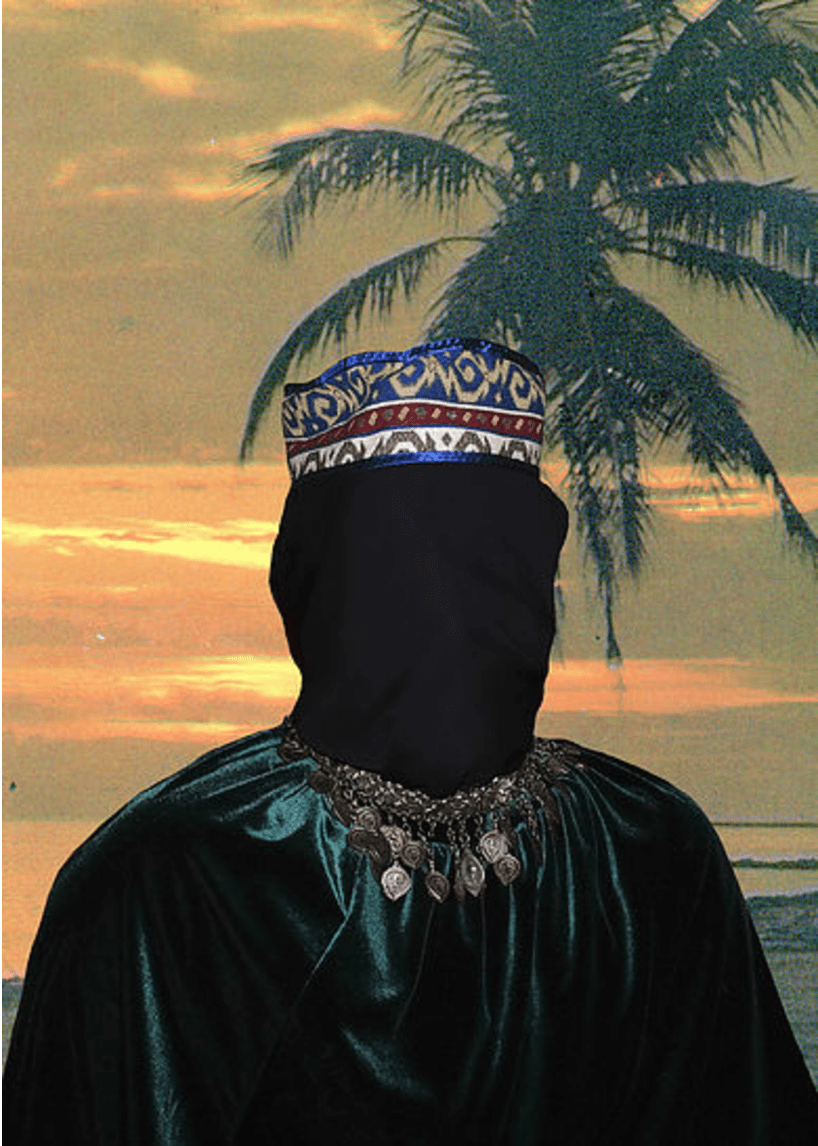 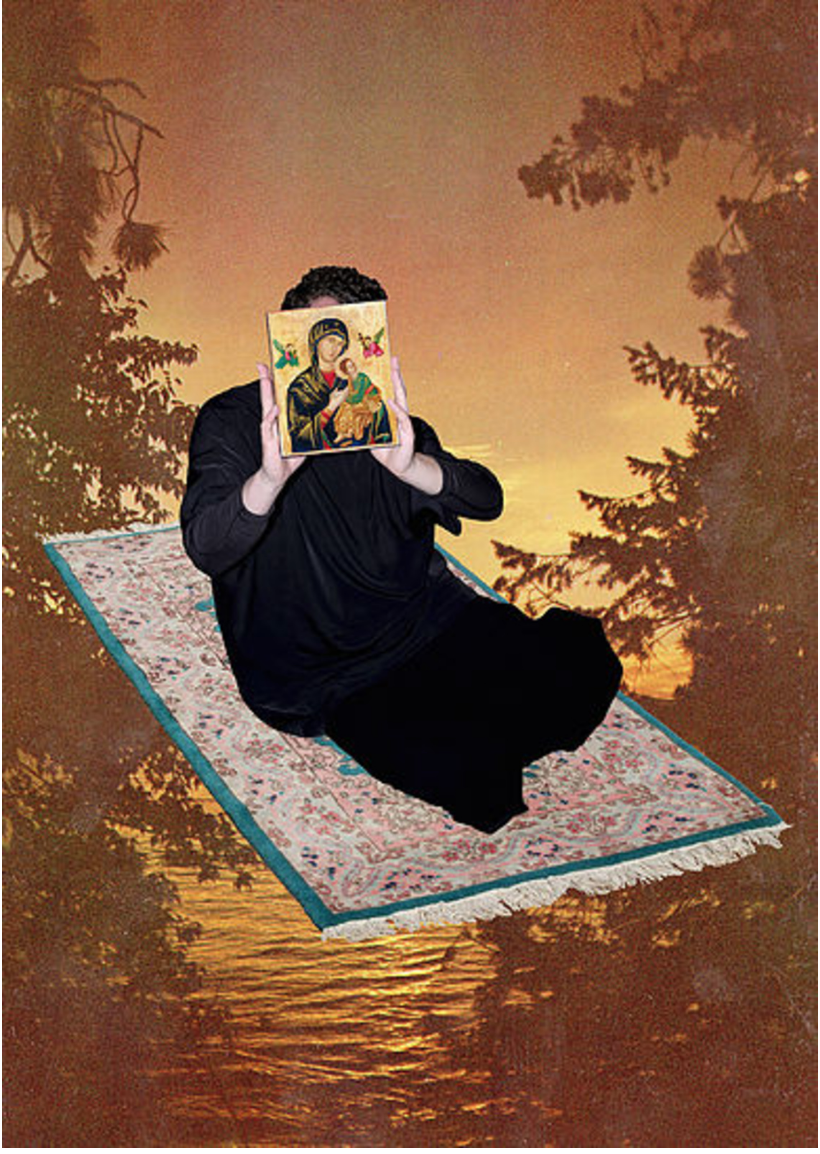 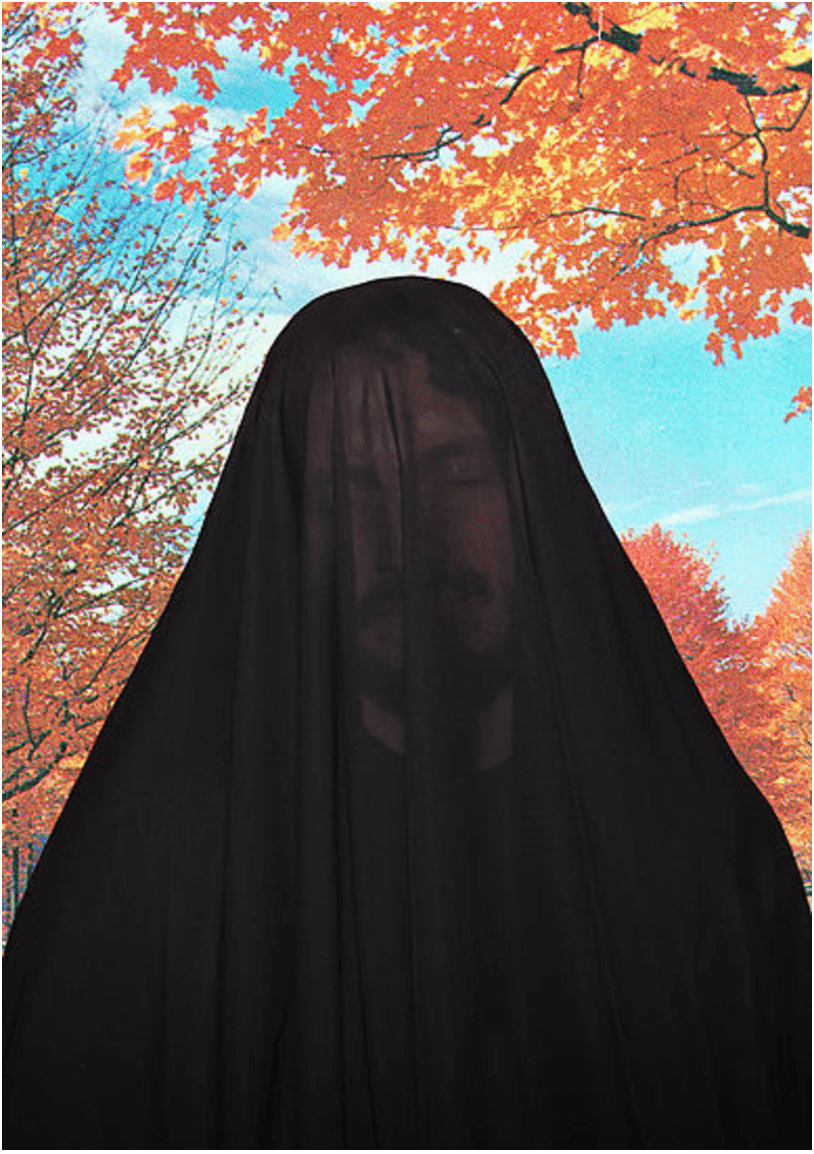 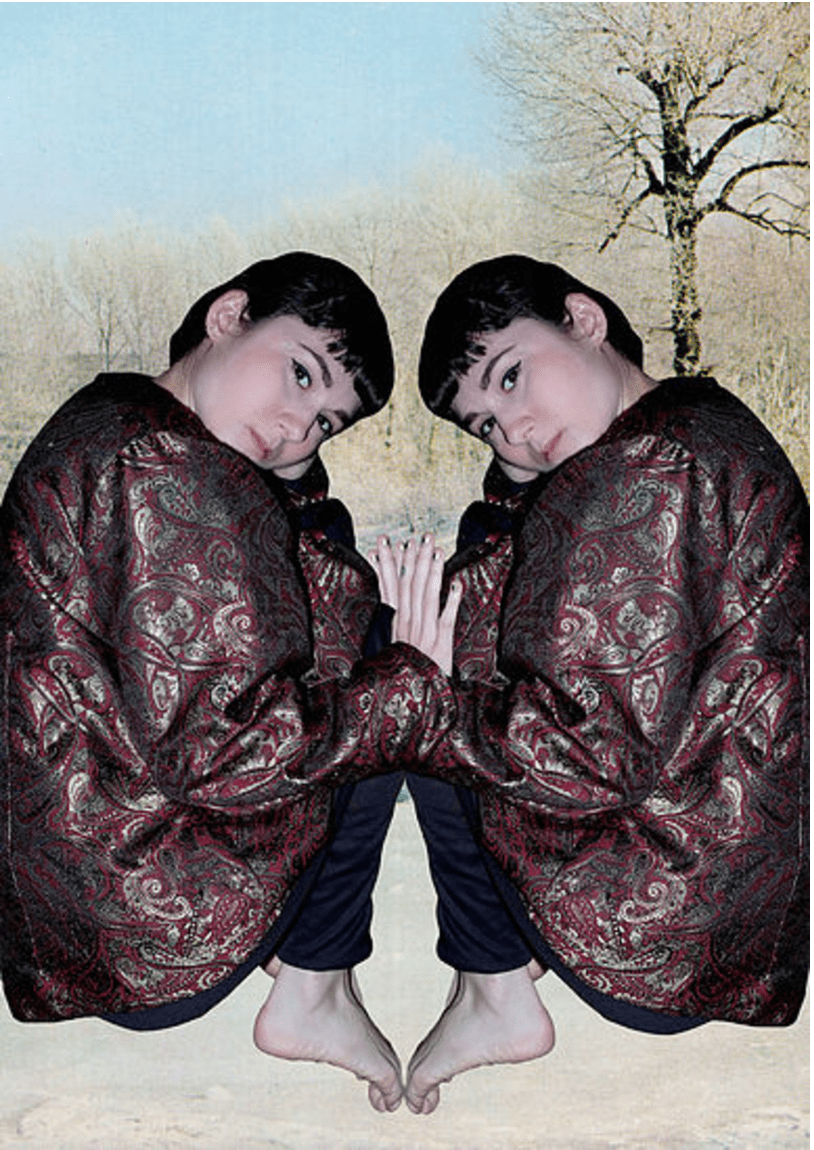 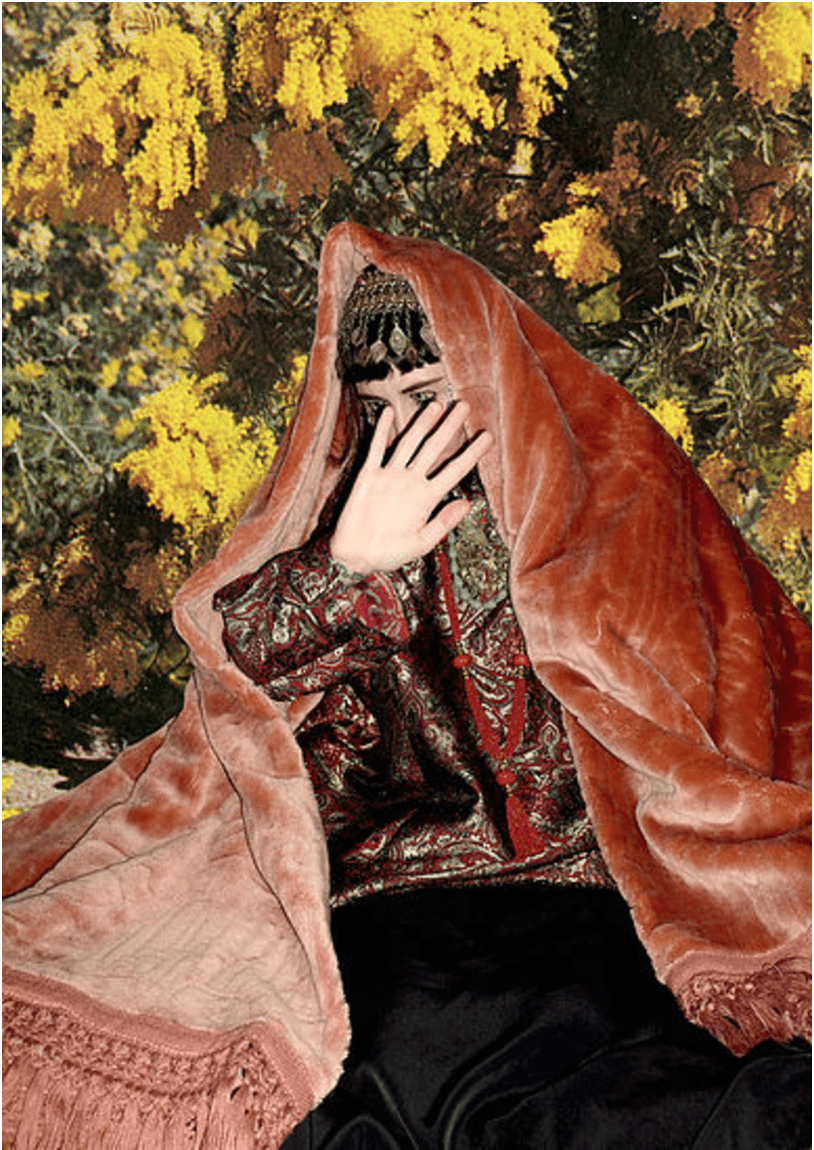 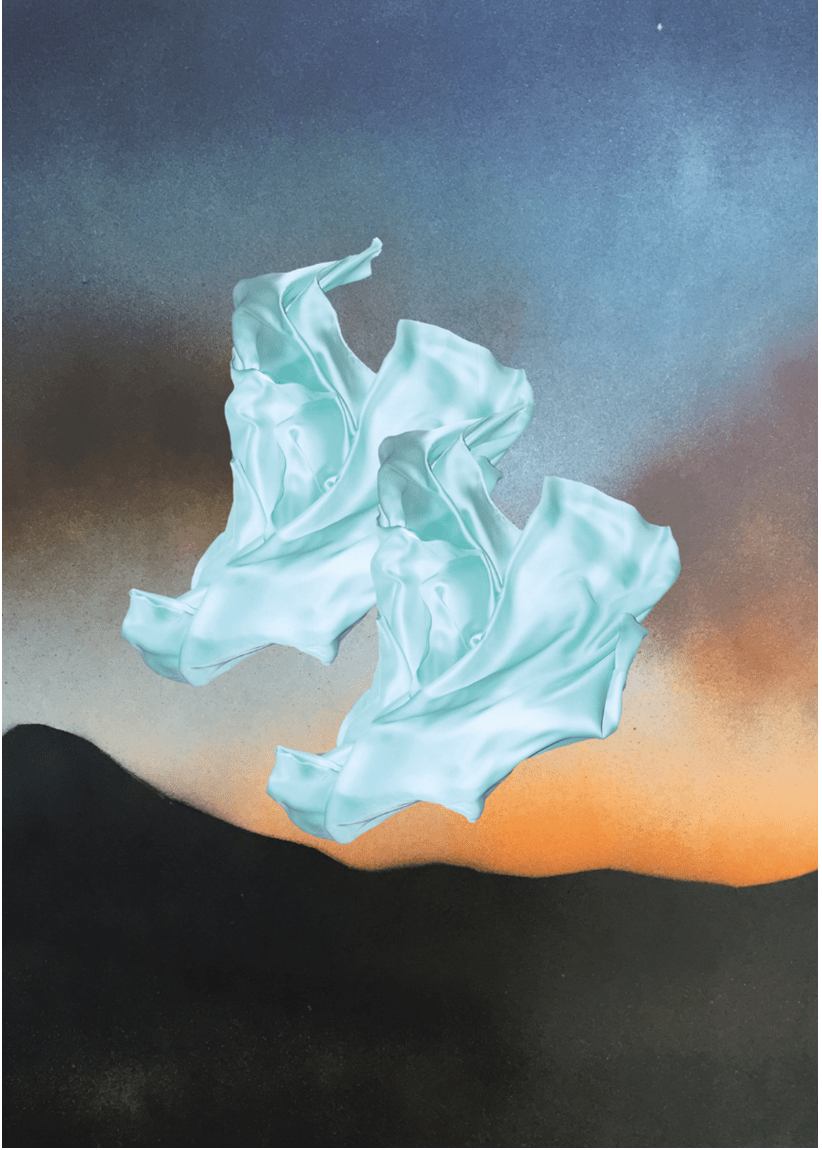 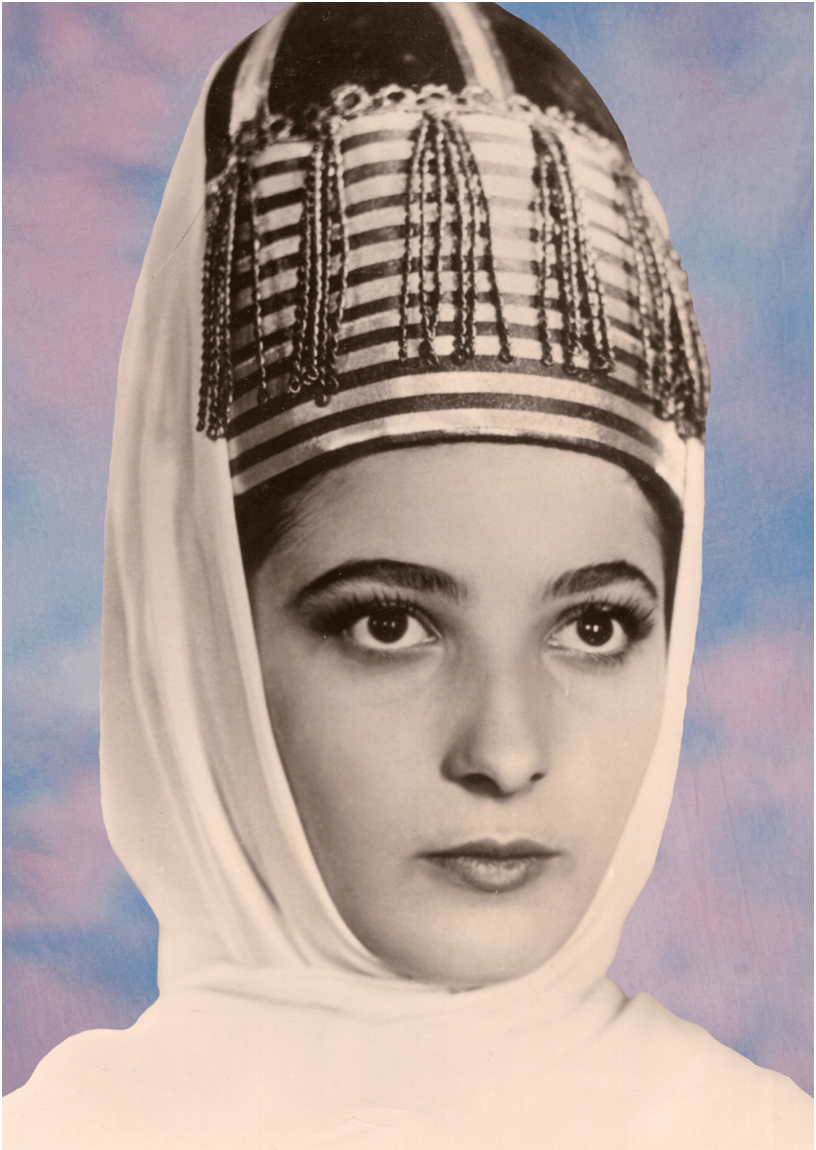 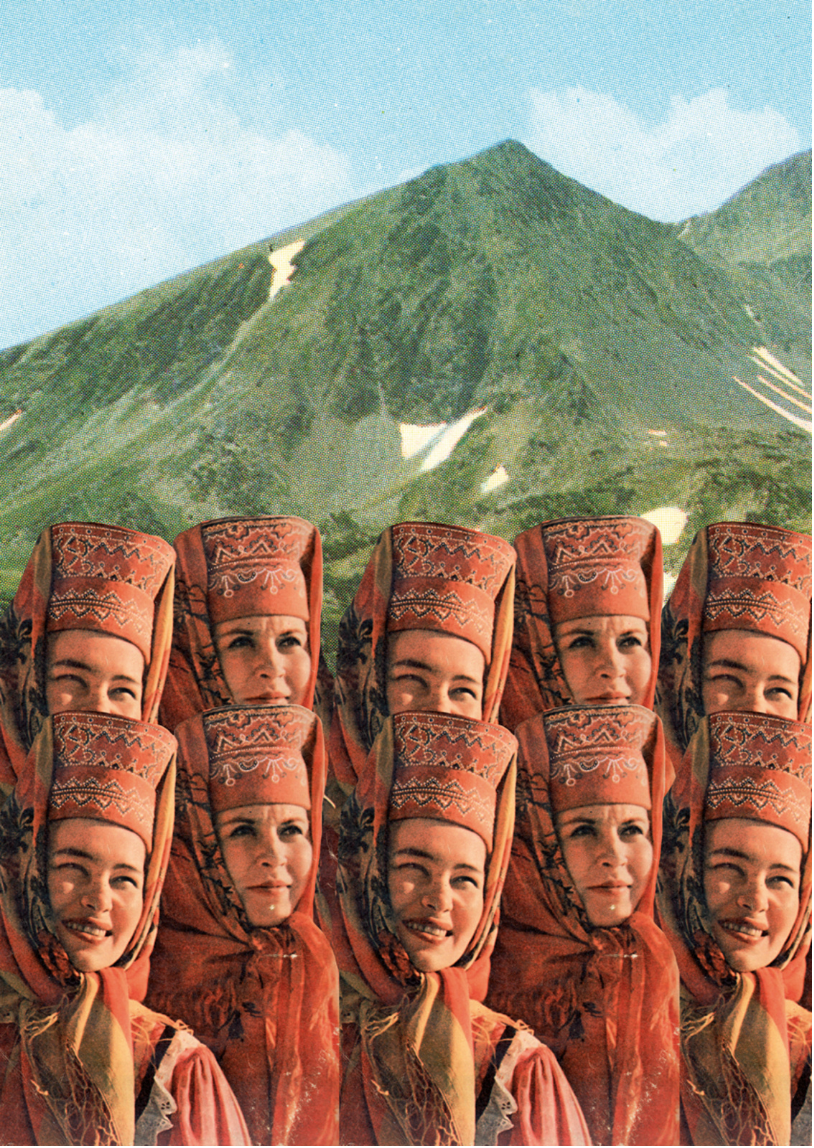 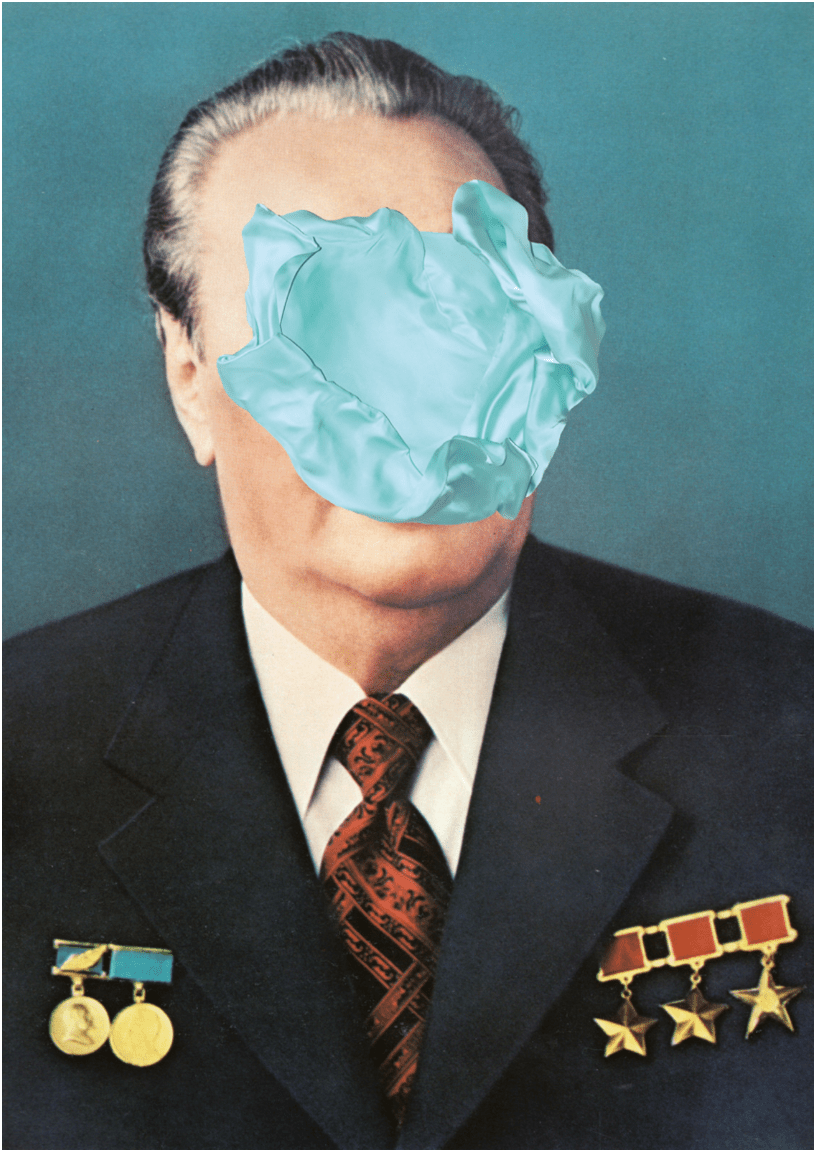 Armenian society today appears to be torn between its own millenary tradition, Soviet nostalgia and the desire to come closer to the West by finally emerging from the shadow of the Genocide. This multilayered culture is well represented within Lucie Khahoutian’s (b. 1990, Armenia) latest body of work, Infinite Travels. GUP talked to Khahoutian about this series, which is currently on show at Getxophoto.

Contemporary graphics are impressed upon traditional imagery to create surreal compositions of people, landscapes and everyday objects. Khahoutian: “Through these collages I aimed to create an encounter between traditional Armenian/Caucasian visuals and patterns and more contemporary graphics thus illustrating the phase of transition we are experiencing in Armenia […] Georgia and Armenia are very traditional and conservative countries yet we are opening up to the world and assimilating new influences, ways to live and to think. This cultural encounter again, is a form of collage.”

The series follows the recent development of a region where conservative ideologies are transforming and isolation is becoming less of an obstacle thanks to digital media and interconnectedness. “I am very attached to the idea of bringing light on Armenia, Armenian artists and our cultural scene. We’re still a very unknown country for many people and are associated to the Genocide at worst or apricot jam at best.”

Khahoutian’s production has been influenced by the work of renowned Caucasian artists Niko Pirosmani, famous for his depiction of rural life and family gatherings, and Sergei Paradjanov, acclaimed for the satirical messages contained in his subversive movies. “My series of collages narrates bits of folk tales, fragments of the war, the genocide, the omnipresence of Ararat, and the symbols that have been surrounding my childhood. Food, music, architectural ruins, religious imagery, mountains, strong female figure are the main elements of my stories”.

While she focuses on religion, spirituality and mystical matters, Khahoutian aims to let Armenian humor transpire through her playful approach. The images can be apprehended without any prior knowledge of the topics explored and still be not only readable but enjoyable. “I enjoy blending Armenian traditional visual codes with a more European or Occidental environment. Involving both my background and elements of my current life, I weave a visual tapestry of my surroundings and aim at offering a complete and subtle visual universe in which Occident and Orient coexist smoothly.”

Lucie Khahoutian is a member of the Live Wild Collective. Her work is on show at Getxophoto from September 5 to September 30, 2018, where she presents works from different series linked by the theme of memory and cultural identity.