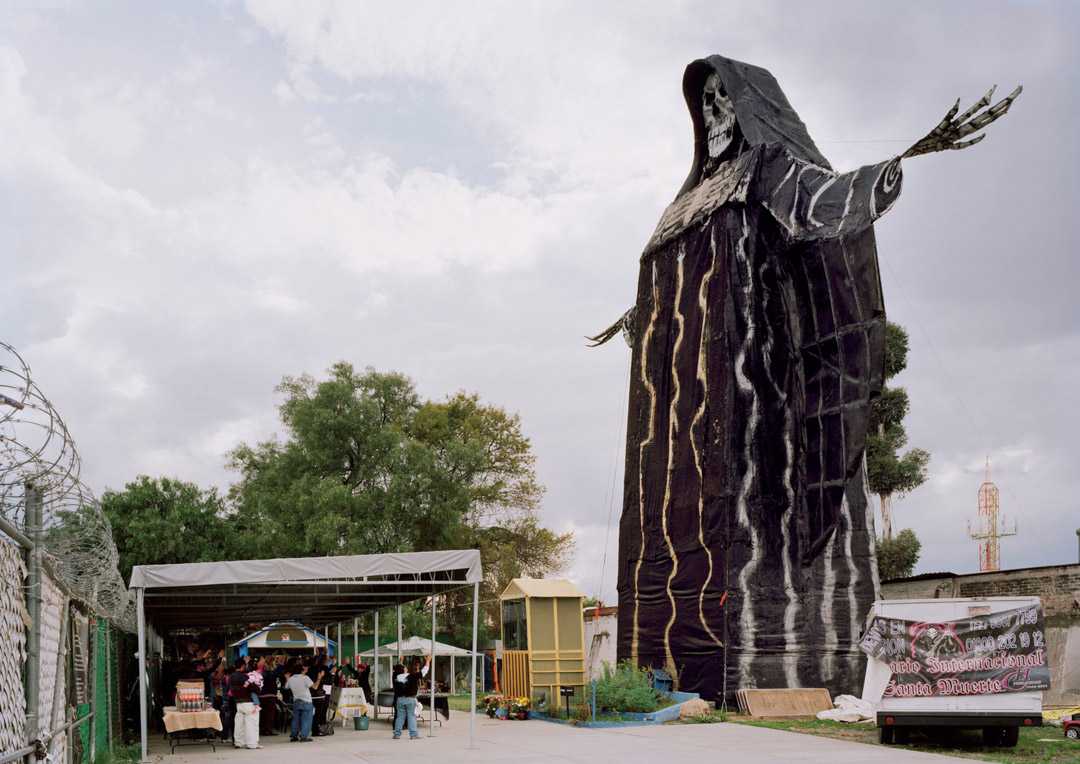 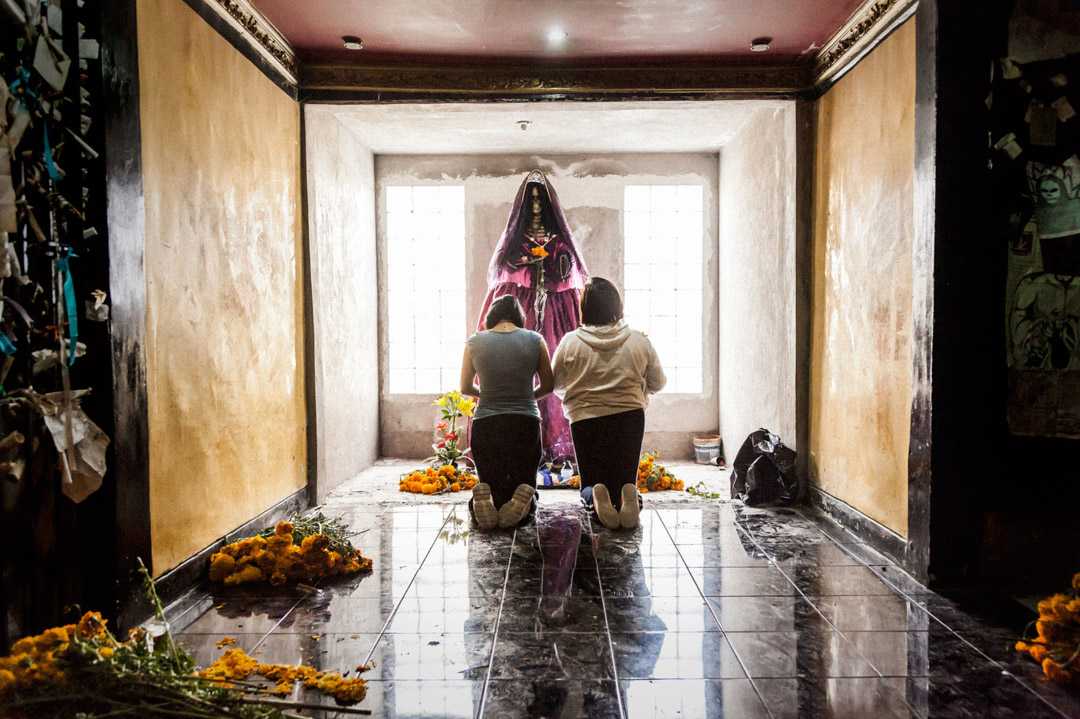 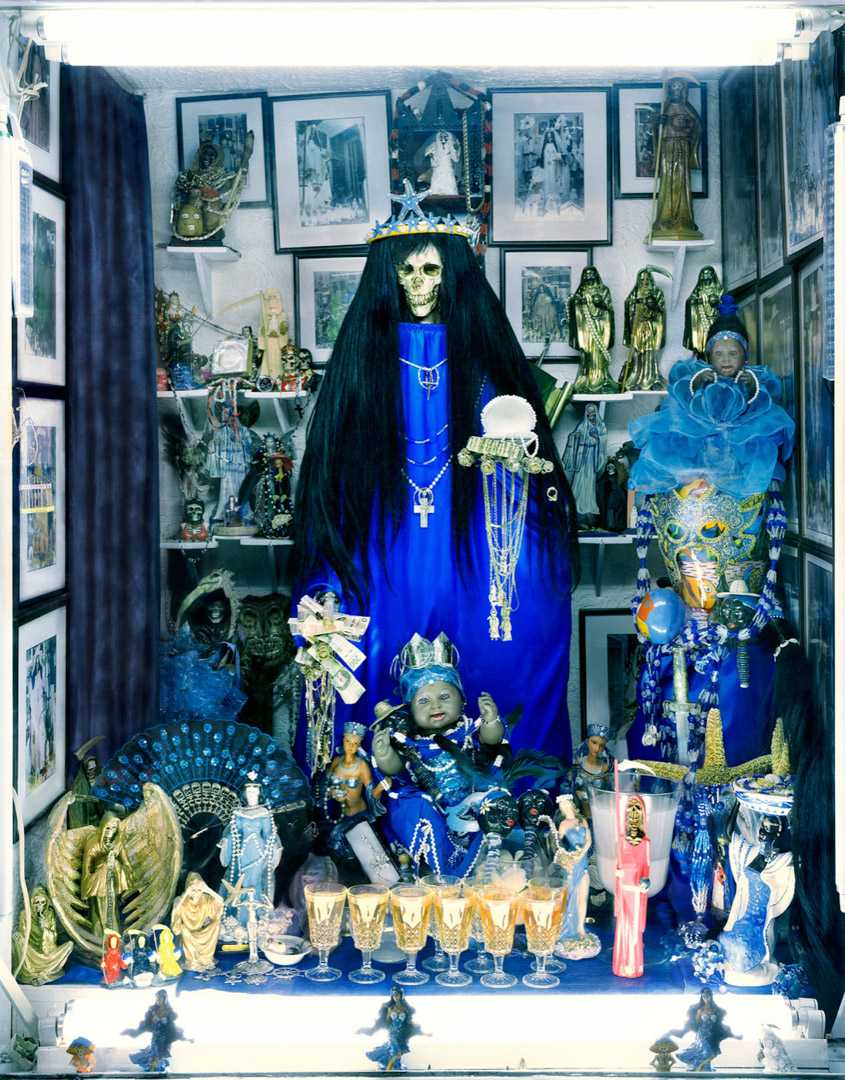 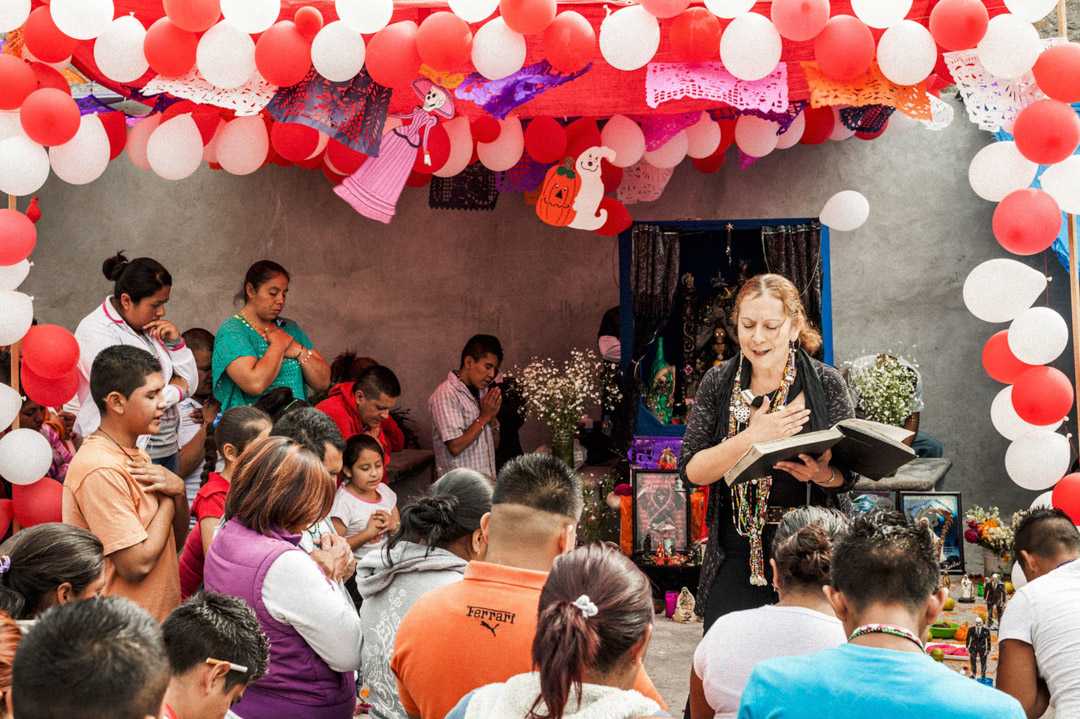 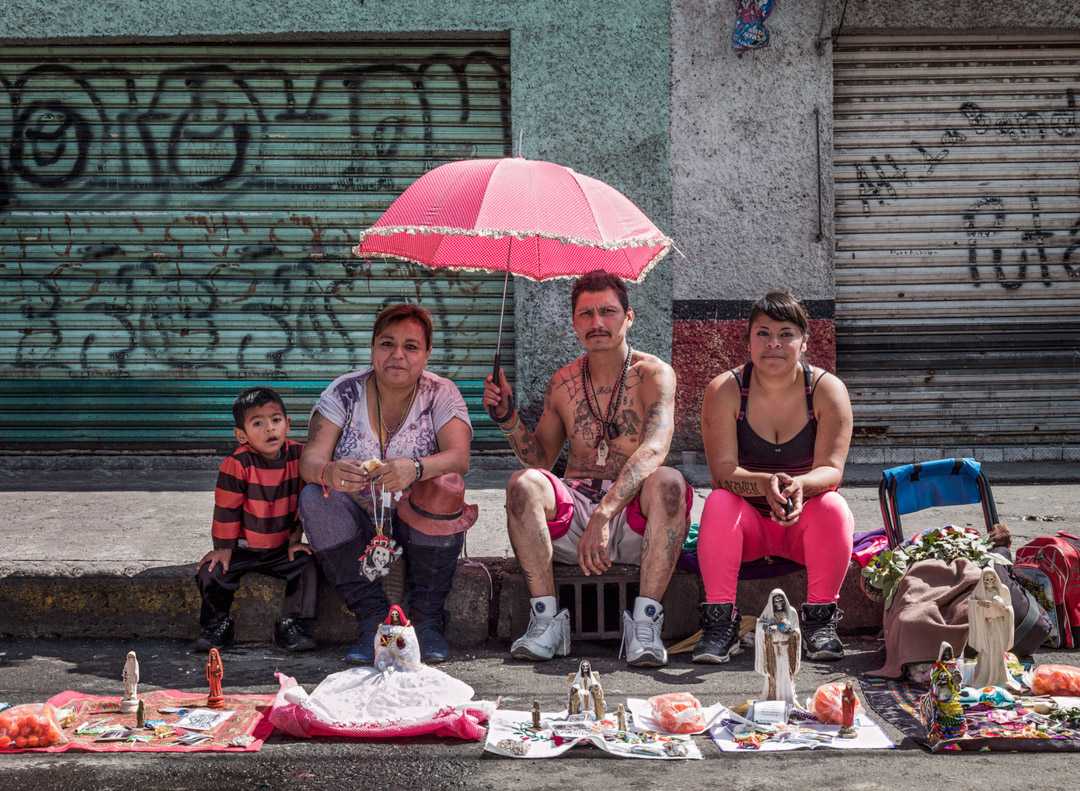 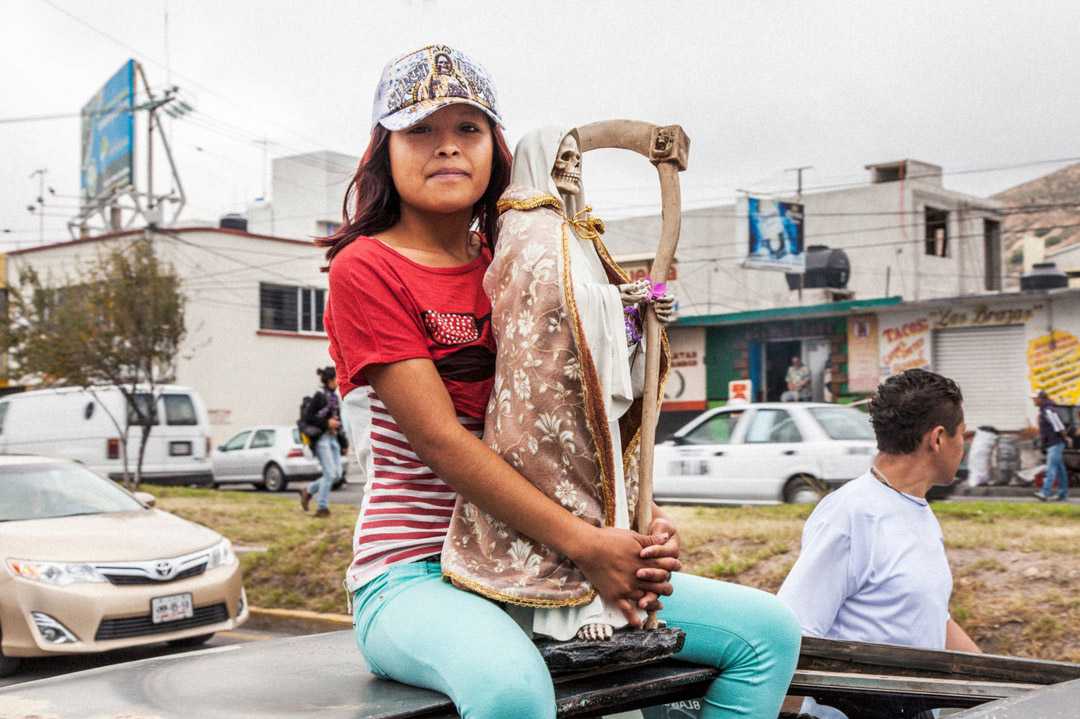 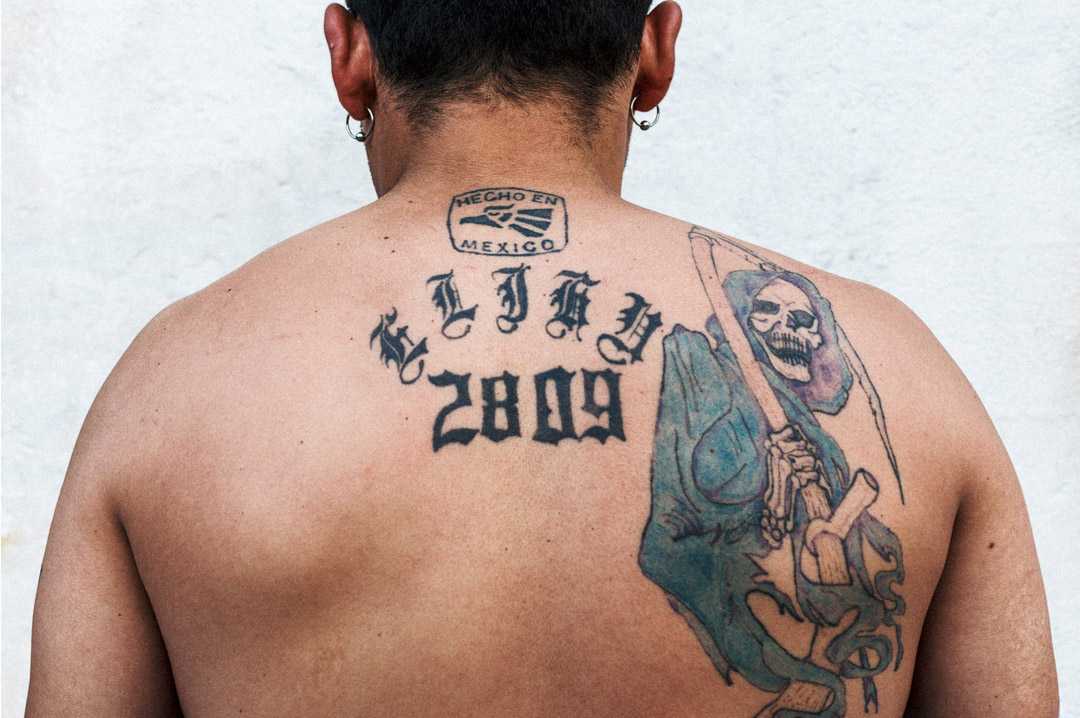 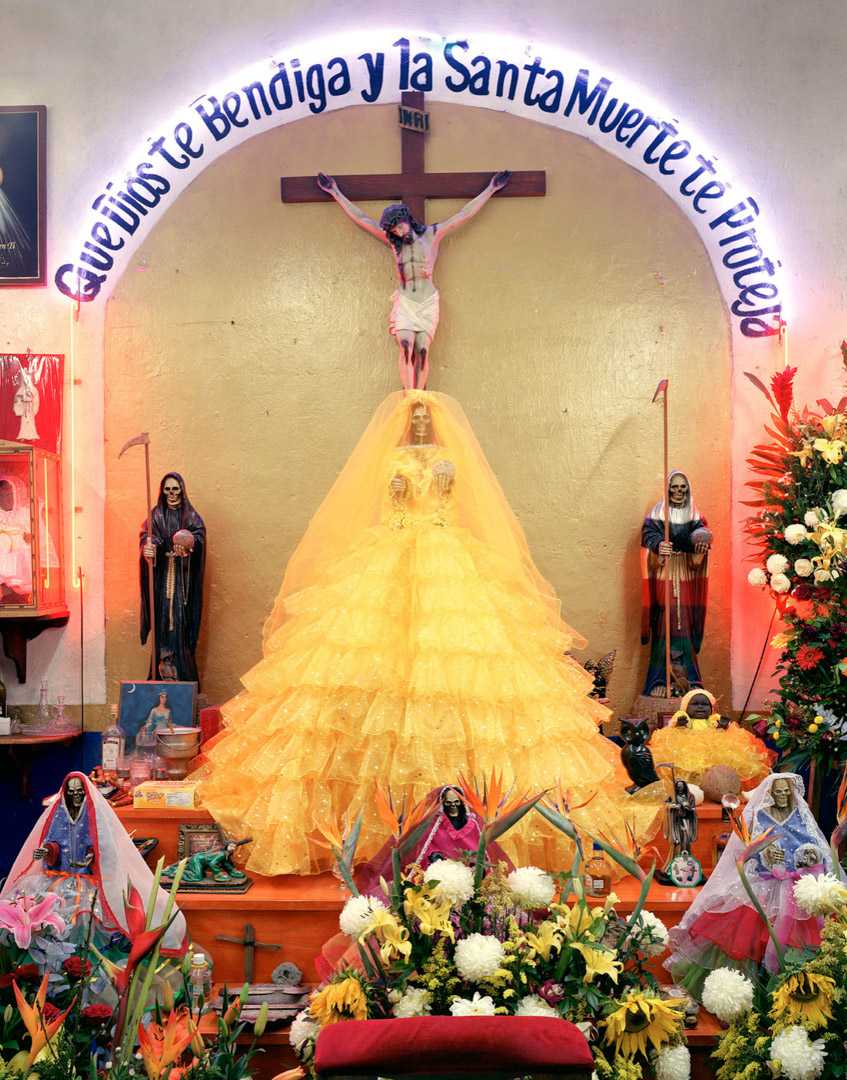 La Santa Muerte, or Holy Death, is a Mexican folk saint who has existed in her present form for around 50 years, with origins in Aztec times, although she has grown in popularity massively over the last 10 years, now with 10-12 million followers around the Americas. Angus Fraser (1975, UK) spent four years documenting the followers of this so-called cult, denounced by the Vatican and Mexican government as devil worship, due to the fact that she, also known as La Flaca (Skinny Girl), La Huesuda (The Bony Lady) and more, is not a saint at all, but in fact a personification of death itself. Fraser was the inaugural winner of The Photographers’ Gallery’s Bar Tur Photobook Award and was given the opportunity to turn his series, Santa Muerte, into a book. The resulting publication contains portraits of believers, shrines, private and street gatherings and explores the relationship Mexicans have with death, in contrast with Western views.

The photographer travelled around Mexico to photograph the shrines, including the three most popular shrines in Mexico City, all of which were created by people outside their homes or on the side of the road. The religion is not supported by the church, although many followers consider themselves Catholic, so people are forced to worship at home or in public places. The images show a huge range of shrines, from private, candle-lit altars in the home to a huge 75-foot statue, all varying in colour, decoration and purpose. Candy, money and alcohol are placed around the shrine, among other items, to appease Santa Muerte and thank her for granting wishes. The only consistency is the iconic statue itself, always a skeleton, holding a scythe and a globe and draped in robes, which can vary between seven symbolic colours and are often changed. These luscious, vibrant altars contrast with their surroundings, often in the poorest parts of Mexico, run-down and scrawled with graffiti.

Fraser also includes portraits of practitioners, as well as documentary images during ceremonies. The people themselves, ranging from old couples to young families are also brashly-dressed, tattooed and have a sadness in their eyes. It is well known that this cult attracts those disenfranchised with their lives in a country where the violence never seems to end. They pose together with their own Santa Muerte statues proudly, some clutched close to the heart and others so large they are held rather comically, overwhelming the owner. The images make clear that many elements about the religious practice are rather makeshift: people erect their own altars and conduct services based on Catholic rosaries. A particularly endearing image shows the close-up of a woman’s face, her Santa Muerte adorned with scraggly black hair that seems as if it has been cut directly from the head of her owner. These people are clearly utterly devoted to this saint, treating her with love, respect and attention, the church and government’s efforts to prevent this only increasing their devotion.

Fraser was very conscious in the creation of his book that it would be very different from typical depictions of the cult. It is often associated with drug cartels and criminals, due to many worshippers having dangerous occupations, but in fact, policemen are also often followers. The images are miles away from the drama of the cartel, but do contain certain unnerving elements, such as the Santa Muerte who shares her shrine with a statue of the devil. There is a reason why the Mexican government is trying to stop this worship, but it is never explicitly mentioned in the book. Instead, the hints of any wrongdoing are subtle, such as the shrine in which Santa Muerte is the bride of Jesús Malverde, a Mexican Robin Hood figure.

La Santa Muerte may be portrayed in the media as a cult that promotes devil worship, is followed by criminals and is used with malicious intent, but Fraser’s book shows, through documenting the followers, that it brings people together. The accompanying essay by Eva Aridjis states that her followers are “often marginalised and disenfranchised people”, driven to the saint in a “country that has become incredibly dangerous for residents…thanks to cartel violence and gang culture”. Fraser conveys that, of course, there are people who use La Santa Muerte for wrong, but that doesn’t make the religion itself wrong. The reader is left with a feeling of hope for these people who turn to La Santa Muerte as a solution to the crisis and a strong intrigue for the cult that is growing in followers by the day, as the world becomes darker and they grow more desperate.