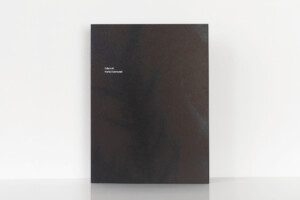 Maria Dabrowski (b. 1988, The Netherlands) researched her family roots, revealing a story of expatriation, war crimes and trauma. ‘Odsłonić’ her self-published monograph, consists of a collection of landscape and portrait photographs created between 2013-2016, making personal experiences and memories in relation to collective history intertwine. Particularly, the impact of communism and the Cold War on Dabrowski’s family are at the heart of the publication.

‘Odsłonić’ is a Polish word that translates to “reveal” or “open”. In 2015, when Dabrowski travelled to Ukraine with her mother, she reconnected with the family and learned of her grandfather’s past. In 1939, at the age of eight, Dabrowski’s grandfather was deported to Siberia – along with his parents, who were forced to work in the kolkhozes (Soviet collective farms). Meanwhile, their house and surrounding land were confiscated by the Soviets.

This information is revealed in an interview between Dabrowski and her grandfather. Their conversation is incoherent partly due to his impaired hearing and distressing memories. The oddness of this conversation provokes a suggested link with the surreal imprint of the Soviet system, somehow exemplifying how the theatrical and disruptive character of the regime has had psychologically affected the generation of Dabrowski’s grandfather.

‘Odsłonić’ consists of grainy photographs which are printed on a matt paper in warm and dim tones, a technique which additionally intensifies the atmosphere felt from the work. The tactile experience of going through the book triggers something between melancholia and nostalgia. The publication is soaked in suspense and what we are witnessing is a personal family story told through Dabrowski’s inner dialogue expressed by means of photography.

‘Odsłonić’ has been shortlisted for MACK First Book Award 2020 and awarded for The Best Dutch Book Designs 2019.