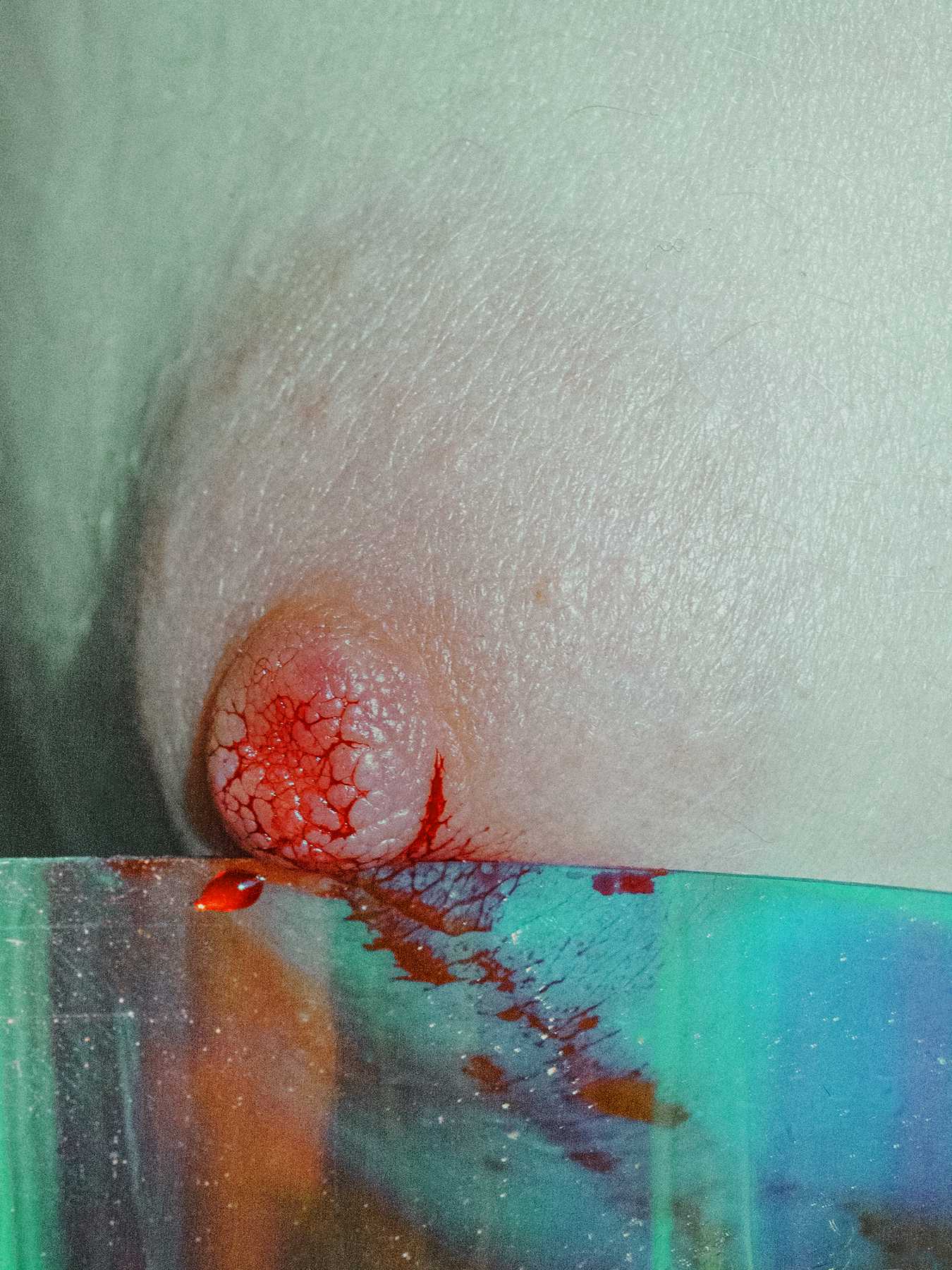 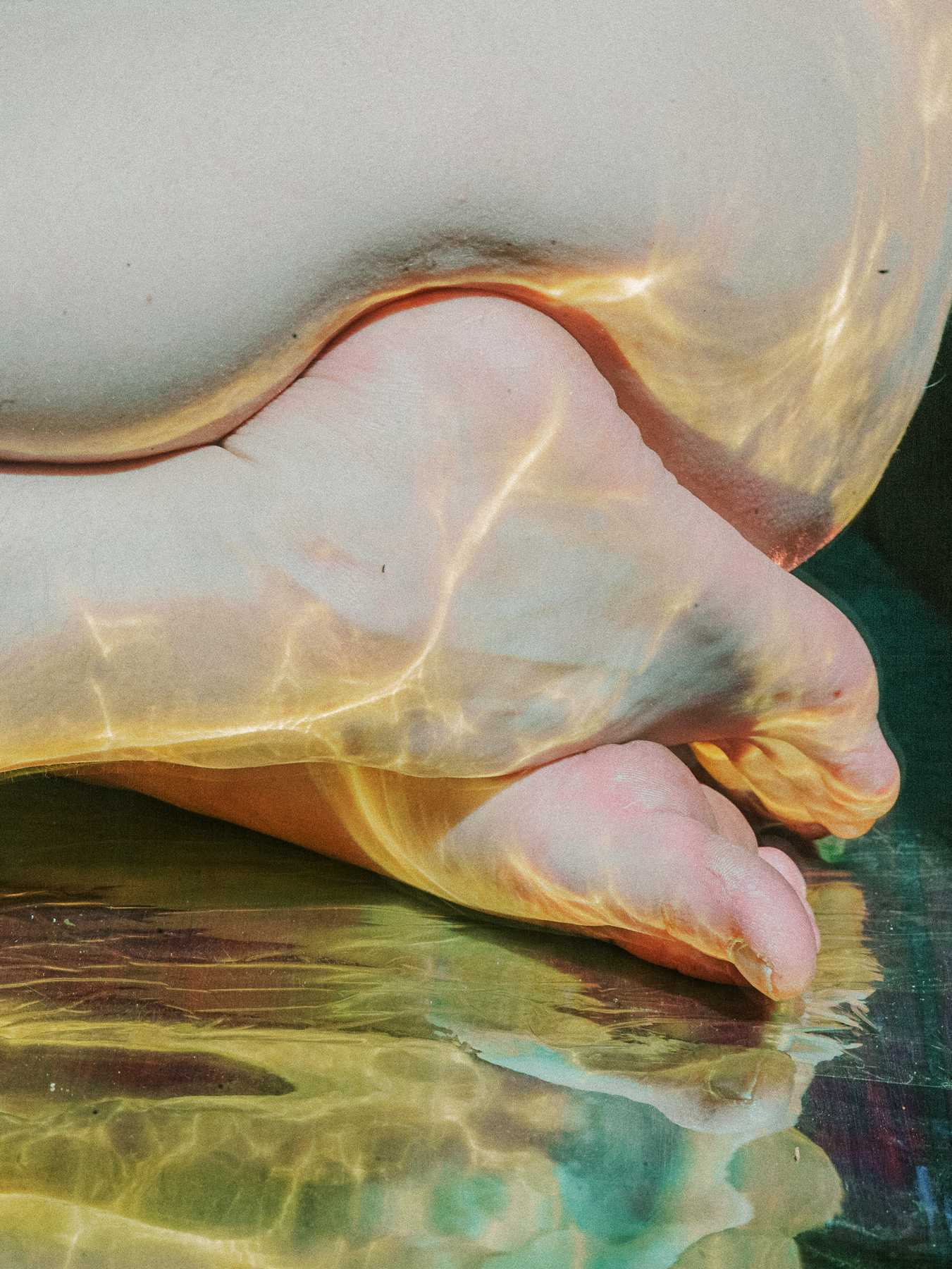 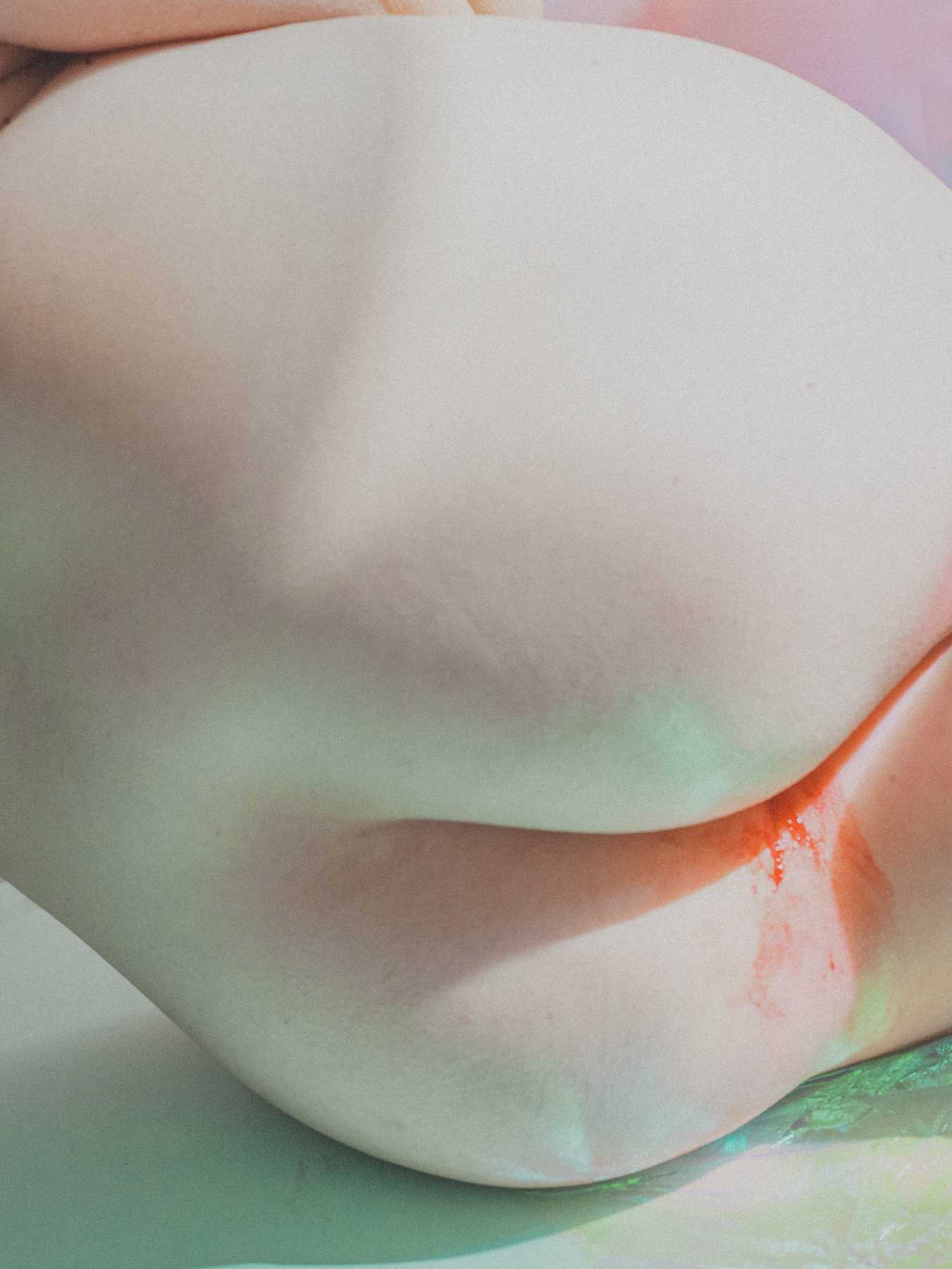 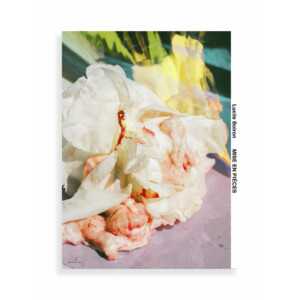 For her second monograph, French photographer Lucile Boiron (b.1990, France) combined self-portraits, still lifes and images taken during the process of cosmetic surgery. Inspired by the initial transformation of bodies through medical procedures – cutting, reworking and stitching – Boiron was compelled to turn the camera lens on herself when COVID-19 hit the world. During a period of confinement, she explored her body photographically, fusing bright colours with shiny materials and liquids.

The images are attractive but also verge on horror, transcending a mere aesthetic encounter into an awareness of the physicality of the human body. The vivid pastel colour palette creates a sense of harmony between the different visual materials. Also, the glossy paper of the book is a unifying factor, turning the images into visceral entities where forms, shapes and textures become the focus point. 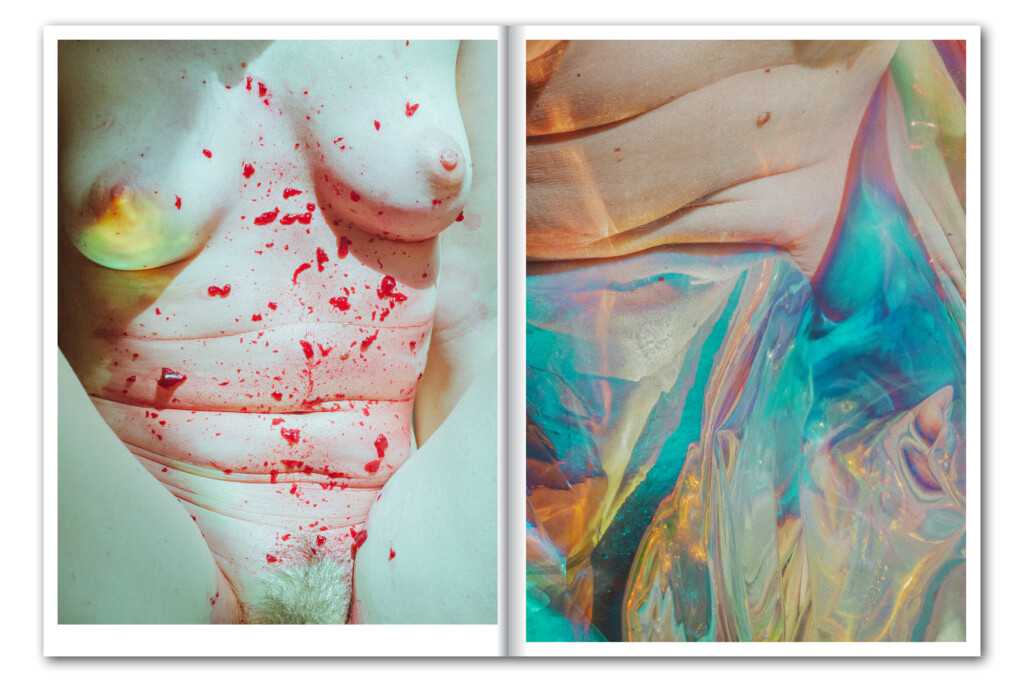 Flowers are combined with organic tissues while bodies function as a canvas – either reflecting light or are splashed with liquid. Despite the photograph’s documentary nature, her inclusion of shots from the plastic surgery has a surreal and perhaps uncanny effect as the remaining images are staged. This oscillation between the abstract and the real and lack of context demonstrates Boiron’s intention – concentrating on the “feeling” aspect of the medium rather than what it represents.

Boiron’s approach to the body is close to what Maurice Merleau-Ponty describes in the ‘Phenomenology of Perception’ (1945): “My body is not only an object among all objects, … but an object which is sensitive to all the rest, which reverberates to all sounds, vibrates to all colours, and provides words with their primordial significance through the way in which it receives them.” 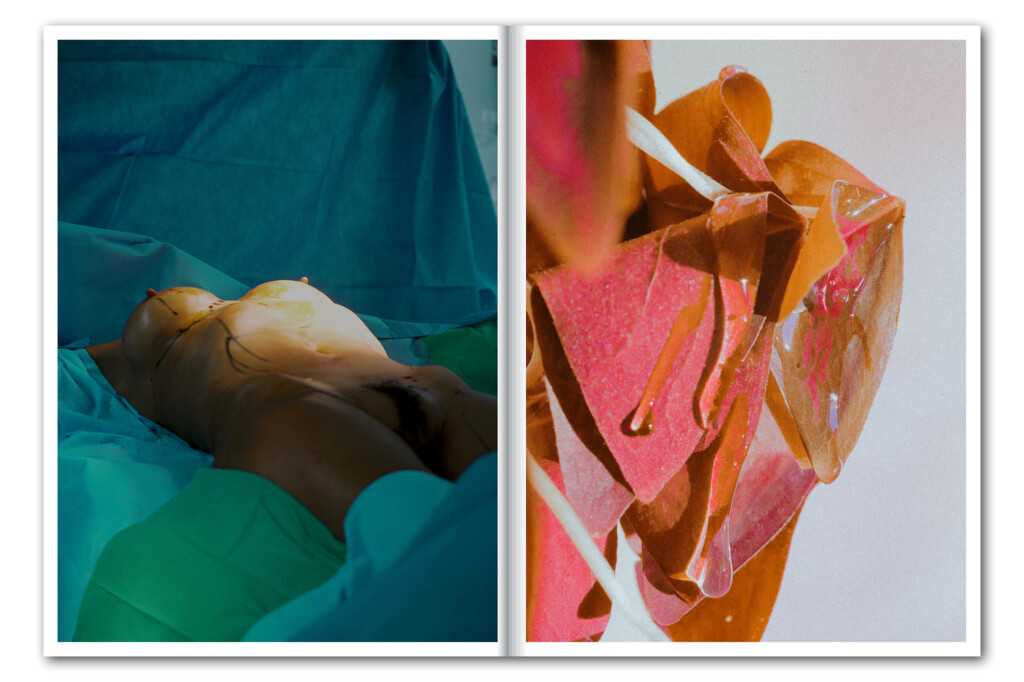 Her self-portraiture provides fragments both of herself but also of her experience witnessing a real-life surgery in the operating room. In a sense, she re-created this encounter more abstractly and metaphorically. There is a kind of symbiosis between the imagery – the images taken during the surgery influence the artist and the visceral still lifes echo back to the traces of her body. Through the method of dissection, we also get a glimpse of voyeurism, yet that of an unidentified body.

As the title ‘Mise en Pièces’ suggests, translated as ‘Breaking into Pieces’, the author adopts a zoom-in strategy – that of going underneath the surface. By exploring the flesh and the skin up close, we start to break free from seeing the body as we know it, we begin to focus on the materiality and possibly ambiguity of our physiques stripped off cultural meanings. 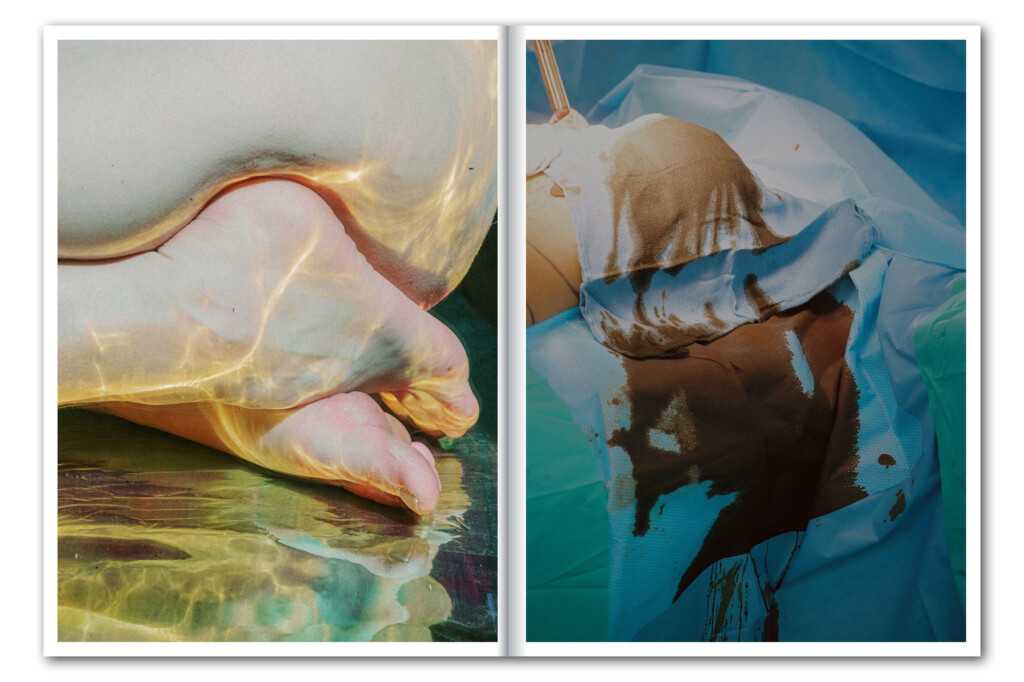 Lucile Boiron is an alumnus from ENS Louis-Lumière. In 2019, she was awarded the Libraryman Award, leading to the release of her first monograph – ‘Womb’ which was later showcased during Printed Matter’s Art Book Fair in New York City and then exhibited at the Henie Onstad Kunstenter. In 2020, the publication was nominated for the author’s book award at The Rencontres d’Arles. In her oeuvre, she delves into colours and sculpting of the flesh to question the biological truth of the body.