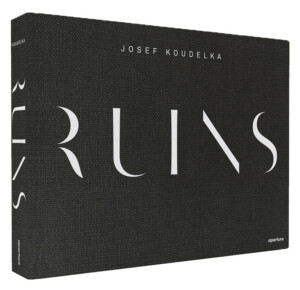 Long-standing Magnum member Josef Koudelka (b. 1938, Czech Republic) comes with a new monograph: ‘Ruins’ (published by Thames & Hudson) – a grand overview of Koudelka’s photographs captured throughout the Mediterranean in the span of twenty-eight years. While visiting places such as Italy, Greece, Libya and Syria, he managed to photograph more than two hundred archaeological sites. His signature large-format panorama photographs portray locations such as Petra, Pompeii and Delphii in a state of transformation and destruction caused both by the forces of nature and human actions.

The many texts inside this volume that accompany Koudelka’s images all hint on the complexity of ruins and their historical significance among various cultures.

‘Ruins’ opens with a foreword by Laurence Engel, the president of Bibliothèque nationale de France (BnF) and continues with numerous essays. The one written by Héloïse Conésa, a curator in charge of the photography collection at the Bnf, provides a historical insight into the iconography of ruins in relation to Koudelka’s imagery – particularly how it differs from traditional representations.

On the other hand, Bernard Latarjet, a president of the Centres culturels de rencontre, offers his account on how he met and formed a friendship with Koudelka when assigning him to photograph French landscapes for the DATAR project. Lastly, Alain Schnapp, an emeritus professor of Greek archaeology at Sorbonne University in Paris, places ruins within the historical context of ancient civilizations, discussing their universal nature, changing definitions, and their powerful presence.

Koudelka does not photograph the ruins in a picturesque or romantic way. He shows them as ambivalent and shattered entities that mirror the passage of time. His characteristic use of the panorama format gives way to observe a borderless open space. One would expect this technique to facilitate a feeling of freedom when observing the images, however, Koudelka’s composition-making blocks the skies and horizon with columns or foliage and this rather creates a claustrophobic tension.

Koudelka’s play with light and shadow in addition to composition escapes the mere illustration of reality. The instability of the seen and unseen stimulates a fragmentary vision where the ruin becomes an allegory of the world. By occasionally inserting his vertical panoramas horizontally in the book, Koudelka’s black and white photographs turn into an even higher level of estrangement.

‘Ruins’ is a monument of time and human civilization where the suspense between the remembered and the forgotten is in the centre. With this subjective point of view, Koudelka consequently points to our own frailty and the inescapability of death. The blend of past, present and future in his imagery helps us realize that one day, we will all be surrounded by ruins, especially, if human devastation continues.

‘Ruins’ was published in conjunction with a major exhibition at the Bibliothèque nationale de France that will be on show from 15 September – 16 December 2020. The publication is distributed in Europe and Australia by Thames & Hudson and the rest of the world by Aperture.