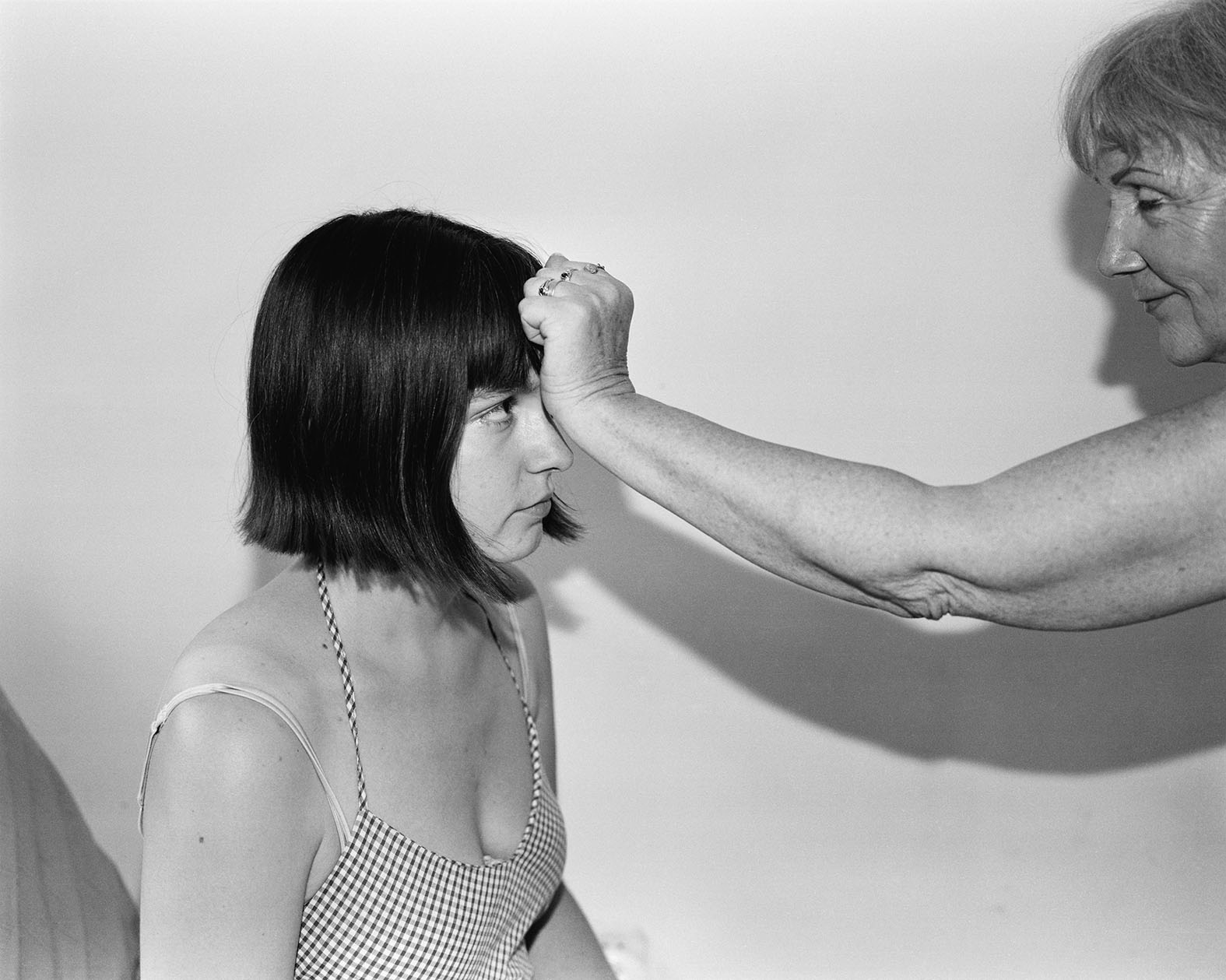 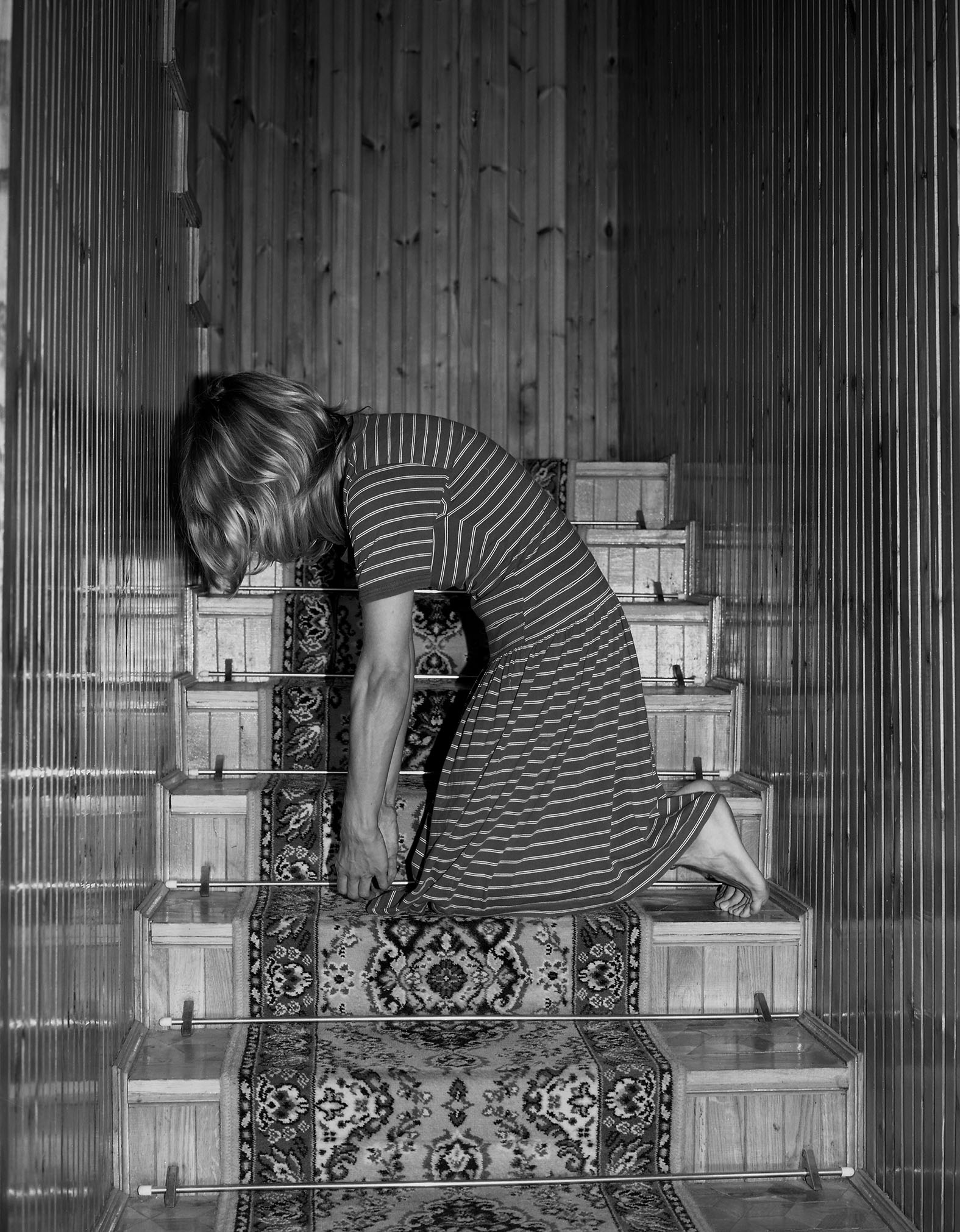 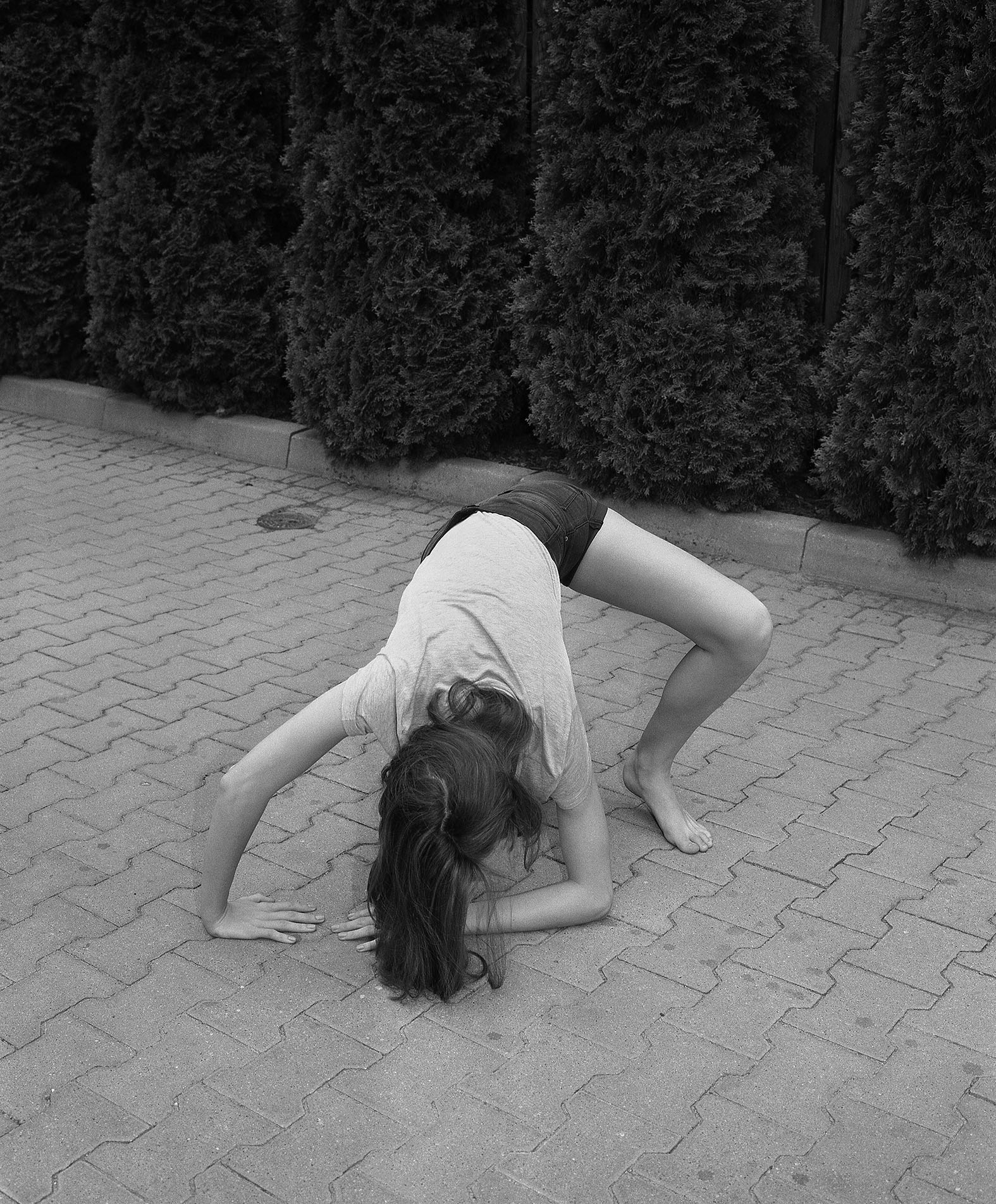 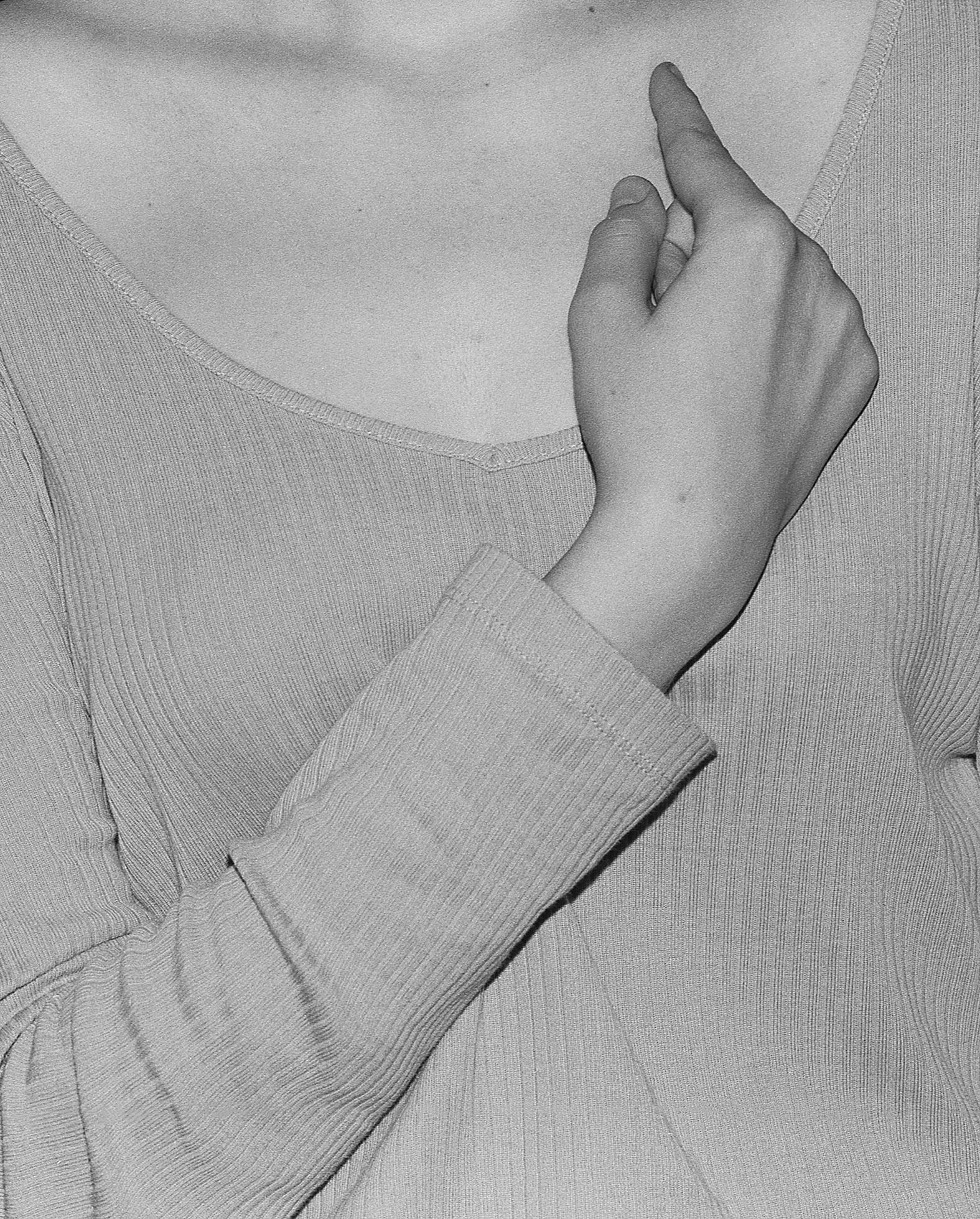 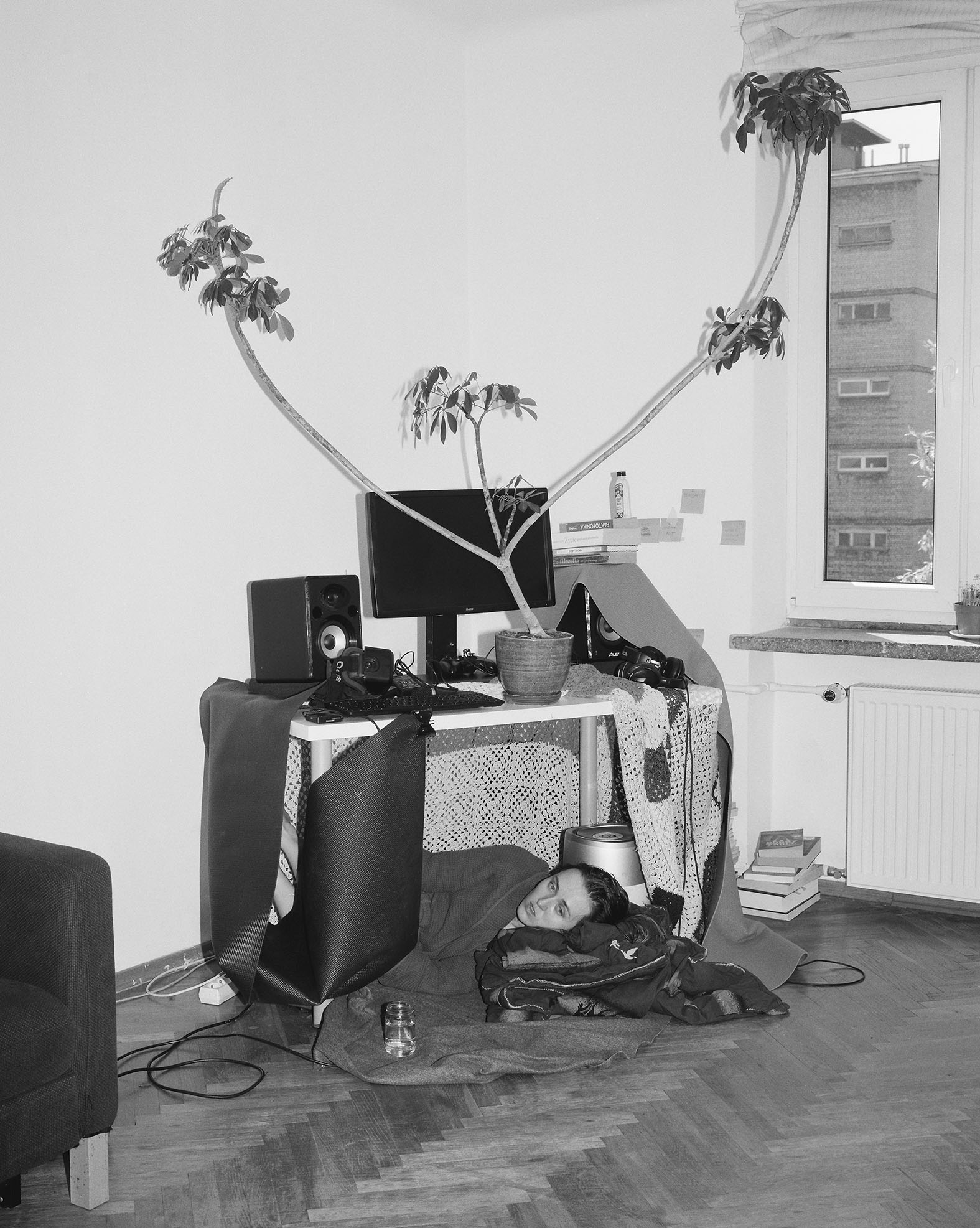 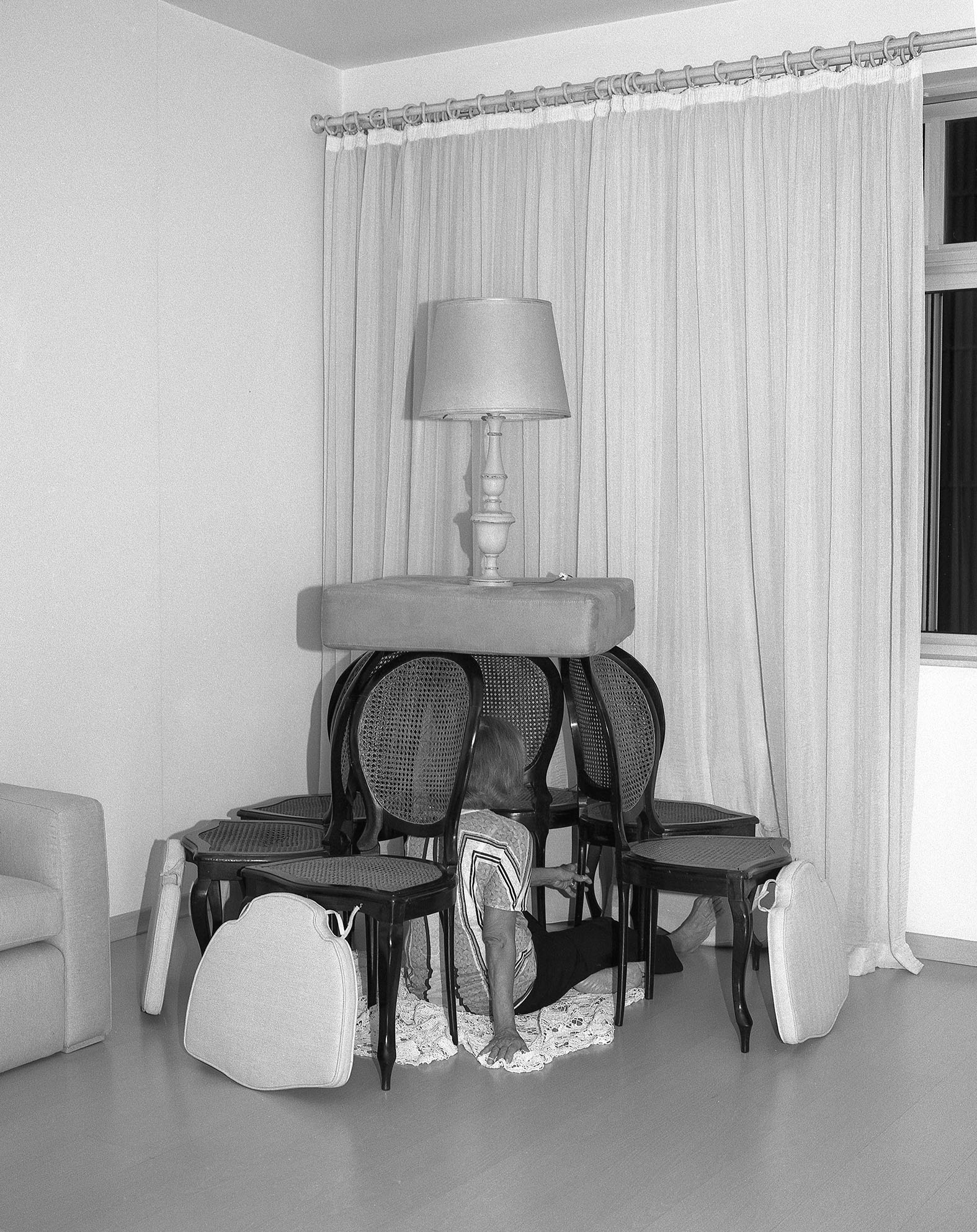 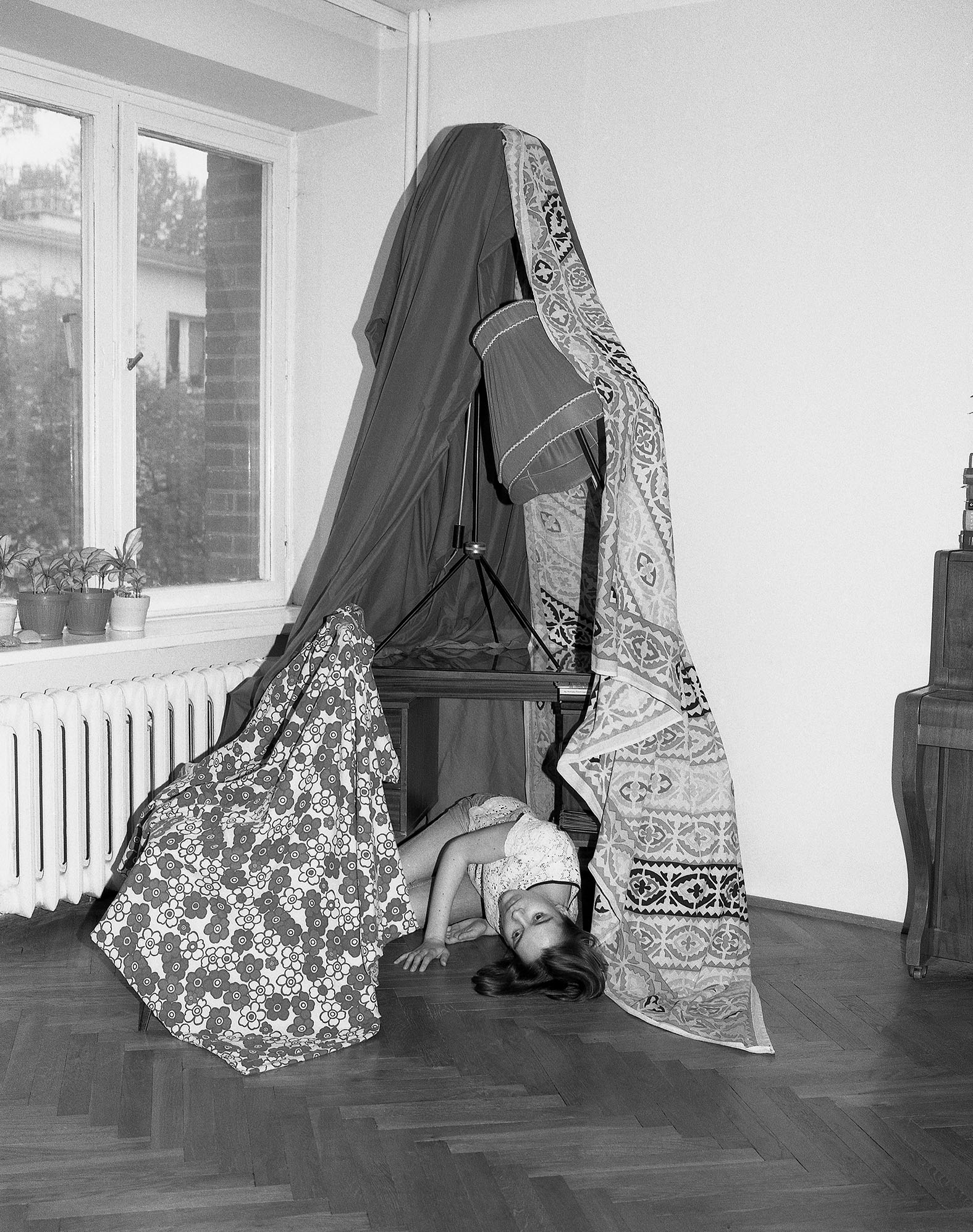 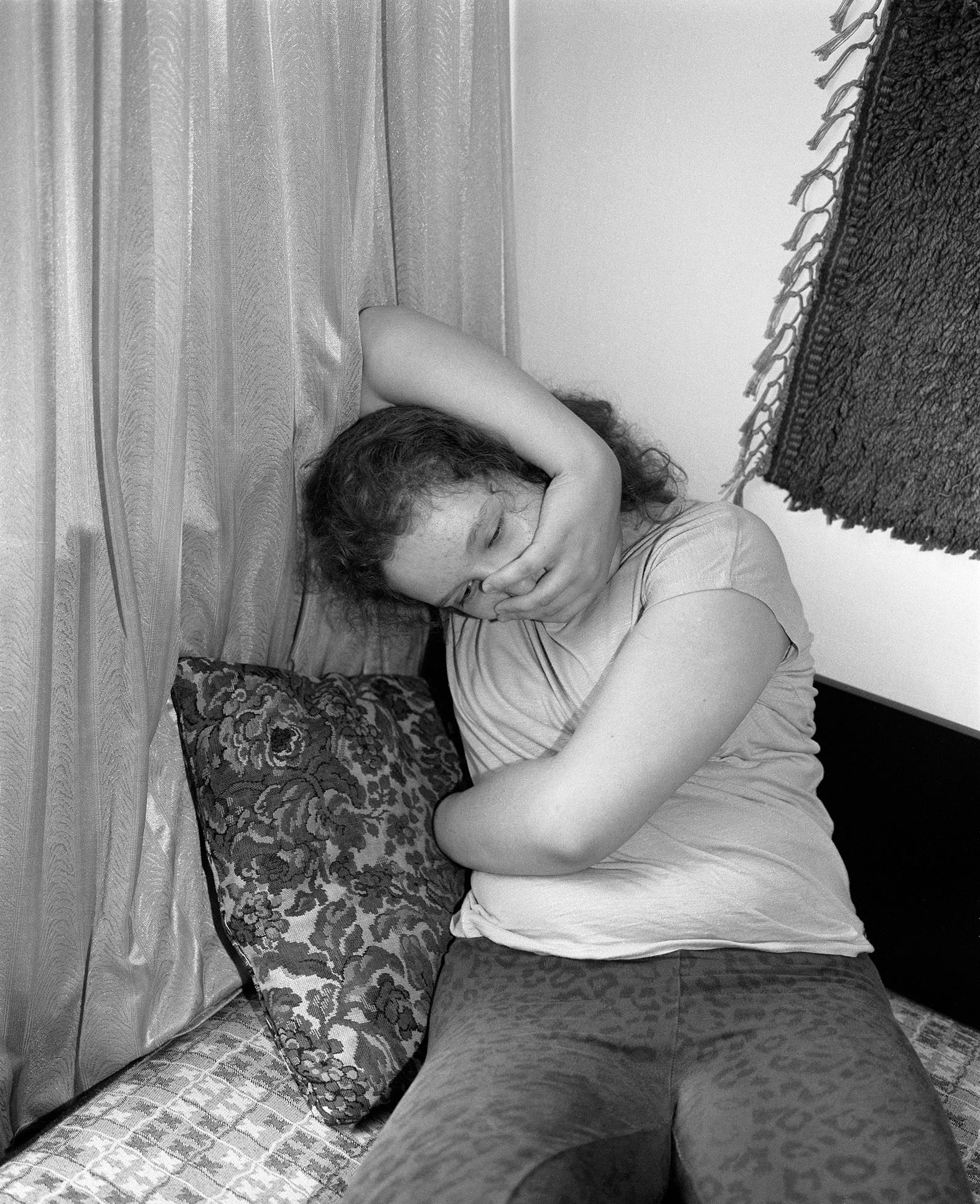 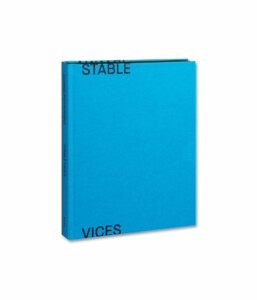 Polish artist Joanna Piotrowska (b. 1985) explores systems of power and potential forms of resistance through the medium of photography. In her latest photobook ‘Stable Vices’ (published with MACK) she showcases three photographic series, together reflecting on the themes of protection, freedom and oppression. The distinct bodies of work are accompanied by essays written by Sara de Chiara, Dorota Masłowska and Joanna Bednarek – texts which help to place the rather abstract photographs within a larger context.

When flipping the first pages of the book, one becomes immediately confronted with women in unnatural and twisted poses where their face is often obscured. Their gestures are odd and cryptic and only through Sara de Chiara’s text, we get to know that the women are re-enacting poses from self-defence manuals, yet the potential attacker is absent from the image, turning the captured choreography of their bodies into an uncanny and disorienting visual experience. 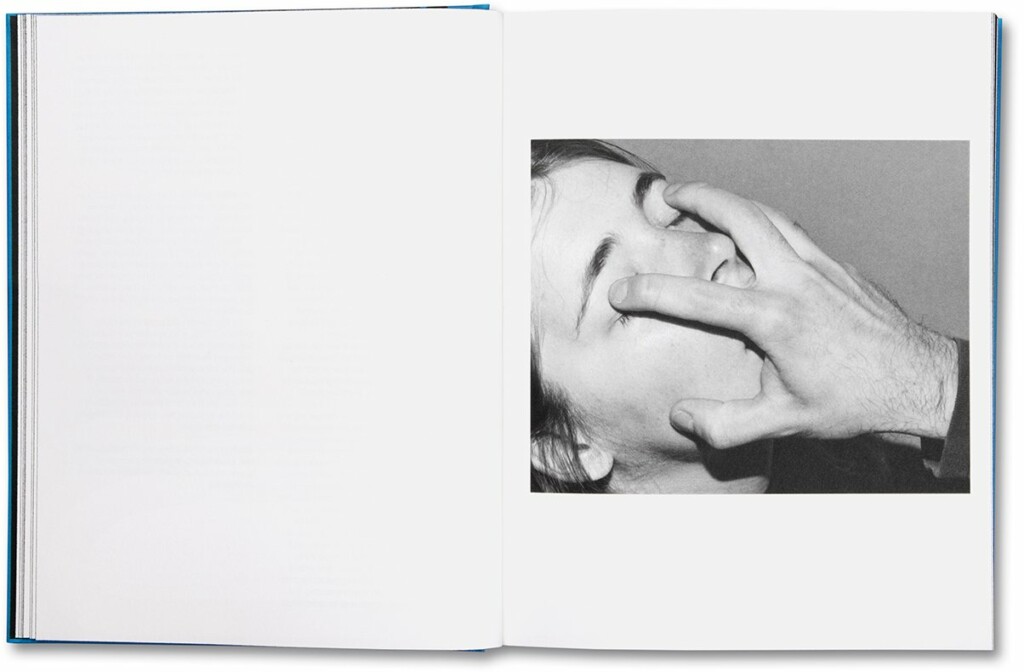 ‘Stable Vices’ is almost entirely composed of black and white images where in the first series, besides self-defence manuals, Piotrowska also draws inspiration from Carol Gilligan’s book Psychology and Resistance. “Structures of domination become invisible because they have been internalized, incorporated into the psyche, they appear not as manifestations of culture but as part of nature – part of us,” as Gilligan writes in her book. These exaggerated and performative gestures in Piotrowska’s photographs connote urgency to this invisible aggression. Subsequently, these reflexive postures additionally become an act of resistance through their attempt to tackle the unseen.

For the second series, Piotrowska invited people to create precarious shelters constructed from their furniture, cushions and blankets. She then photographed the adults lying or curled in awkward positions in their hide-outs. This set-up, usually associated with childhood games, turns into fragile and vulnerable protection from the existing home. As Masłowska questions in her accompanying text, “is it perhaps the fear of being consumed? Devoured by home, by its emptiness, silences, routines?” Although initially not intended as such, centred around the search for the meaning of our existence and attempts to mentally and physically escape, Piotrowska’s series has become strangely relatable after the collective experience of confinement caused by the outbreak of COVID-19… 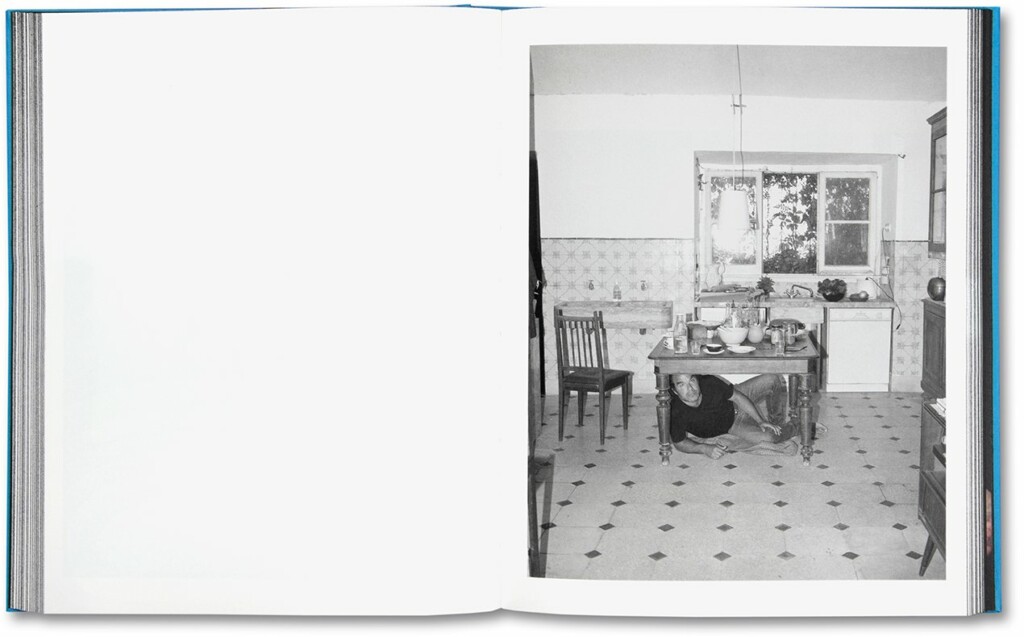 The third series in the book is composed of photographs of cages captured in Poznań Zoo, drawing a parallel between humans and animals where the space of a zoo is used as an analogy to the architecture of oppression. In her essay ‘Animals Beyond the Forest’, Bednarek explains how animal’s escapes from zoos are “often portrayed as accidents, but in reality, they are expressions of intentional agency, of resistance, and thus their source is not a psychological disorder, but rather a moment of distinct clarity.”

Piotrowska’s photographs show cages that include toys and ropes and after witnessing her previous series, we start to see the similarity with our own domestic spaces. As highlighted by Bednarek, Piotrowska again adopts an anti-spectacle strategy by not including the animals in the frame which provides space for critical engagement with her imagery. The title is another subtle hint to what is being addressed: ‘Stable Vices’ refers to undesirable behaviour of horses caused by a confinement in a stable that is caused by hunger and not having enough exercise – the days fuelled with boredom. Consequently, horses are then hard to manage and often destroy the facilities by kicking or chewing. 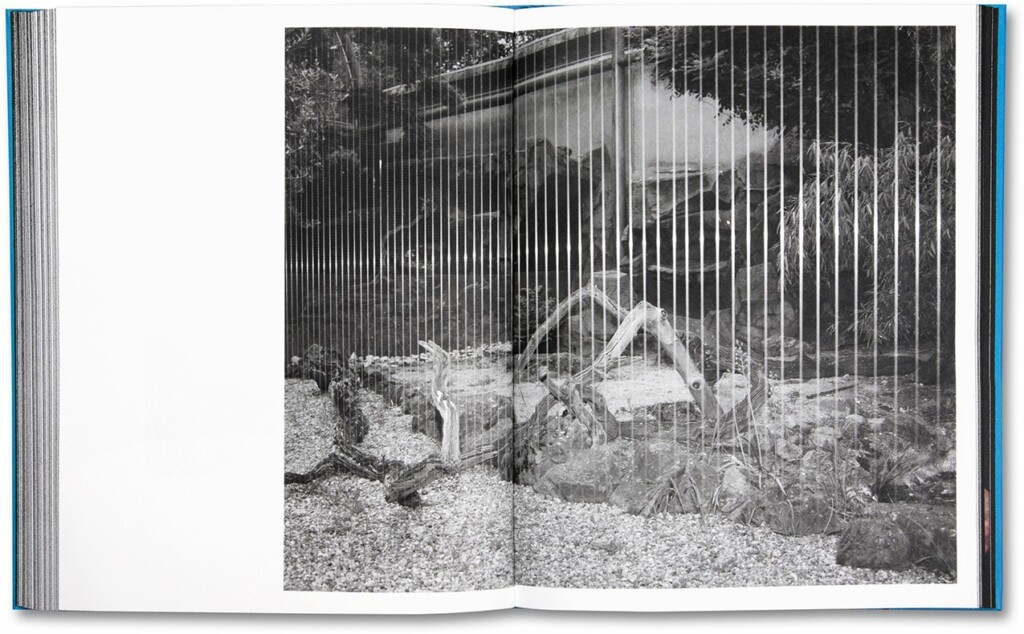 ‘Stable Vices’, the book, contains an extensive collection of Piotrowska’s oeuvre created over the past years and it can be considered as a metaphor for humans and their behaviour when subdued. French philosopher and cultural theorist Michel Foucault once famously proclaimed: “where there is power, there is resistance.” This quote is particularly relevant for this body of work. Through her clever play with visibility and invisibility, Piotrowska refuses to comply with the dominant notion of photography as based exclusively in the realm of the real. Instead, by pricking our minds, her photographs become subtle provocations of what we consider our reality.

Joanna Piotrowska is based both in London and Warsaw. In her oeuvre, she focuses on familiar structures and womanhood in relation to systems of power structuring the existing hierarchies we currently live in, particularly, those of politics, economics and culture. The current and upcoming exhibitions of her work can be seen at Insel Hombroich Foundation (April 2021), Thomas Zander Gallery (April 2021) and Tate Britain (May 2021).

If you are interested in more bodies of work related to performance, you can explore our print issue GUP #67 which is purely dedicated to this theme.