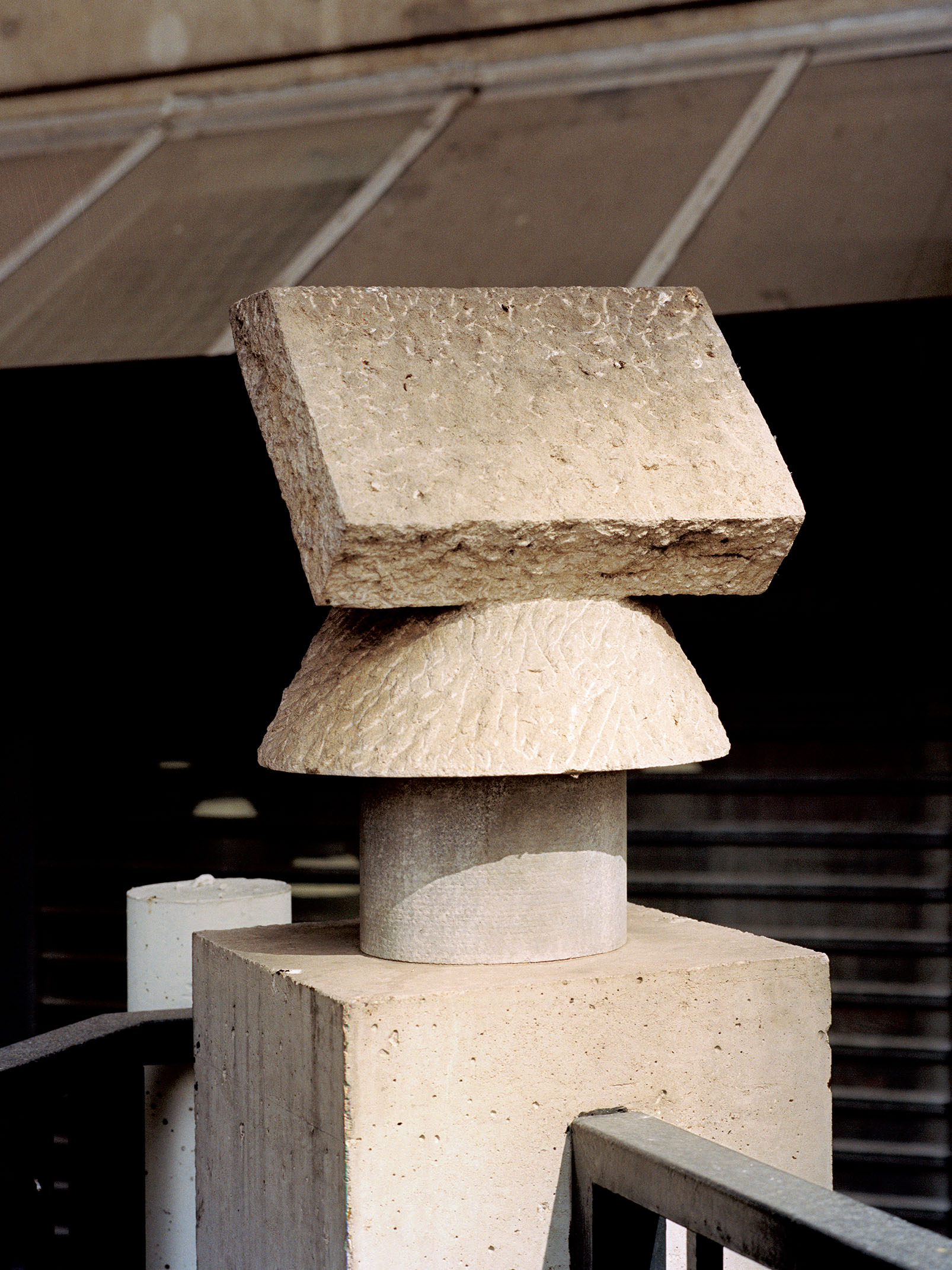 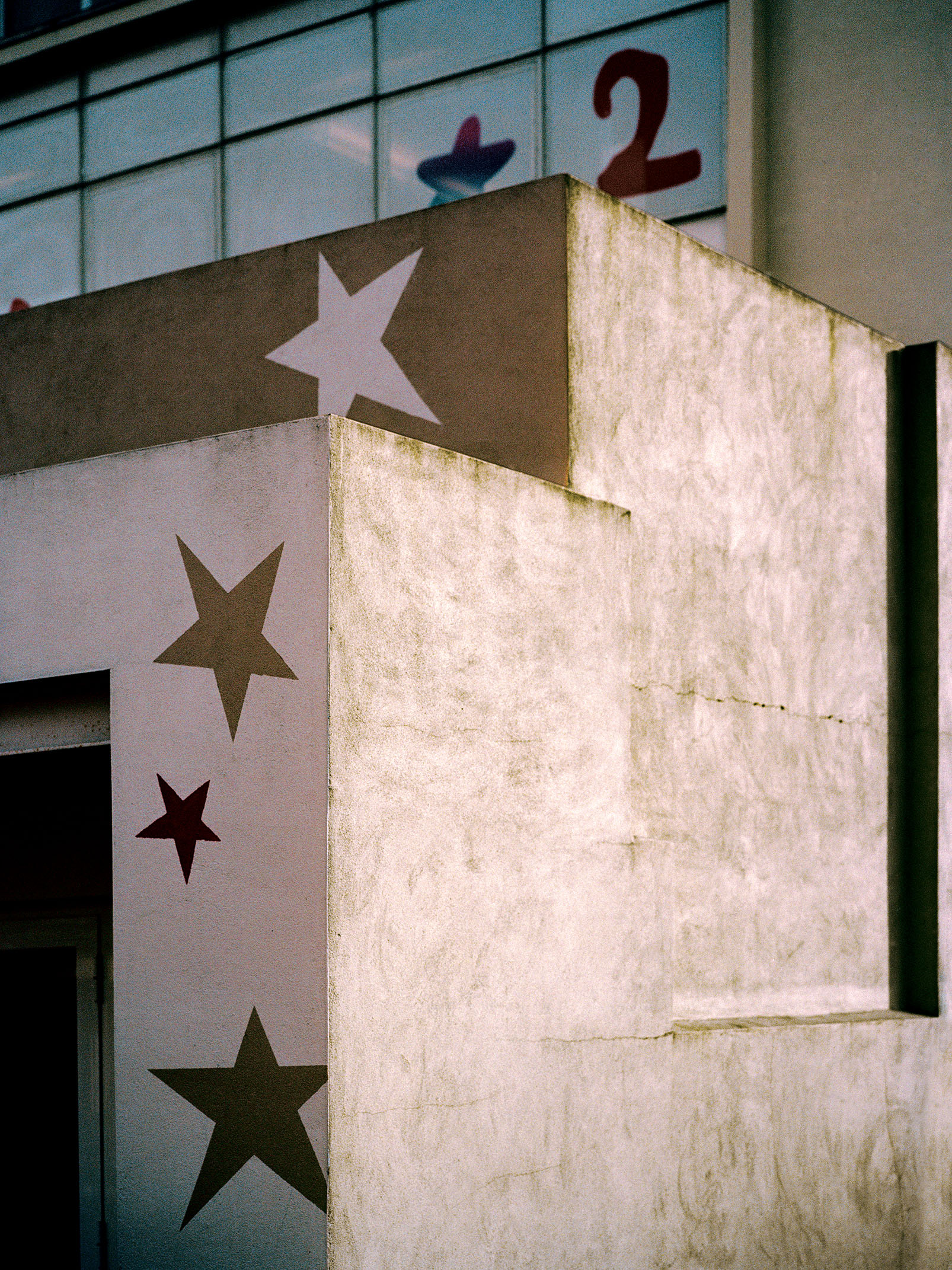 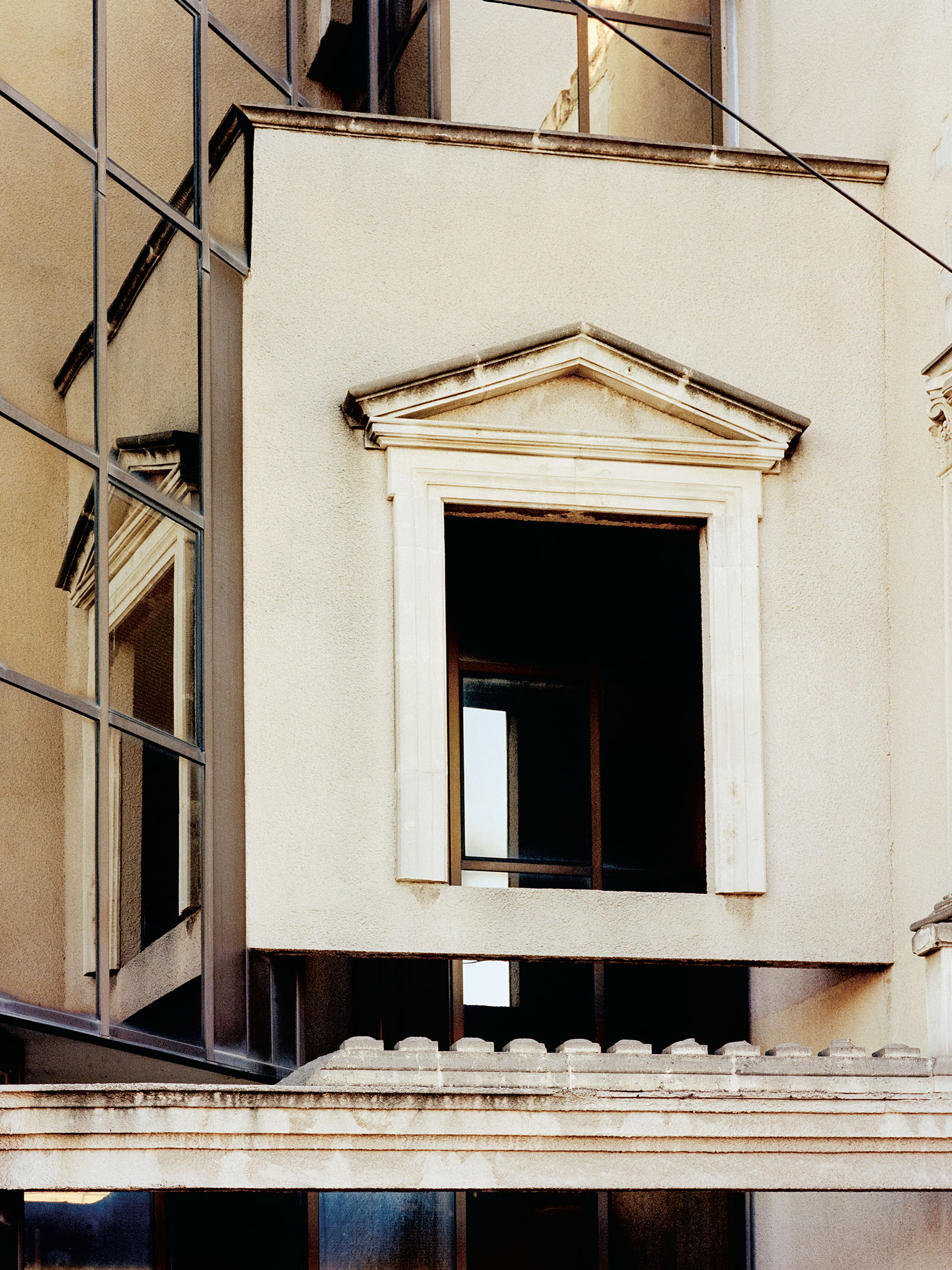 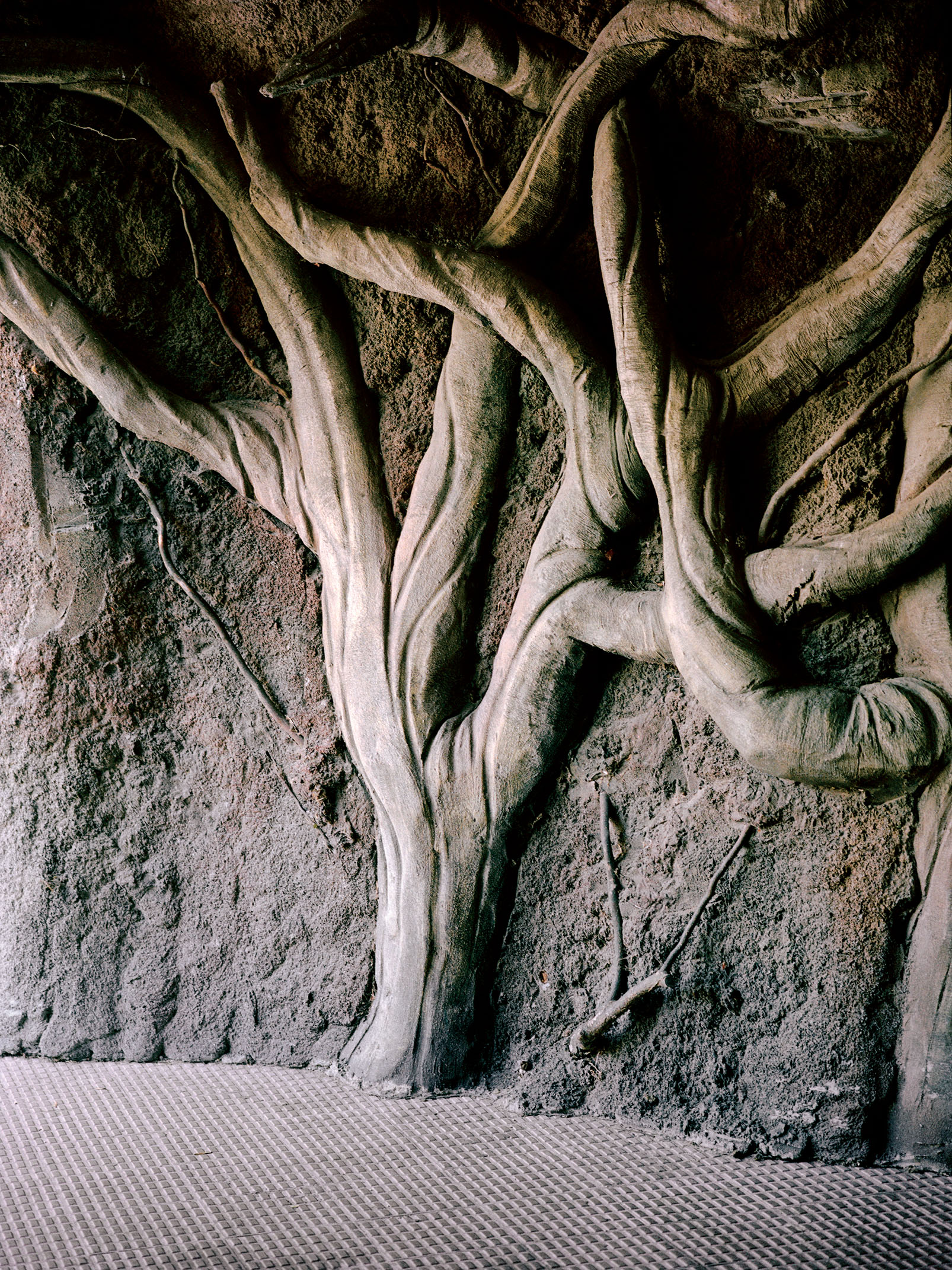 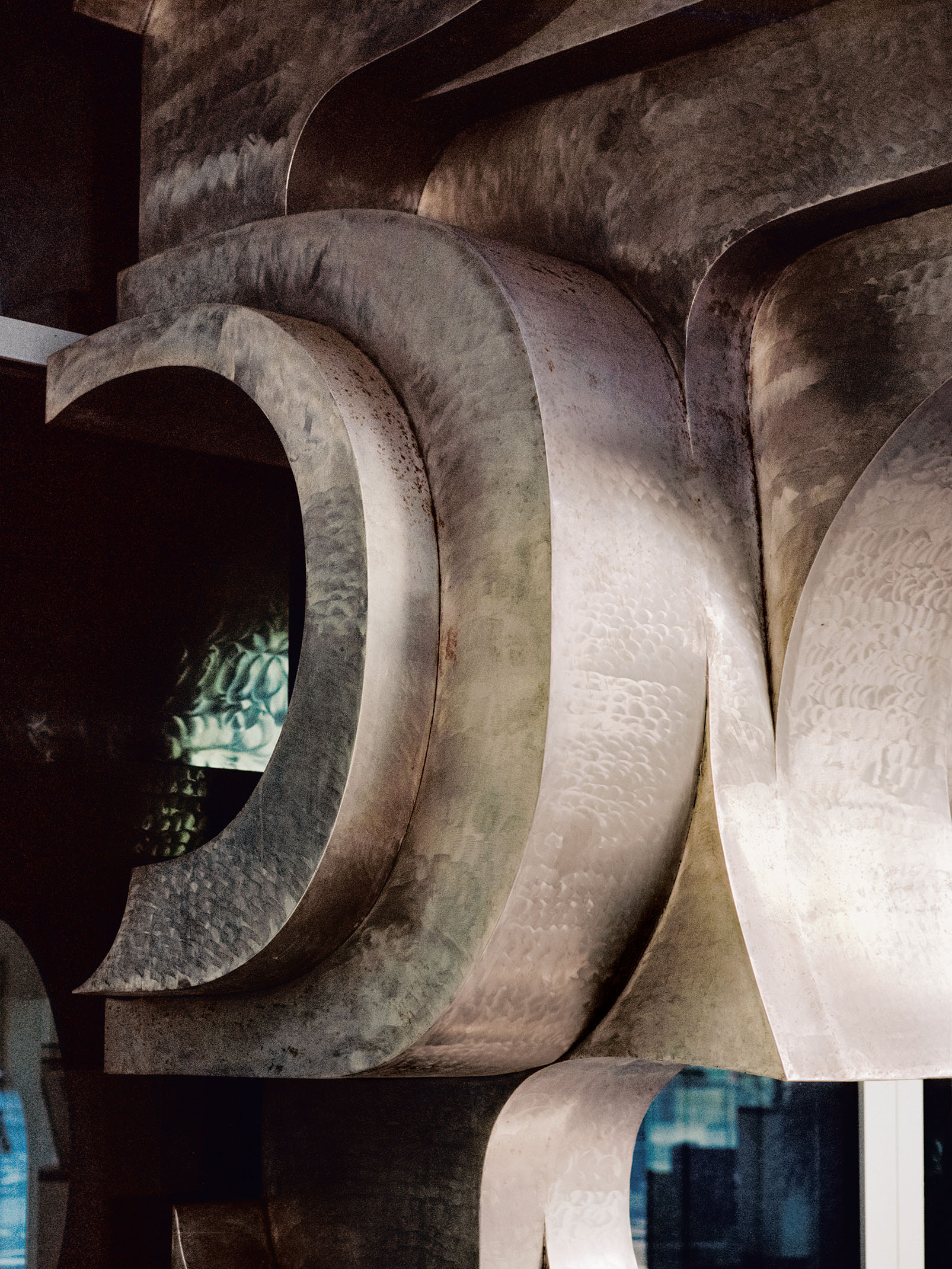 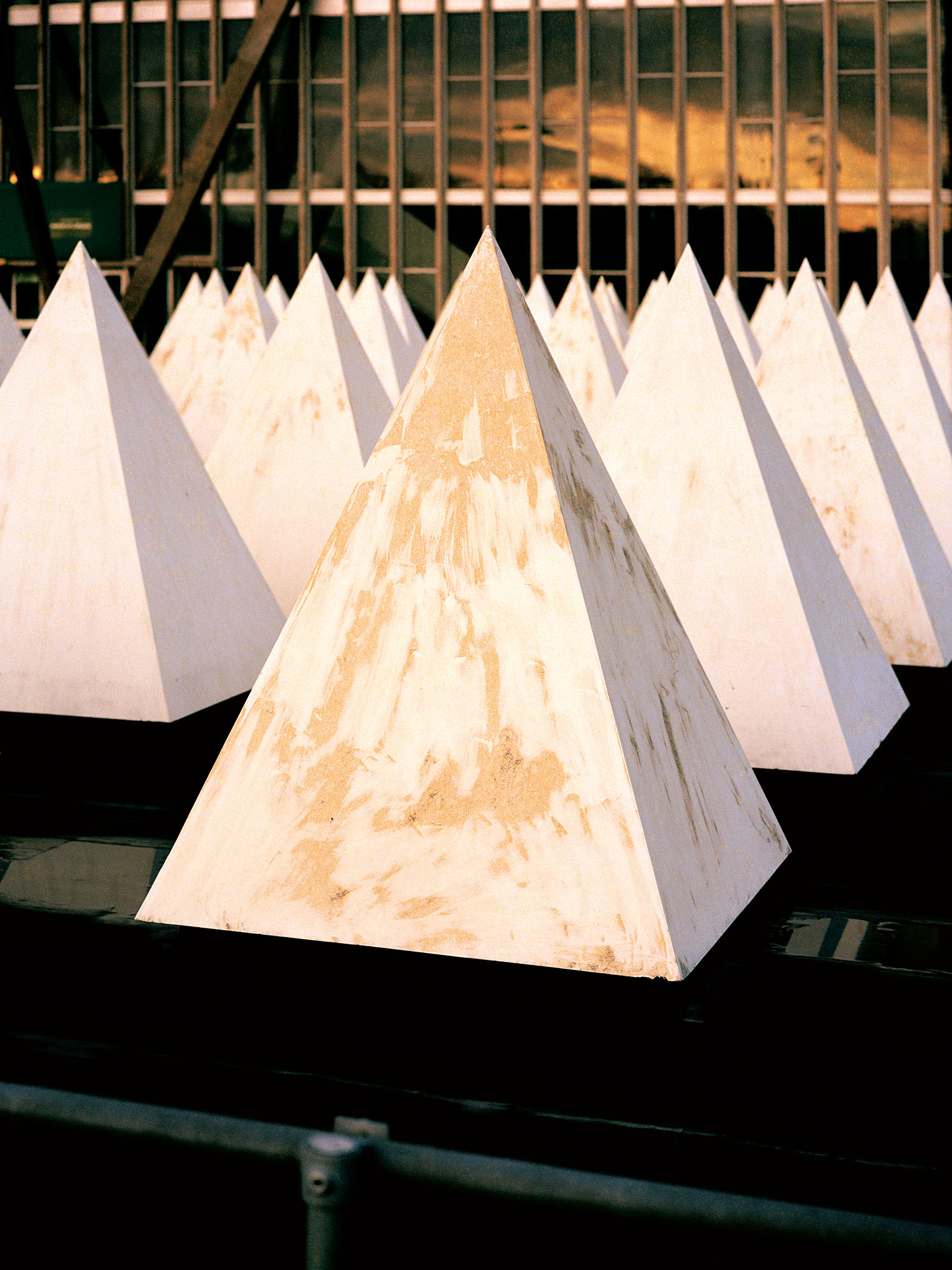 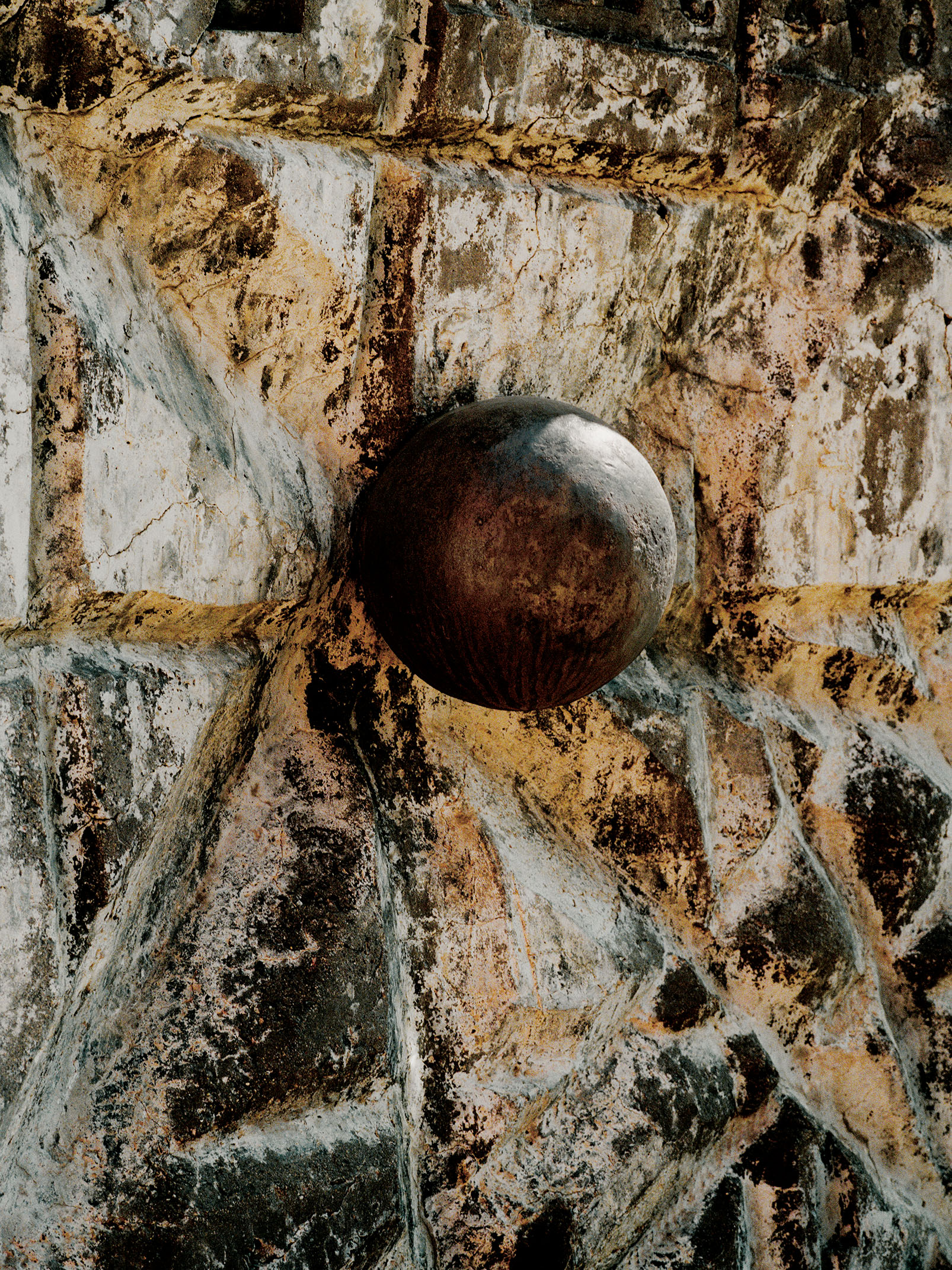 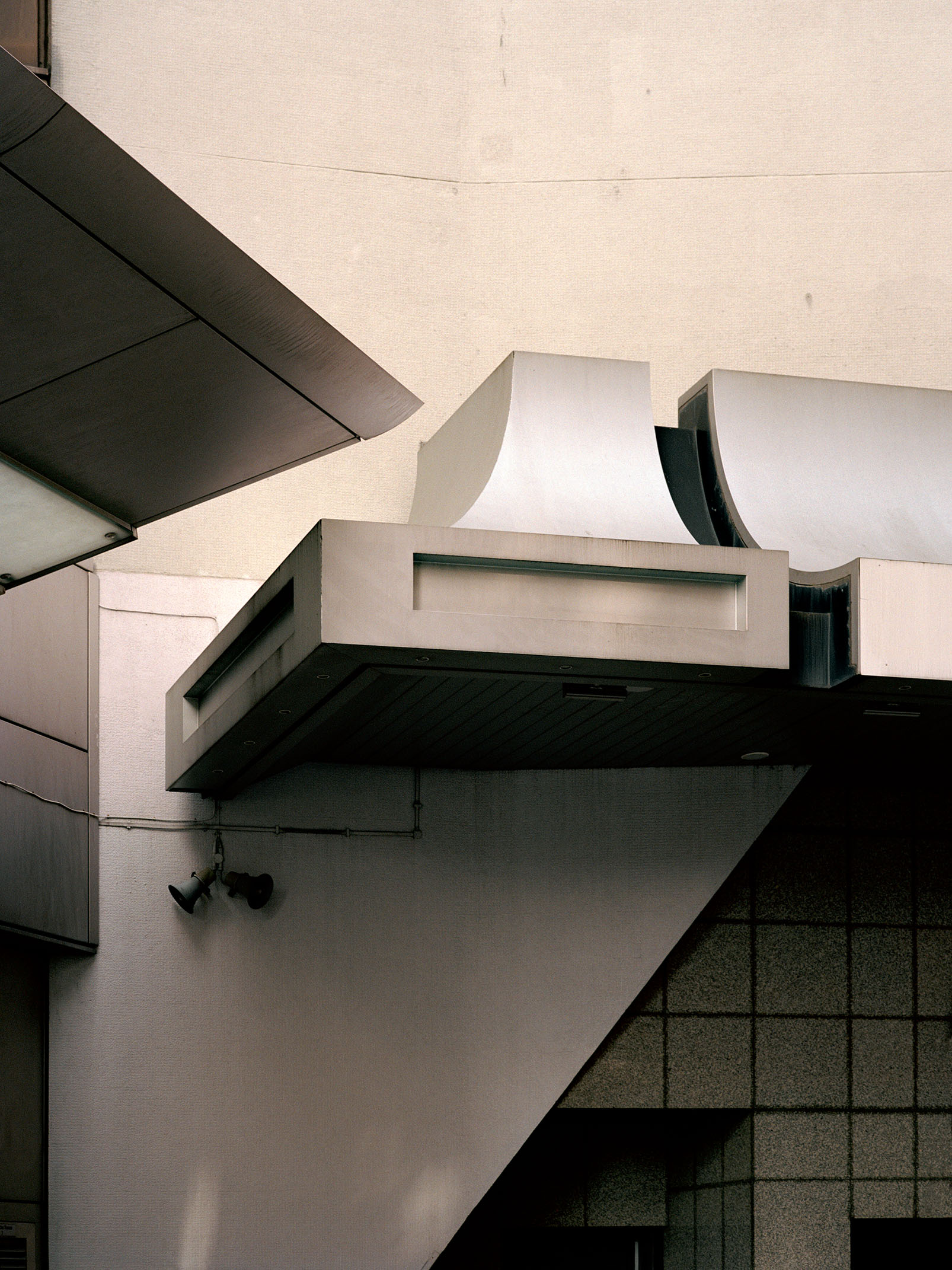 For Double Orbit, Gregoire Pujade-Lauraine (1981, France) photographed buildings, from almost aggressively angular structures to curiously anthropomorphic, swirling concrete shapes. The strange architectural idiosyncrasies documented hide in plain sight on the peripheries of expansive Western metropolitan cities, in secret passageways and side streets, or under the shadow of acclaimed landmarks and grand architectural wonders.

In this self-designed and hand-crafted publication, with every image printed upon one singular sheet of paper, each image represents unique aspects of the increasingly complicated and layered landscape of our contemporary urban environment: ancient ruins often sit nonchalantly beside tourist coffeeshops, gothic buildings share walls with modern, reinforced concrete slabs, and for every freshly built office building or apartment high rise, another building, in another part of town, is falling into disuse, past its prime and its functional capacity.

These photographs, devoid of human interaction and intervention, reveal “the silent life of the world we have constructed for ourselves.” There is no hierarchy amongst the architectural features on display: each one is treated in the same manner, and with the same significance. Rather than a focus on the structural stance of building photography, this approach is rather more similar to that of the topographer, mapping out the contours and anomalies of the artificial terrain. The images never reveal the entire facade of the buildings — instead pinpointing individual elements, the forms recontextualized from functional components into sculptural remnants, each one revealing the quirks and singularities of the architect, the builder, or the bricklayer. 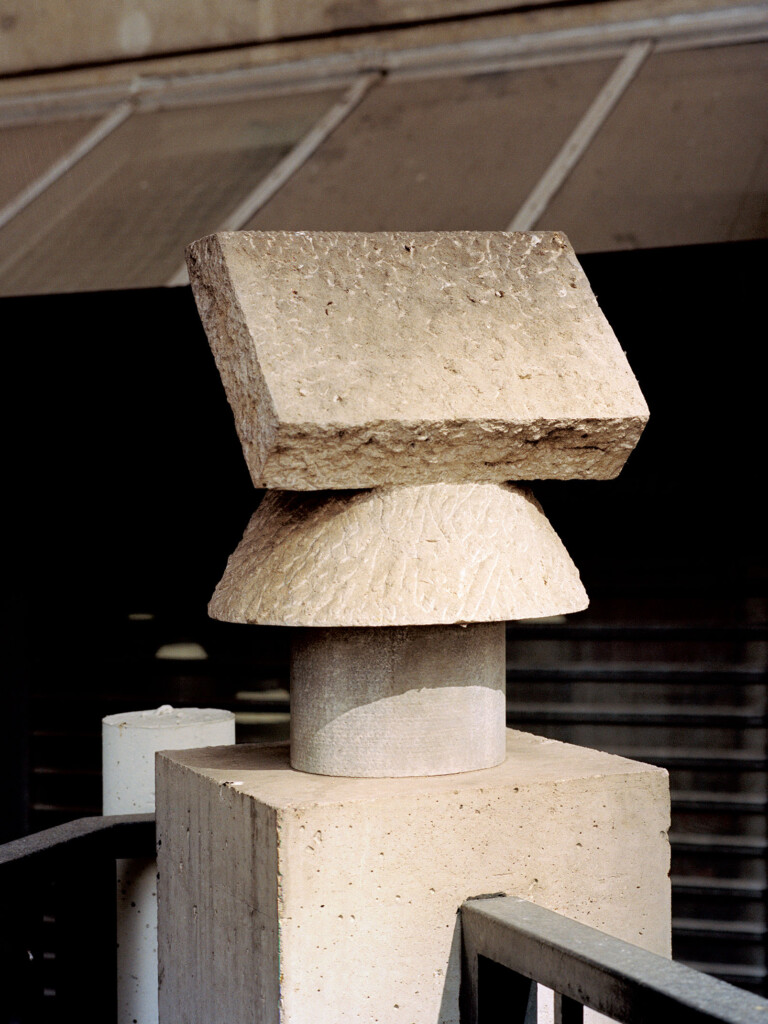 In isolating these elements, Pujade-Lauraine reinforces the speculative, curiosity-driven mindset of seeking out and documenting these often puzzling, enigmatic building features: what set of circumstances, or delineation of ideas, would prompt an architect to adorn a flight of stairs with stacked geometric shapes that, in Pujade-Lauraine’s eyes, evoke the early, dome-footed iMacs, for example? Or, as in a photograph taken at a Spanish zoo — why would one go to the effort of sculpting an artificial tree in concrete, with its twisting branches snaking up the surface of an artificial cave wall, when a real one would do?

Allusions to nature are rarely, if ever, seen in these pictures. The man-made environment dominates, to the extent that in the one image of ‘nature’ that is included, the central tree — which one can only assume is still alive — has been besieged by concrete on all sides, its roots no longer even visible under the layer of latticework that bounds and imprisons it to the ground.

As human presence is conspicuously absent, the purely functional quality of these structures built to shelter us, or house yet more things that we have built, is relegated to the background. Pujade-Lauraine displays a preference for architectural features with no utilitarian function at all: the seemingly arbitrary ornaments that adorn facades and roofs, extraneous structures added for little more than aesthetics.

One of the photographs in ‘Double Orbit’, of a grid of tarnished white concrete pyramids, is one such example of the seemingly redundant features often seen in public architecture — yet the simplicity of the chosen shapes, and their repetition, suggest a capacity for containing symbolic gestures from the architect himself. Like an ulterior, hidden motive. The photograph here mentioned was taken at a swimming pool complex that now sits where the former Crystal Palace used to st and, which was a plate glass and cast iron structure originally built to house the Great Exhibition of 1851. Seen at the time as a glowing symbol of architectural advances, it burned to the ground one evening in 1936 (and was said to have attracted thousands of spectators, who mourned its destruction). The fire later came to be seen as highly symbolic of the end of King Edward VIII’s brief, controversial reign. 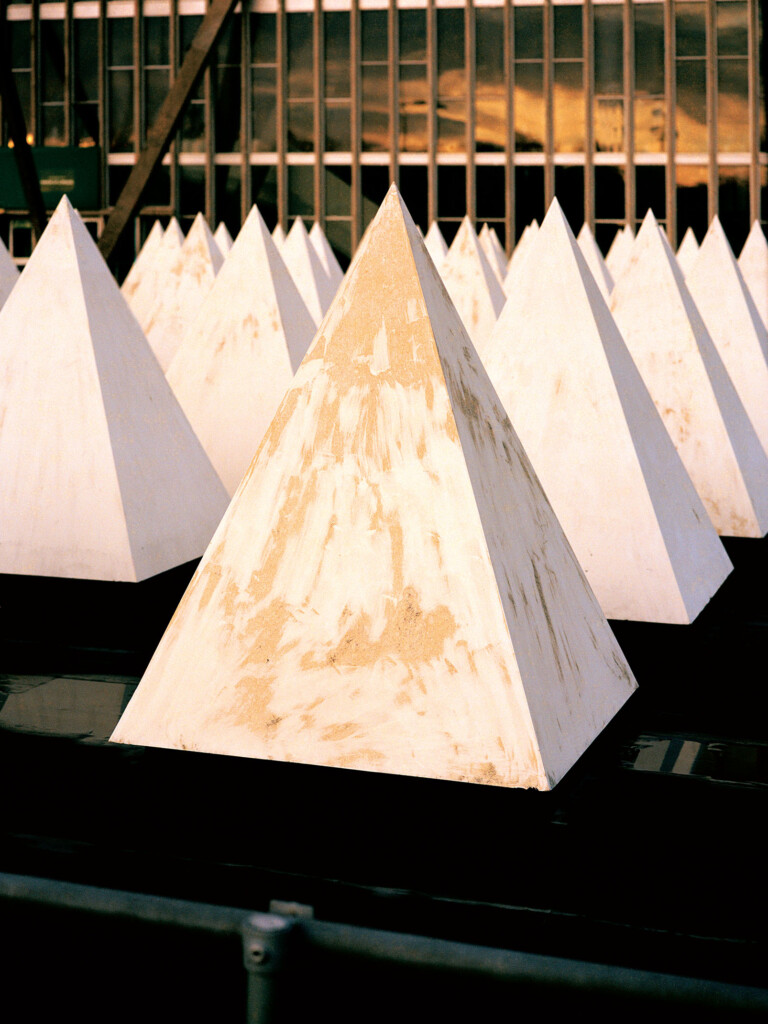 There is a symbolic resonance from this anecdote, within many of the buildings we pass in our daily lives. Such is society’s deep entanglement with the manmade structures that dominate our landscape, that their creation and destruction can move far beyond the physical and into the spiritual, becoming distinct emblems of our times.

The recognizable stylistic qualities of Brutalist architecture also appear throughout Pujade-Lauraine’s project, symbols of a rebellion against the nostalgia of 1940s architecture. It is a nostalgia that is not dead in contemporary times, as is evidenced by former United States president Donald Trump’s (meanwhile revoked) executive order in December of 2020, stating that all newly built federal buildings must be, according to him, “beautiful”, and preferably built in a Classical style fit for the American people.

The stark, straightforward nature of 20th century Brutalist architecture reacted strongly against the artifice of imitation Classical buildings and their ornamental stylings, favoring bare reinforced concrete and a modular aesthetic seen by many as eyesores upon the urban landscape. One dominant argument against Brutalist buildings is that they do not “age well” — not gracefully, but with the visible weaknesses of concrete: crumbling, streaked with water stains and rust, its decay too explicit to be beautiful. Pujade-Lauraine’s images revel in this decay, displaying their cracks and chipped paint proudly.

In the end, who decides the parameters of beautiful architecture?

It seems illogical to argue that the often touted “cold” nature of Brutalist buildings is an innate, instinctive feeling, or that one cannot find beauty in the distinctly mundane. As Pujade-Lauraine demonstrates, there is beauty and enigma to be found in the simplest of structures, if one is willing to search for them in the labyrinthine passageways of our ever-growing metropolises.

All photographs courtesty of the artist and MACK Books. Gregoire Pujade-Lauraine is a French visual artist and photographer. Double Orbit, and his previous publication A Perpetual Season, are both available at MACK Books.