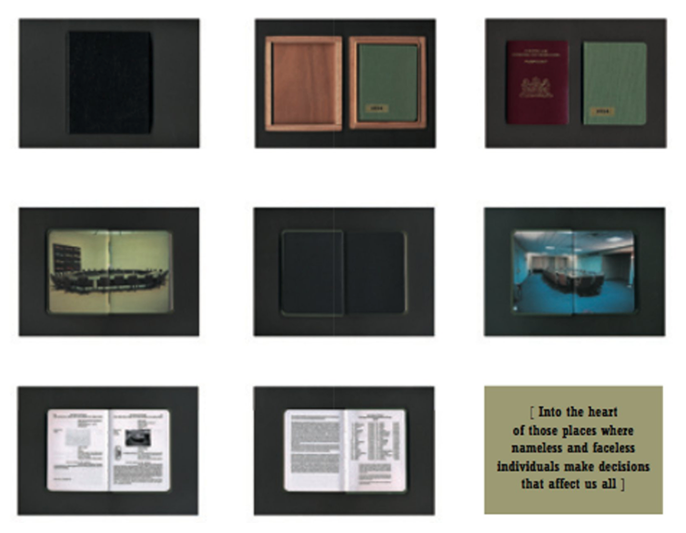 Born in the Netherlands, Jacqueline Hassink (1966) has mapped the economic globalization of our society in a precise, almost scientific way in a mixture of documentary photgraphy and conceptual art.

In her first project, The Table of Power (1993-95), Hassink photographed the boardroom tables of Europe’s forty largest multinational corporations. The tables were photographed devoid of people. Participating multinationals were asked to fill in a questionnaire about these tables, and the artist supplemented these with drawings of the table settings and information about the corporations. The project therefore consisted not only of impeccable photographs of the tables in question, but also information about the enterprises, such a turnover figures and the industrial sector in which the companies operate. Hassink’s photos of boardroom tables bring us into the heart of those places where nameless and faceless individuals make decisions that affect us all. They are places of prestige and consequence, all of which are reinforced by the high- quality furniture, often valuable and custom-made.

Black page
Using Fortune magazine’s list of the 500 most important companies in the world, Hassink approached Europe’s top 40. Only 21 of them agreed to have their boardroom tables photographed. The 19 that denied access received a double-spread, black page with a footnote explaining their refusal. The pages pose the provocative question of what they have to hide there. The book was published in passport format, symbolic of Hassink’s access into the world of major industrial multinationals. Table of Power prompted Female Power Stations: Queen Bees, a project which looks at more than just corporate boardroom tables, but stays within the realm of powerful decision-making. Here Hassink’s research is framed by gender. She contacted women who chair large corporate boards and proceeded to photograph their boardroom tables at work, as well as their dining tables at home. In photographic diptychs, she placed rooms where the mores of power rule next to rooms domi- nated by the social codes of the private domain. Queen Bees in turn led to another project, entitled Mindscapes, in which Hassink investigats the boundaries between the private and public domain in both Japan and the United States. She uses relatively small but extremely telling examples of personal identity in the corporate world. To convey the complexity of the subject, Mindscapes consists of six projects: 100 CEOs-10 Rooms, Personal Coffee Cups, Cubicles, Training Center for Salary Men, The Shoe Project and VIP Fitting Rooms.