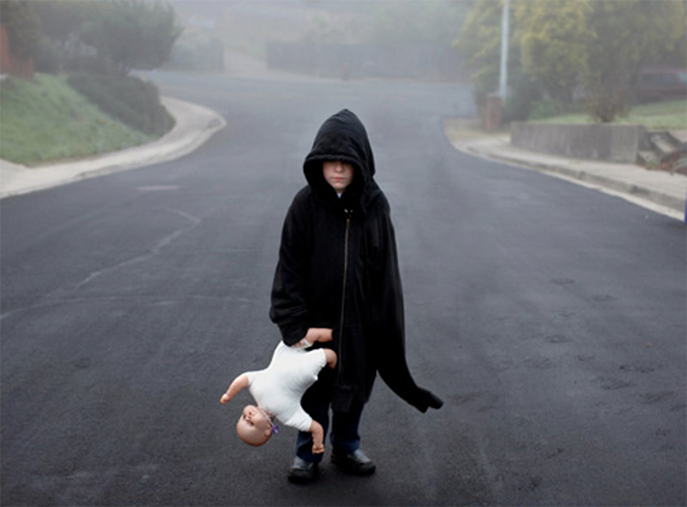 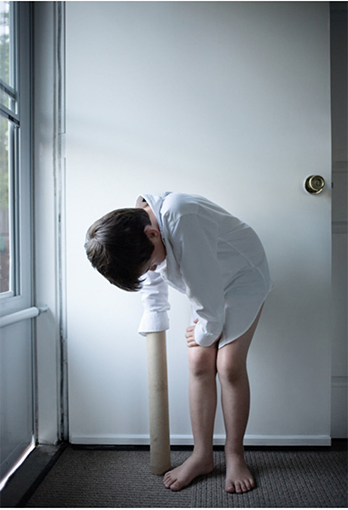 You’ve been photographing your son, Elijah since he was 5 years old. Since then you have found out that he is on the autistic spectrum. How have the images changed or evolved with this discovery?

‘When I first started photographing Eli, we already knew something was up…something was different with him and the way he engaged with the world. The term “ Autistic Spectrum” and all of that never came into it. But he was different, he saw the world differently than I did, was in it in a way that was curious to me. Those differences are the things that made me want to explore him, or more accurately, to explore “the me and him relationship”, with the camera. That was the key for me: it wasn’t really just pictures of a beautiful child, but images about the relationship between he and I and the great unknown at the time. The relationship had the layers and the tension and having the great unknown…this thing I couldn’t understand, that gave us the fuel for the project. The kid…oh, he was just the innocent one’.

This is a very personal series, a collaboration between you and your son. What made you decide to make it public as well as release it as a book?

‘For me, the power of having experiences is the sharing of the experience. It can help others navigate their own situations, it can be cathartic to share on my end, it can open doors and shut doors too. So, you gotta share this creative stuff I always feel. My previous book (Sex Machines: Photographs And Interviews, Process 2005) was like social anthropology- really looking into other’s lives with distanced observation. I wanted to do something less literal, more beautiful, more personal, but with some emotional weight for people to carry with them. As this body of work started to form it seemed like I could do all those things with it. I’ve always liked what a book can do for a story that has an arc: you can have a beginning, middle, end, work with the pairings, all those book nerd things that come into play, I love those things. But also, I thought a book, it’s in a home, it’s kinda private, it would probably end up on someone’s kitchen table….very domestic, like the project was. It’s not larger than life on the walls of a gallery’.

How often do these photo sessions take place and how long do they usually last?

‘In the beginning, his attention span was so very short, the images would be done in less than 10 minutes…and you get what you get…just very feral photography. As the project evolved and he got older and more involved, we started using film with a Hasselblad on a tripod with Polaroid tests and such, so those shoots could extend up to 45 minutes or so. But time aside, I can’t really accurately describe the intense personal focus Eli was able to have for these photoshoots. Subtle body movements and gestures under masterful control and utter focus and the operating of the Hasselblad camera and backs and dark slide insertion and every ritual nailed down and locked into place. Very intense focus on his part…and I would just kind of sit back with wonder’.

Do you decide beforehand what to photograph or does the inspiration come organically?

‘The photographs …well the good ones, all evolved organically. He would do something, act a certain way, do something with his body and I’d grab onto it. We’d then try to set aside time to do that in a place that had nice light, a simple location, someplace special and intentional. The results were always different from what we wanted to do, there was so very often a surprise we just embraced. There were of course times that I’d think I had an idea that I’d want to pursue, and it really almost always failed and looked so self-conscious…so obvious that this professional photographer was trying to mess up the shot, you know? Just very transparent. Early on a friend looked at the project and said “ you know, you need to stop driving the photographs…let him lead and you’ll get what you are looking for”. He couldn’t have given me better advice’.

Do you see this as an ongoing project?

‘It’s most definitely not an ongoing project. I never wanted to be one of these Dads who photographed a kid over the entire arc of the kid’s life. It’s just not that interesting to me to see the passage of time. To me, this “Echolilia channel” that the photographs were made during, really captures this time when I was really trying to look at the evidence in my kid and my life and figure out this mystery, try to understand this child that I just had a hard time harmonizing with. I thought we both felt like we were digging and mining this situation together to try to figure it out…or figure something out. And in the end, we didn’t get any answers…..but amidst it all, we built a bridge. Now we’ve met in the middle of the bridge and there is just no need to make these images any more’.