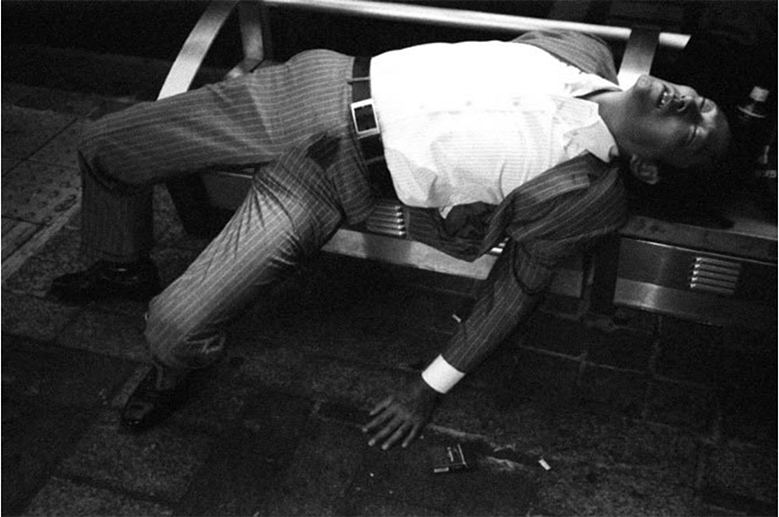 The goal is to die

“Karoshi” is a Japanese word meaning “death from overwork”. The major medical causes of karoshi are heart attack and stroke due to stress, but you could also see it as an alternative way of suicide. Photographer Pawel Jaszczuk has spent months searching, at ungodly hours, for these hopeless leftovers after a night on a binge.

In Japan, due to the strict corporate hierarchy, many employees will be prepared to work unpaid overtime to an extreme extent particularly as their young co-workers will often quit when a job is too strenuous. After working overtime six days a week, the only relief for the corporate Juggernauts is to drink till they drop.

Polluted and unhealthy, characterized by dangerous class divisions and social tension, the metropolitan area is a space of degeneration and decadence, and at many levels embodies the ills of a society in crisis. In that sense, Pawel Jaszczuk fits a long tradition of photographers who turned their cameras on the extreme contrast in the human conditions of those living within the populous urban core.

Immensely scattered in ways of living but nevertheless vividly stuck together within a densely geographical concentration, the Japanese “karoshi” men – it is indeed pretty much restricted to a male gender issue, so far – are another example of those living the dark metropolitan live in broad daylight, defining the shades of urban space.