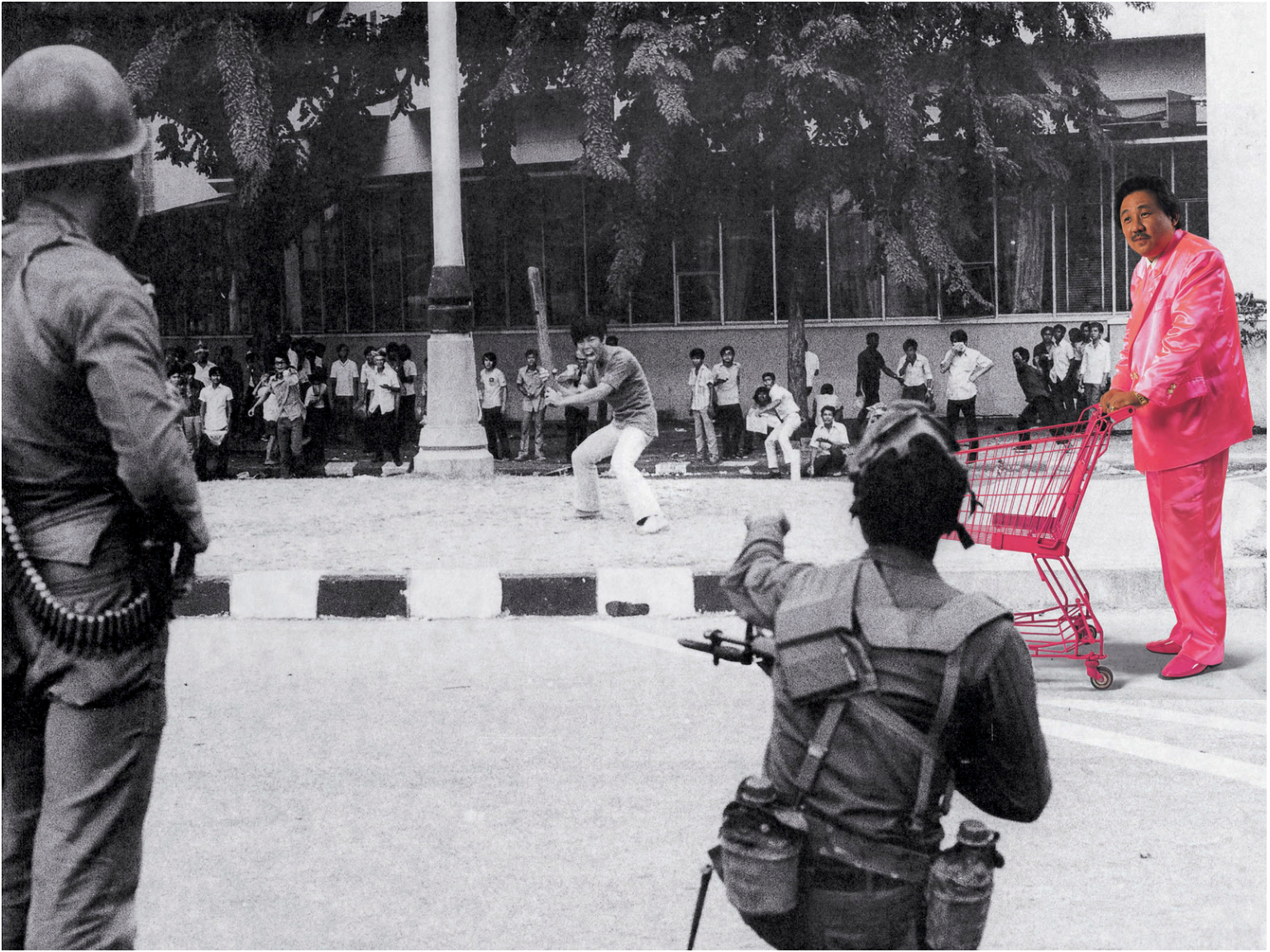 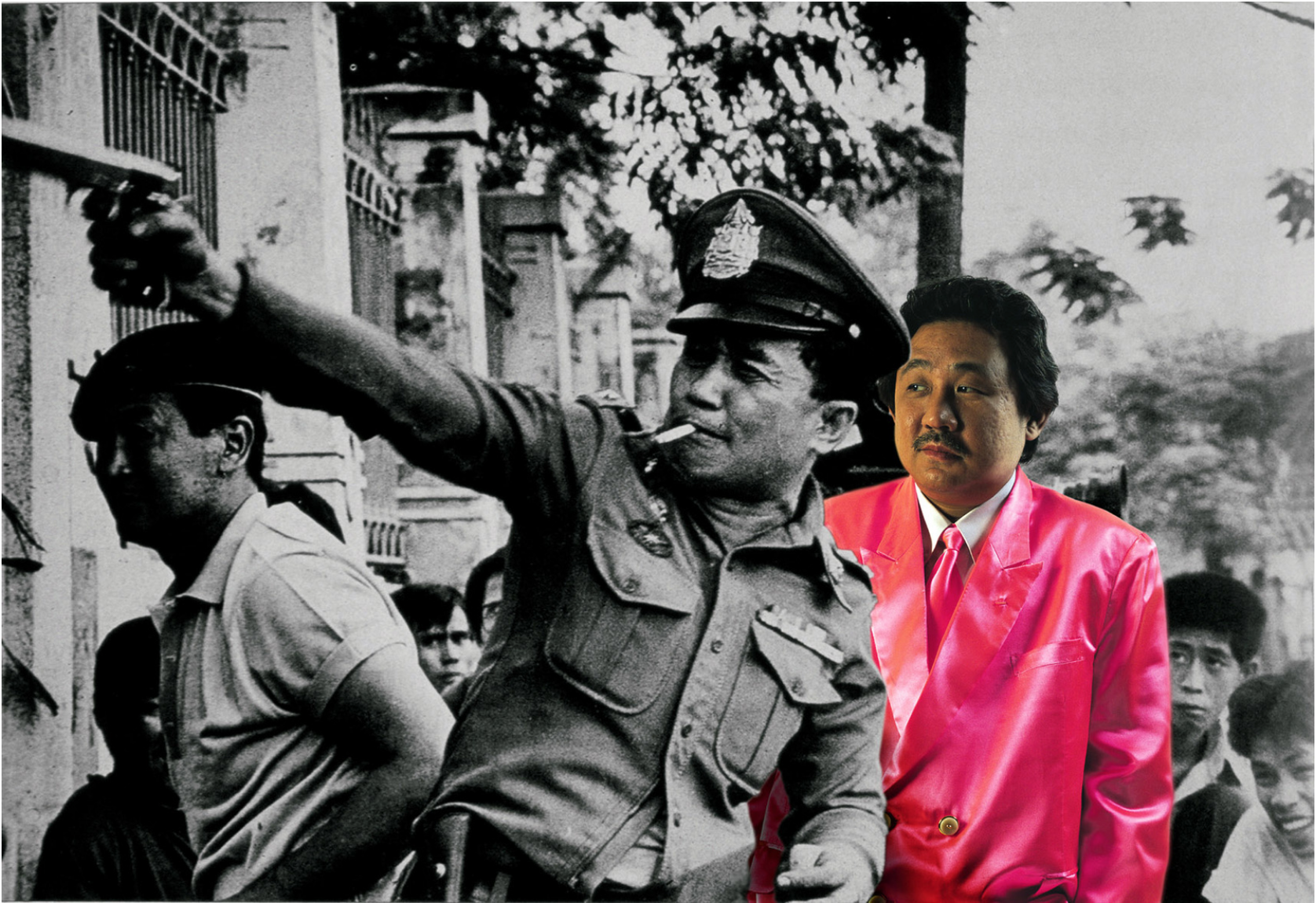 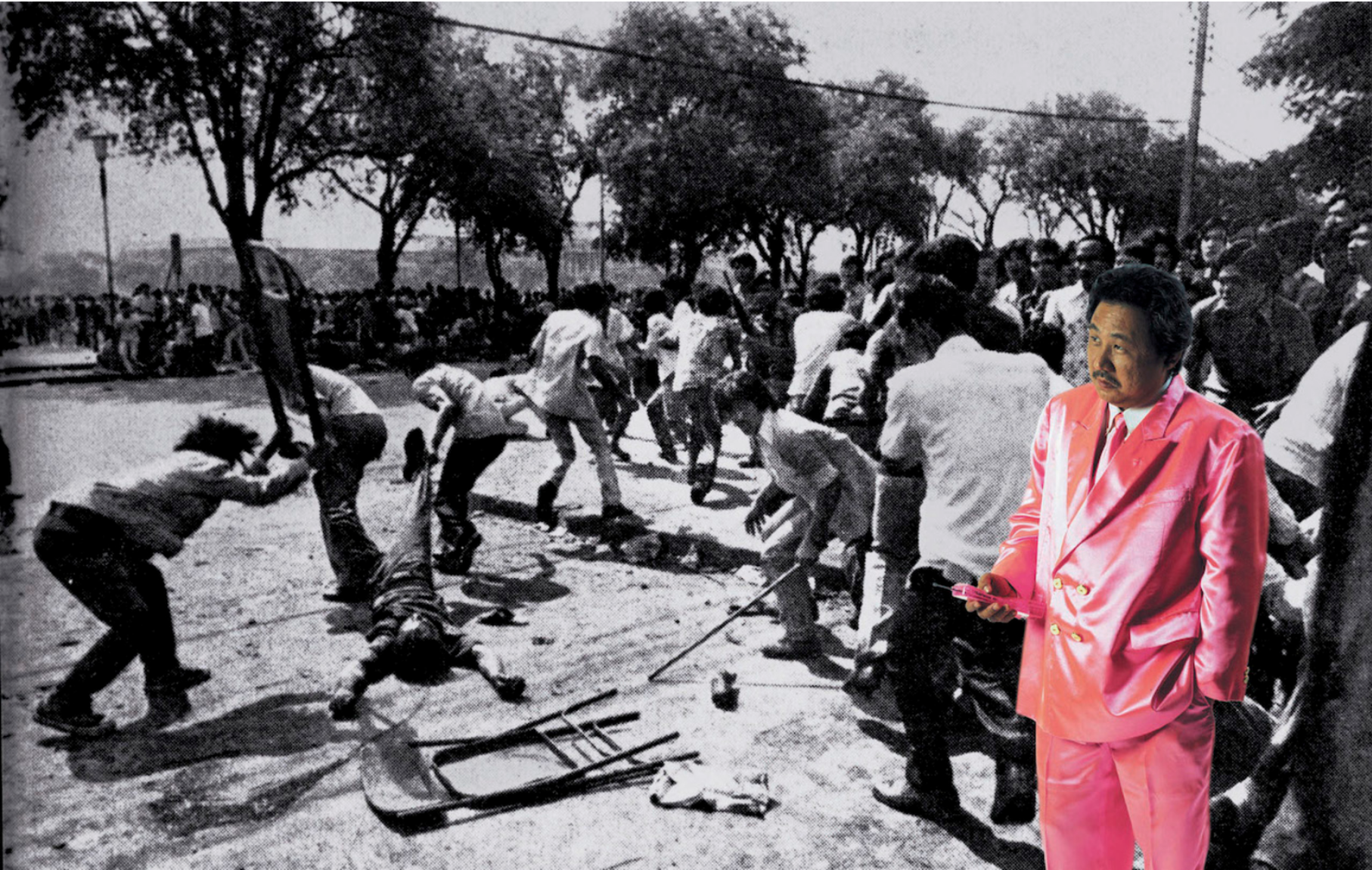 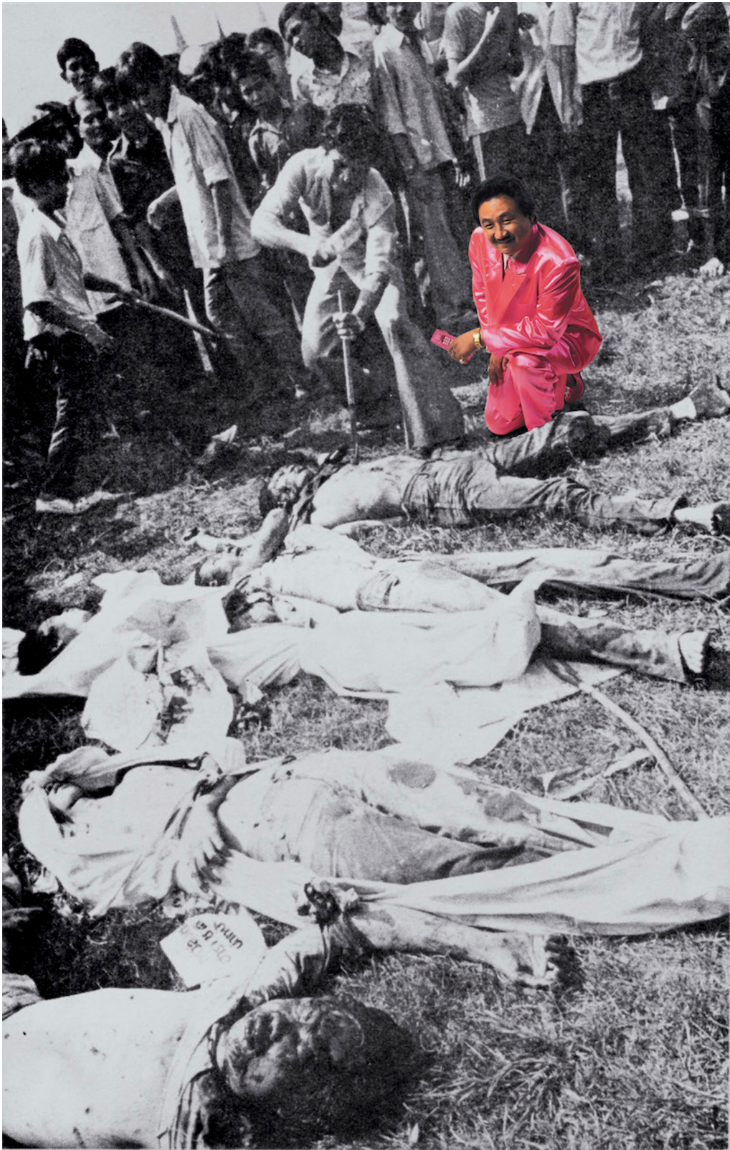 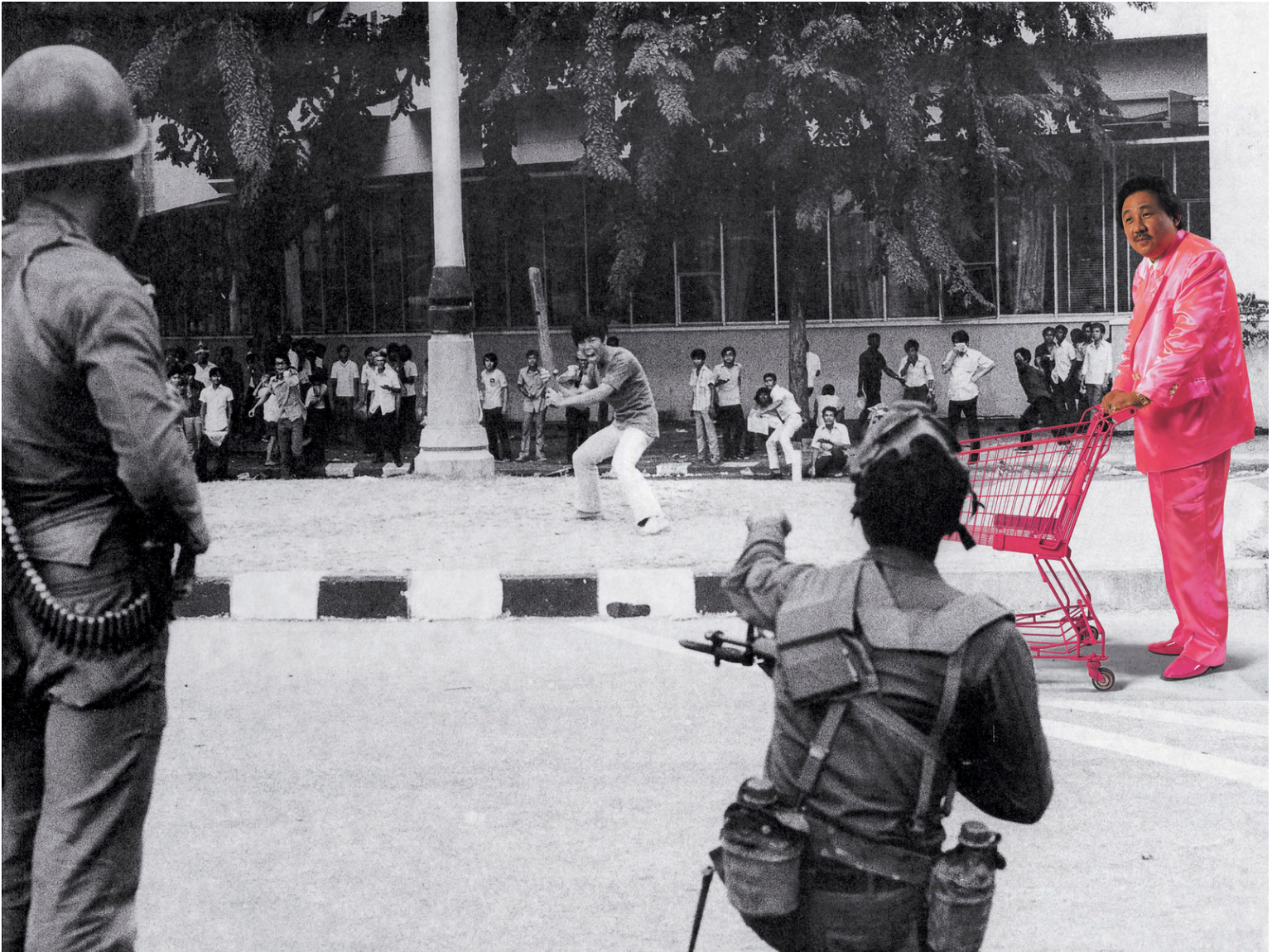 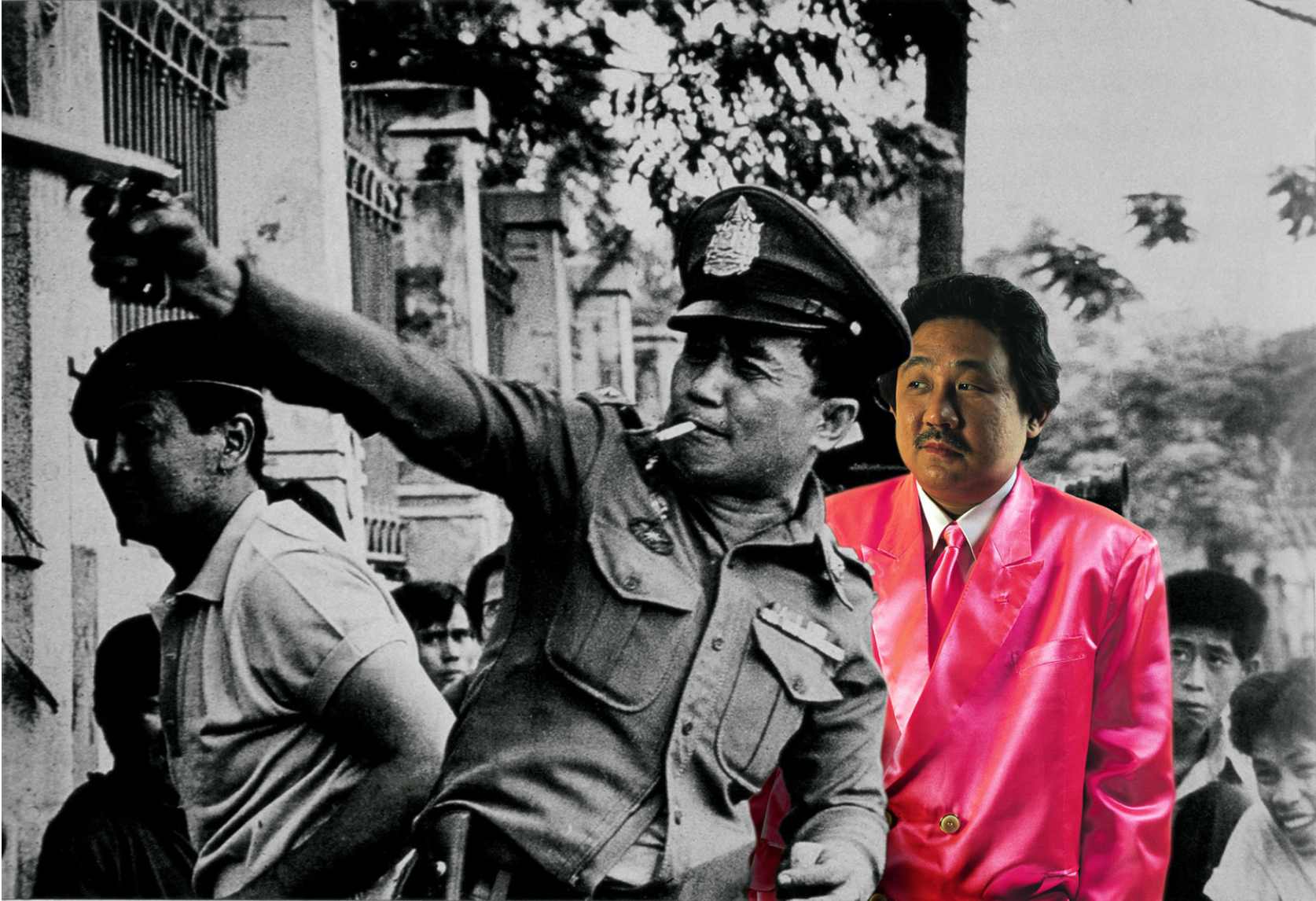 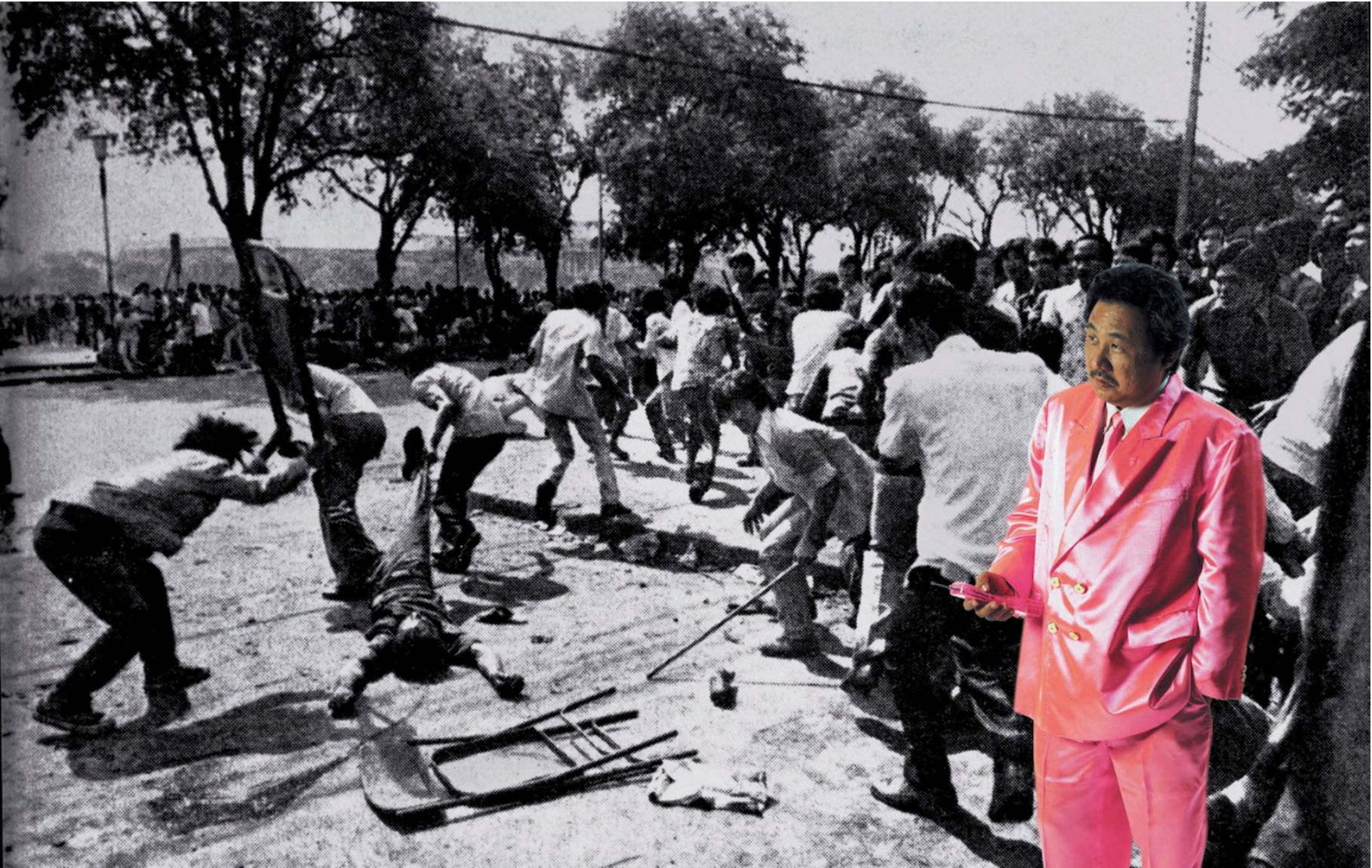 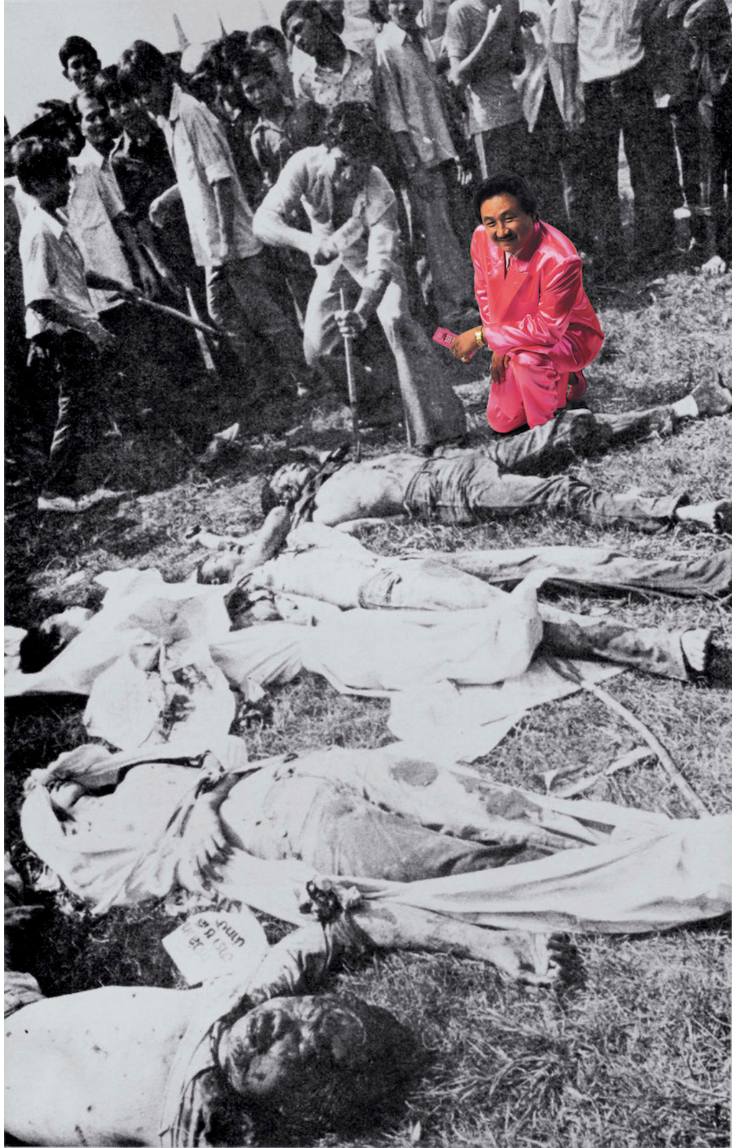 Stop me if you’ve heard this one before. A man in a bright pink suit walks into a demonstration.

In this image from the Pink Man series, from Thai photographer Manit Sriwanichpoom (b. 1961) we see a man with a shiny pink suit and matching shopping cart cluelessly wandering into a black and white scene of armed police and angry civilians. The contrast is a mind-boggling knee-slapper. Who is this pink man?

In the words of the artist himself, the pink man is “a soulless man without a conscience to trouble him [who] amuses himself by joining the ogling crowd”. He inserts himself into various photographs from all over Asia, where he stands inappropriately. It’s simultaneously performative and provocative. Sriwanichpoom starts with an incident photograph by Plaek Khempila, in which we see a crowd responding to the troubling events that took place in October 1976 when liberal students who were protesting against the return of a former military dictator were physically abused and some of them even killed by right-wing mobs. A key instigator of the violence against the protestors was Samak Sundaravej. Because Sundaravej was elected as governor in Bangkok in 2001, Sriwanichpoom’s new image with his Pink Man, published recently after the election, can be seen as a political response against his election.
So how does he do it? Cultural critic Roland Barthes explains that photography has the capacity of comprising “two discontinuous elements”. It is in seeing Sriwanichpoom’s photograph as an embodiment of two discontinuities – one of the horrors of police brutality and the other of the comical pink man, so obviously oblivious, that we can understand how it is possible for both these facets to co-exist. Their coming together demonstrates the way photographers can make a serious point through humorous disruptions.

In his photograph, Sriwanichpoom brings an issue that may have seemed out of our control or too large to tackle, to a place where we can engage with it. The playfulness invites us closer, and from there we’re able to see his argument. Just as a man wearing an all-pink suit with a pink shopping cart in the midst of political upheaval is absurd, the fact that people are not outraged with the election results is also beyond the pale. Sriwanichpoom’s confrontation of the disappointing election illuminates the powerful capabilities play has in photography. Pink Man shows how political photography does not have to document reality to be effective, but rather, it can poke fun instead. In this respect, the coalescence of the discontinuities becomes a space for meaning, a space that prompts us to ask questions, but first, just invites us to laugh.

Manit Sriwanichpoom is represented by Galerie VU’. Pretty in Pink: Photography as Political Resistance was featured in GUP#54, the Playful issue.